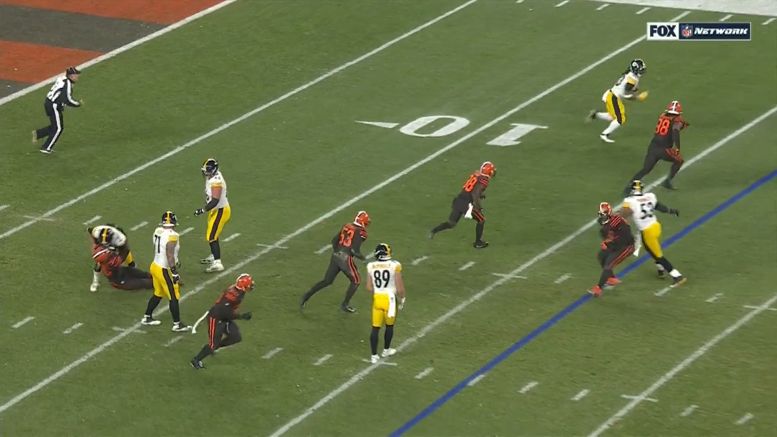 I wouldn’t ordinarily waste my time with nonsense, but given the high-profile nature of the situation and the extent to which I have seen commentators offering defenses for Myles Garrett, even watching hashtags go trending arguing that Mason Rudolph should be suspended, let’s just establish what we already know: Garrett was the instigator.

Let’s set the table first. Every single person I’ve seen, to a man, who was asked about the tone of the game prior to the assault committed by Garrett said that there were no issues. Rudolph said this. Garrett said this. Maurkice Pouncey said this. There was no spark that set off the chain of events that led to the assault. Not even the multiple illegal hits by Cleveland Browns defenders, one of which had already by that point resulted in one of their players being ejected from the game.

And let’s also remember the context. The Pittsburgh Steelers were trailing, 21-7. It was the fourth quarter, with 14 seconds left in the game. The Steelers had possession of the ball on third own 17-yard line, and were facing a third and 29.

Now, to the play itself. The Steelers ran a screen pass to the left side for Trey Edmunds, meaning that Alejandro Villanueva released Garrett, allowing him to get a free rush. Rudolph had to get the ball out really quick, as Garrett was coming in like his hair was on fire.

Rudolph released the ball only shortly before Garrett first made contact with him. While the initial contact was made within the grace period for legal contact on a quarterback in the pocket, it’s also clear that the rusher could have reasonably known that the ball was out.

The problem is what follows. Garrett didn’t let up after the ball was released, which occurred with 13 seconds on the game clock. The defensive end persisted in wrapping both arms around Rudolph, clasping his hands across the quarterbacks’ back, and proceeded to twist and wrestle him to the ground.

For those wanting to continue to blame Mason Rudolph as the instigator, remember, Myles Garrett committed roughing on the play well before anything else happened. From the time the ball left Rudolph’s arm to the time he was finally on the ground, about 3-4 seconds had elapsed. https://t.co/Q01ebQz9oA

Quite a number of television commentators and current and former players have shared highly misleading still images and excerpted clips of Rudolph while he was already on the ground, citing that moment as the instigation. ‘Why is the league not punishing the instigator?’, they plead.

The answer is exceedingly simple: they did.