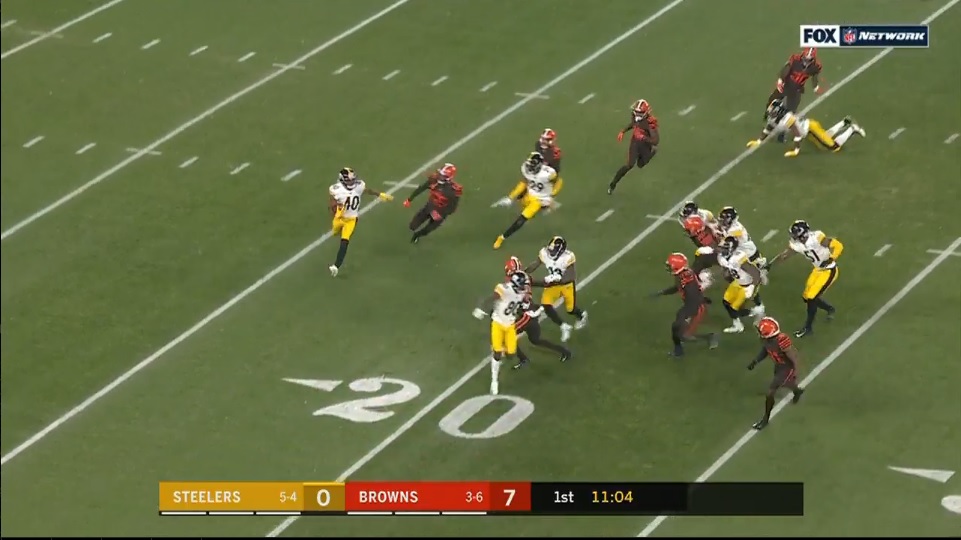 The Pittsburgh Steelers’ can’t block on kick returns. You’re…probably not surprised by that. I’m sure someone is racing to the comments section to scream at me, We’ve been telling you Alex, fire Danny Smith.

And hey, we’ve pointed out their kick return problems time and time again. But it felt like things hit an all-time low on this return Thursday. This is, and I say this with little hyperbole, one of the worst “blocked” returns I’ve ever seen. That’s to say, literally no one was blocked on this return, a 16 yard runback by Tony Brooks-James after the Browns’ first touchdown of the night.

So get ready for the least blocked return in NFL history.

Return to the right, fielded by Brooks-James at the five. Things immediately start off rocky. Two issues right away. Trey Edmunds to the far left, for some reason, takes forever to flip his hips and find his blocker. I don’t know if he’s trying to find him over his shoulder, you see him look to the left while running backwards, but he gets too deep, squares too late, and most importantly, gets square to the field, not the defender he’s responsible for. Being square to the field doesn’t do you any good. So when the defender crosses his face and cuts inside, Edmunds has no chance to make this block. Flails, falls, does nothing.

Kameron Kelly is a turnstile here as well. He’s struggled all year trying to block. Just gets blown up, run through immediately, with poor hand placement and punch. Loses the block immediately, letting his man through. All this forces TBJ to run to his right, not get upfield, and have no chance for a cutback or even the ability to slow down and pick his lane.

Taking these breakdowns in chunks so here’s the first clip of it.

To highlight the issue, literally, as you’ll see below, the entire backside of this play is unblocked. For the players furthest away from the return, that’s by design and that’s fine. You can’t block everyone. Better to run away from some guys. But there’s no support here and like I said, it forced Brooks-James wide and to start running for his life before the return even begins. He’s at the 15 and already facing free defenders.

Ok, the last issue. To the front side. Meat and potatoes of the blocking scheme. James Washington, out there only because of all the injuries (we’ll get to that shortly) loses his block on rookie safety Sheldrick Redwine. That’s why receivers don’t make for good assets in the kick return game. They can barely block corners on offense, let alone safeties in this kind of space.

Brooks-James has to try and cut upfield, the backside pursuit squeezes him, and he’s taken down at the 21 yard line. Just a 16 yard return.

An abysmal attempt at football. There’s literally not one block made on this play. First watching it, I thought Robert Spillane (#41) was the lone exception but after an initial bump, he lost it too. Tyler Matakevich might’ve made the best attempt, though also probably got away with holding, and ultimately couldn’t finish his block either. Perhaps the honor goes to Edmunds, who managed to trip up an oblivious player while on the ground. A literal speedbump and a strategy that would’ve produced better results than what they ended up with.

I’m not trying to be unrealistic either. These blocks are difficult and they’re hard to hold for more than a second or two, unless there’s a double-team. But hold and leverage it enough to let the returner get past you. That’s all you need. Doesn’t happen here.

One other element to consider. Because of all the injuries, this unit is practically brand new. Here’s the depth chart from this return Thursday, after Ola Adeniyi left the game with a concussion.

And here’s how the unit looked in Week 1.

Only four of that original 11 remain: Samuels (who was off this unit until Adeniyi went down), Matakevich, Dangerfield, and Kelly. Samuels and Kelly are just total liabilities here but a lack of options are keeping them on the field. Instead of having a FB and RB as the up-men like the team planned for with Nix and Snell, they have a pair of receivers in Holton and Washington, two significantly worse blockers because as I said, injuries have caused them to run out of people.

At the same time, injuries can’t be an excuse. This unit hasn’t blocked well for about three years now. It isn’t about hitting a home run every time. But it’s a unit wide collapse again and again and again. Issues that go beyond just the return man, as easy as it was to pick on Ryan Switzer.

Since 2017, here are the KR averages of every Steeler who’s fielded a true (not onside, squib) kick.

Aside from that largely forgettable list of names, sans JuJu and his act-of-God 97 yard return in the 2017 finale, Switzer’s average is as good as anyone’s. Third best of the unit and he’s someone who has been dinged by “onside protect” situations, like the nine yarder he had versus the Chargers earlier in the year. Remove even just that one versus LA and his average jumps to 20.1, second best on this list. Far from good, mind you, but that illustrates the fundamental blocking issue that’s plagued this team for far too long.

Since 2017, the Steelers have averaged 19 yards per kick return. That’s dead last in the NFL, a league where the average is nearly 3.5 yards higher (22.4). Meaning, per year, Pittsburgh loses out on about 91 yards in kick returns compared to the average, nearly a full football field.

No matter how you slice it, whatever context you want to add, it’s been terrible. Thursday felt like rock bottom.