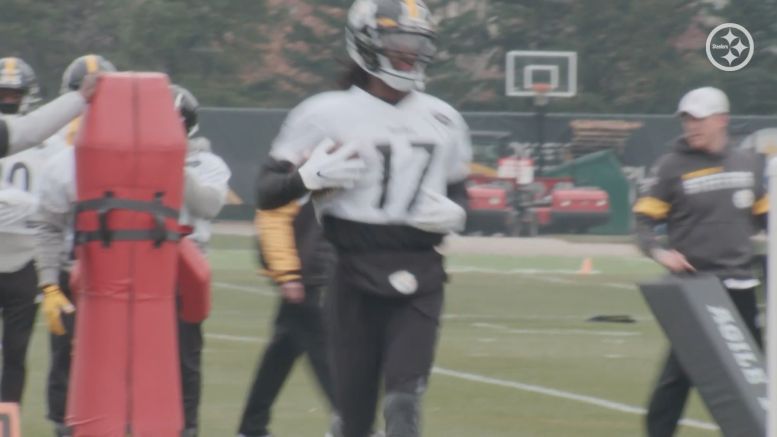 Deon Cain was signed off of the practice squad of the Indianapolis Colts a week ago today. Tomorrow, he may play a prominent role for the Pittsburgh Steelers on offense. Not only did he tell reporters yesterday that he had been working with the first-team offense during the week, he also explained that he and Mason Rudolph were putting in extra time together.

“I definitely did a lot after practice my first couple of days, just to try to get the timing down” with Rudolph, he said. “Even when it was in practice, he wanted me to do certain things. We’d talk on the side just to make little corrections here and there. I know he’s got a lot of confidence in me; I’ve got a lot of confidence in him, so we’re really just going to try to connect well, and at least try to get one for Sunday”.

Cain was signed, after spending most of the year on the Colts’ 53-man roster, following multiple injuries at the position in the Steelers’ last game against the Cleveland Browns. Both JuJu Smith-Schuster and Diontae Johnson suffered concussions, while the former also suffered a knee injury.

The status of the two was an unknown at that time, but Johnson at least will be able to go. Smith-Schuster will not, and has been ruled out. So that leaves just Johnson, James Washington, Tevin Jones, and Johnny Holton, with Cain coming in to add to the mix.

On building a chemistry between the quarterback and wide receiver, Cain told reporters, “it’s going to happen in the game, but it’s more of just timing and stuff. There was a lot in practice that we did, some stuff that we did after practice, too”.

One thing of note is how the Steelers and offensive coordinator Randy Fichtner were using him in practice. They weren’t limiting him to one role, but playing him “pretty much everywhere, really”, he said, “so I could just be comfortable. That really got me to know the playbook a lot more, because they move me around”.

Listed at 6’2” and 202 pounds, Cain is a physical specimen with good speed out of Tampa, but his decision to declare for the draft a year early as a true junior was questioned following the 2017 college season.

Obviously, the Colts felt that the showed plenty of the things that made him slide to the sixth round when they decided to move him off the 53-man roster, signing another wide receiver, Marcus Johnson, off of the practice squad to replace him.

Now he has something of a fresh start in Pittsburgh, and an opportunity to play this week. It may be a limited window to make an impact before Smith-Schuster returns, so he had better take advantage of it.