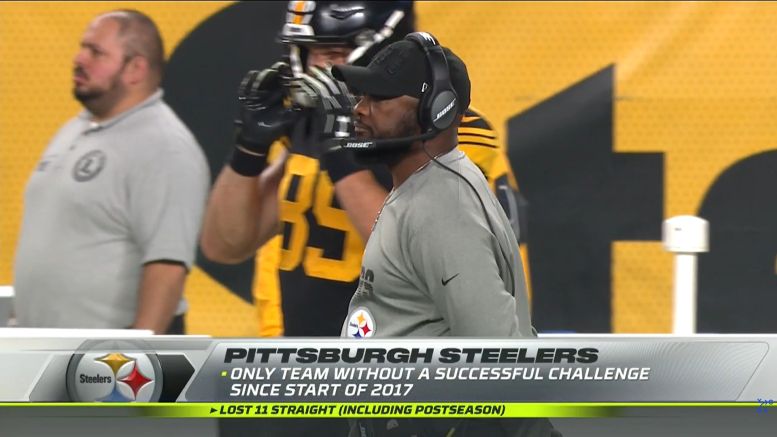 He won his third challenge of the season, on his sixth challenge, on Thursday against the Cleveland Browns. That doesn’t change the fact that they still lost the game, 21-7, in embarrassing fashion, but considering the issues that the team had during the most recent years in successfully challenging plays, this development does have some significance.

During Thursday’s game, Tomlin challenged a play early in the second quarter during which wide receiver KhaDarel Hodge got past Mike Hilton for a big gain from the Browns’ 23. The play was initially ruled as a 59-yard catch-and-run. Hilton, however, immediately felt that he touched Hodge as he fell initially, and thus should be down by contact. Tomlin agreed, and challenged to that effect. He won, and they saved 18 yards in the process.

The Browns still scored a touchdown six plays later, however, starting with a 25-yard completion inside the 10 to Jarvis Landry two plays after the big catch. It looked as though they had stalled the Browns at the seven, but Joe Haden on third down committed pass interference.

Tomlin also won a challenge earlier in the week, on Sunday against the Los Angeles Rams. On the Rams’ second possession, Jared Goff lost the ball, with was initially ruled an incompletion. Tomlin challenged that it was actually a fumble. He won, and the result was a net loss of nine yards for Los Angeles. They would punt two plays later.

Tomlin was less successful the week before against the Indianapolis Colts, although it still baffles me that he lost the first of two challenges. Steven Nelson was called for an ambiguous defensive pass interference penalty on the final drive of the game, but even still, the ball was far over everybody’s head and clearly uncatchable. The league somehow still upheld it, even though they overturned a call as recently as yesterday.

The week before that was Tomlin’s first win on a challenge since 2016, and it was a big one. Miami Dolphins quarterback Ryan Fitzpatrick looked to have scrambled for a first down on fourth and one at the end of the third quarter across midfield in a one-score game. He won the challenge that determined he was down short of the marker.

Tomlin has thrown five challenge flags over the past four games and won three of them. He absolutely should have won a fourth, and nobody is going to convince me otherwise, no matter how ridiculously they carry out the pass interference rule.