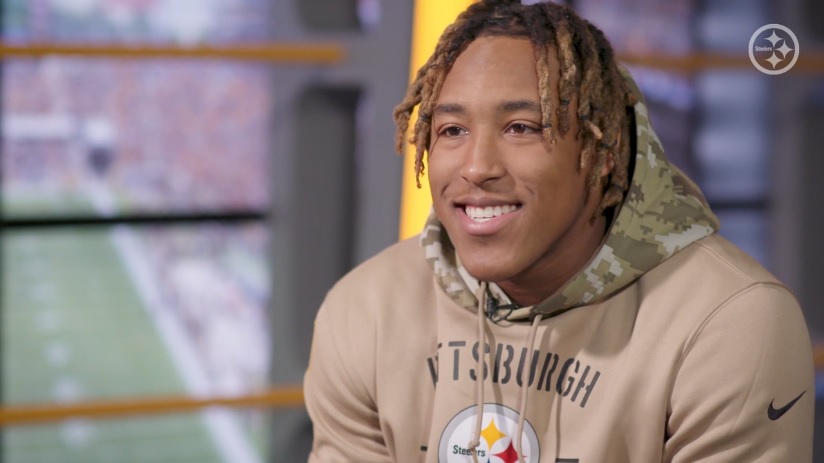 Benny Snell Football means a lot of things. Running hard. Moving the pile forward. Being the dude you can count on to close out a game.

It also means being available. And until last Sunday, Benny Snell spent three weeks in sweatpants on the sideline, held out by knee injury to fix a meniscus tear.

He roared back in a big way to help beat the Cincinnati Bengals, carrying the ball 21 times for 98 yards, and credited the time spent recovering as a chance to open his eyes to the game.

“I always fall back on always being prepared,” he told Missi Matthews in an interview on the team website. “My preparation for the game, that’s what I spend most of my time on. Especially being injured, I got an outside perspective of how the offense looks and stuff. I made sure I was ready.”

Matthews than asked Snell specifically what he learned.

“It gave me a wake up call of how much I love football. I don’t like being away from my teammates. They were out there and I was like, shaking, like I was out there in the cold.”

To my knowledge, it was the first games he missed due to injury, college or pro. How he handled that time sitting out was crucial. All evidence points to him passing that test.

Snell was the first Steelers’ rookie back to carry the ball at least 21 times in a game since Le’Veon Bell did in 2013. He’s one of only five Pittsburgh backs since the merger to do so, joining: Bell, Bam Morris, Tim Worley, and Franco Harris.

In a way, that was out of necessity. There weren’t many options. Kerrith Whyte Jr, while impressive in his debut, just arrived to the city, James Conner remains out, and Jaylen Samuels and Trey Edmunds have been far from inspiring. But Snell showed the conditoning and success and believes he earned the coaching staff’s trust.

Despite being a rookie with only a handful of games under his belt, Snell’s arguably the second best pass protector on this team, only trailing Conner. We found two great examples of him securing the A gap against blitzing linebackers Sunday.

Crazy to say since he's a rookie but Benny Snell is the 2nd best pass protecting back on the Steelers. No fear stepping into the A gap against these LB blitzes. Strong anchor. #Steelers pic.twitter.com/ydn4UqRDju

Even his lone reception was a key one, leaping up to snag a high throw from Mason Rudolph that may have resulted in an interception.

Pittsburgh will need a repeat performance from Snell this weekend against the Cleveland Browns, a vulnerable run defense but one the Steelers had no success against two weeks ago, a game in which Snell was unable to play in.