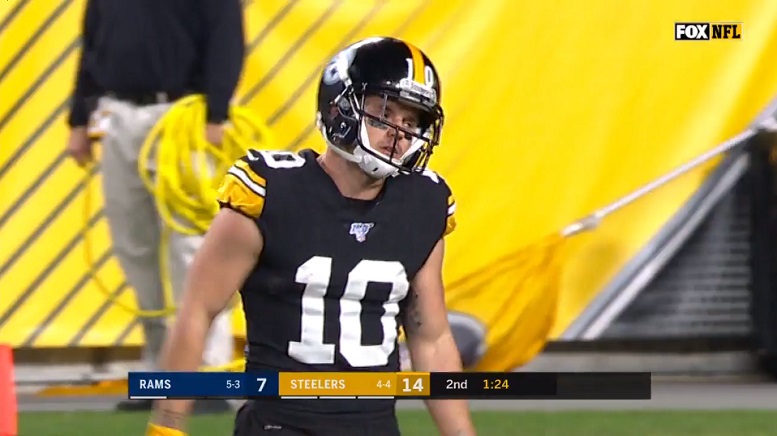 The Pittsburgh Steelers placed wide receiver Ryan Switzer on the team’s Reserve/Injured list on Thursday and barring something total unexpected, his 2019 season is now over with. The unexpected part would revolve around the Steelers ultimately making the playoffs and Switzer returning to the 53-man roster as a designated-to-return player. On Saturday, Switzer tweeted out thoughts of his and he how never envisioned how this season ultimately played out for him.

This was certainly not the way I envisioned this year playing out for me. But, adversity and hardship are necessary to get where we want to be in life. I’m grateful for what God has blessed me with in the midst of this storm and am looking forward to next year! pic.twitter.com/vE7k3KPUEH

If Switzer doesn’t return from Reserve/Injured third season, there’s a good chance he’s played his last play for the Steelers. While Switzer is under contract with the Steelers for the 2020 season at a salary of $735,000, there’s no guarantee at this point that he’ll make the final 53-man roster after the preseason is over with. That said, and assuming he can recover fully from his back injury, he figures to stay on the roster through training camp next season.

Since being acquired by the Steelers in a trade with the Oakland Raiders in late August of 2018, Switzer, a former fourth-round draft pick out of North Carolina, has played just 383 offensive snaps on his way to registering just 44 receptions for 280 yards and a touchdown. 59 of the 81 offensive snaps that Switzer had played this season came in the team’s first two regular season games. Since then he’s played just 22 offensive snaps and in two games he failed to log any playing time on offense.

Perhaps the biggest receiving stat related to Switzer since his arrival is his average catch distance, which is less than 3 yards beyond the line of scrimmage. That’s an extremely low average that’s only made acceptable if the yards after catch average is strong. In the case of Switzer, it’s not.

Switzer is already on his third team since being selected originally in the 2017 NFL Draft by the Dallas Cowboys and only has 50 career receptions in 41 total games played in. Stats like that aren’t conducive to stating in the NFL long.

The Steelers have a good core of young wide receivers in JuJu Smith-Schuster, James Washington and Diontae Johnson and you can bet that group will be added to during the 2020 NFL Draft, and potentially free agency as well. While Switzer is likely to be retained all offseason and once again be a training camp participant, he’ll have a very hard time making the 53-man roster come September.

Switzer’s a fine human being and has a done a lot of great work off the field since arriving in Pittsburgh. He’s seemingly been a model teammate to boot. However, Switzer’s lack of production as a wide receiver and returner are two key factors that are tough to overlook so it’s not hard to envision his final punt return against the Rams that you see below as potentially being the last time he plays in a regular season game for the Steelers.

For now, we wish Switzer a speedy recovery from his recent back injury and look forward to him competing for a roster spot again next season.