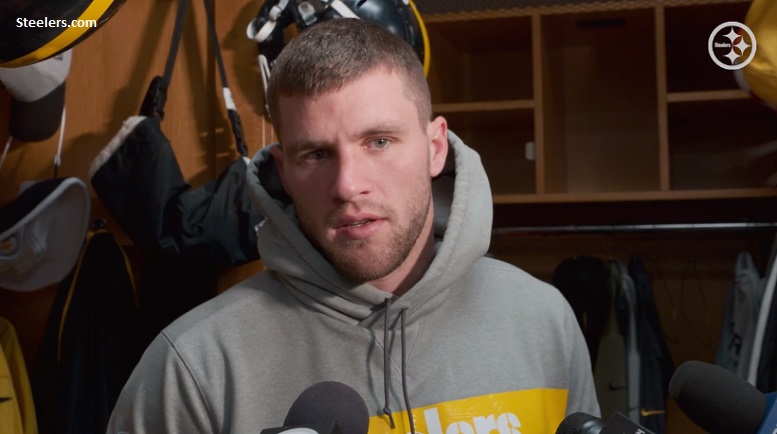 It’s still unclear if Pittsburgh Steelers outside linebacker T.J. Watt will be able to play Monday night against the Miami Dolphins due to an abdominal injury that he suffered at some point during the team’s Week 6 Sunday night win over the Los Angeles Chargers. While the team’s Thursday injury report, the first official one of Week 8, will likely shed a little light on Watt’s current overall status, the former first-round draft pick was asked how he’s feeling ahead of practice getting underway.

“I feel a lot better,” Watt said. “I’m going to take it day-to-day right now and see where I’ll be on Monday night. So, right now we’re day-to-day.”

Even if Watt does wind up playing Monday night against the Dolphins the Steelers are almost certain to rotate him out of the game as much as possible. To date, Watt has played roughly 86.1 percent of all defensive snaps played so far this season with 51 of his 374 in total coming against the Chargers. Watt talked on Thursday about the importance of attempting to stay fresh throughout games by being rotated out as much as possible

“We try to rotate more and more each week,” Watt said. “I think if you look at the L.A. Chargers game, I think I played 81 percent of the snaps. So, I mean, trying to stay fresh for the end of the games is a big thing for us. And obviously we want to be out there as much as we possibly can but trying to be smart and not play 70 to 80 snaps a week is something you don’t want to do as an outside linebacker.”

“Yeah, I have a lot of confidence in Ola,” Watt said. “I mean, he had a really good training camp and I think even this year with the limited reps that he has gotten, he’s been able to go out and perform and get a few tackles. And I know he has a really good pass rush resume, too. So, I’m very confident with anybody who is in the game, especially Ola, just being able to be around him every day in the meeting room and on the field.”

Watt also doesn’t think Adeniyi will have any sort of drop off in play Monday night regardless of the side he lines up on.

“Yeah, he can play both sides,” Watt said.

We’ll see what the Thursday injury report has to say about Watt’s practice participation level, but odds are good he might be listed as limited. Hopefully he can play some Monday night as he has been a force as a pass rusher for the Steelers so far this season.