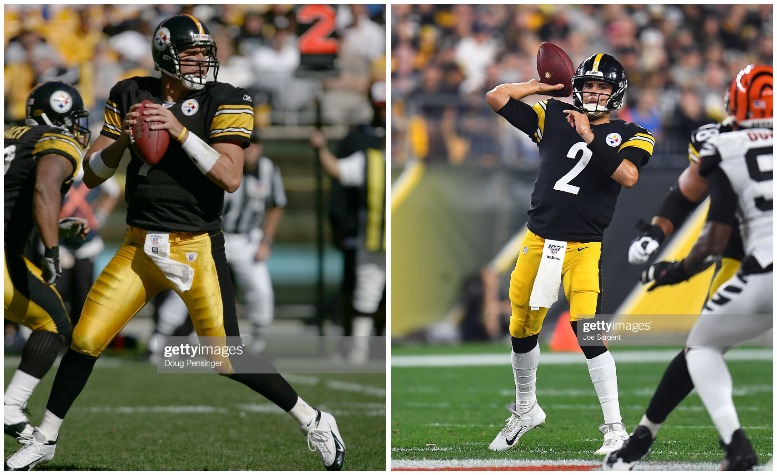 Pittsburgh Steelers quarterback Mason Rudolph will make his third career start Sunday at Heinz Field against the Baltimore and it will be a big game for the third-round draft pick out of Oklahoma state. While Rudolph has been far from awful in the 10 quarters of football he’s played since taking over for the injured Ben Roethlisberger, the one noticeable thing that’s stuck out so far about his play is that he doesn’t push the football down the field much and that’s easily backed up by his 6.0 average intended air yards stat.

Rudolph not pushing the ball down the field much through 10 quarters of play might can be partly blamed on him not only being willing to pull the trigger on a few throws he had available to him as well as the coaching staff not calling for him to do very often. He’s played a very conservative style of football through 10 quarters and has done so reasonably well.

Following the Steelers Monday night win over the Cincinnati Bengals, a narrative seems to have started making the rounds concerning Rudolph and the coaching staff babying Rudolph too much. additionally, part of that narrative seems to be that Roethlisberger was also babied too much by former head coach Bill Cowher and offensive coordinator Ken Whisenhunt during his 2004 rookie season. in short, that part of the narrative is mostly centered around Roethlisberger allegedly being forced to play a lot of small ball early during his rookie season much like Rudolph has through his first 10 quarters of play in the NFL. That part of the narrative is false.

I recently charted the second and third career starts of Roethlisberger against the Bengals and Cleveland Browns and below is the data from both of those games. I didn’t chart his first career start against the Miami Dolphins because that game was played in extremely bad weather and on a muddied and chewed up field.

In the Week 4 game against the Bengals, which was Roethlisberger’s second-career start, he completed 17 of his 25 total pass attempts for 174 yards with one touchdown and no interceptions. 11 of his 25 pass attempts went 10 or more yards past the line of scrimmage and five of them were completed. Five attempts went more than 15 yards past the line of scrimmage and in the NFL those throws are considered to be deep ones. Roethlisberger completed just one of those throws, however. Roethlisberger’s average intended air yards for that Week 4 game was a stellar 12.6 and his average completed air yards was an acceptable 7.1. Sure, he only threw for 174 yards, but that doesn’t tell the whole story. 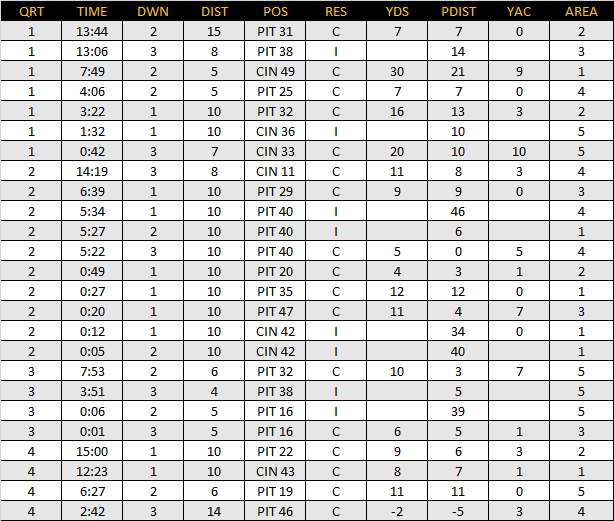 In Roethlisberger’s third career start against the Browns, he once again pushed the football down the field with regularity. He completed 16 of his 21 total pass attempts in that game for 231 yards with one touchdown and one interception. That interception, by the way, was not on him as wide receiver Antwaan Randle El juggled a very catchable pass that landed in the arms of a defender, who then returned it for a touchdown. 11 of Roethlisberger’s pass attempts in that game flew 10 or more yards past the line of scrimmage and eight were completed. Four of those attempts traveled more than 15 yards and three were completed. Roethlisberger’s average intended air yards for that Week 5 game was a stellar 12.1 and his average completed air yards was a super robust 11.5. While Roethlisberger only attempted four second half passes in that game against Cleveland, it’s important to point out that the Steelers had 14-point lead at halftime and a 21-point lead with 8:26 left in the third quarter. 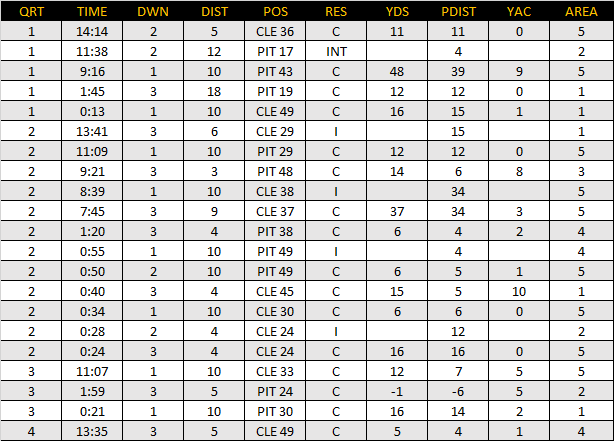 It should be clear by now that Roethlisberger pushed the ball down the field with regularity in his first few starts and not only that, he was effective when he did so. His passing yards might not reflect that, but his average completed air yards stat sure does. Had his pass catchers provided a little more yards after the catch on those 33 completions in those two games, perhaps people wouldn’t be cherry-picking his pass yardage as much as they appear to be doing 15 years later.

to finish out this post I thought I would also touch on Roethlisberger 2004 Week 8 game against the New England Patriots as it seems quite a few people have a short memory when it comes that contest. 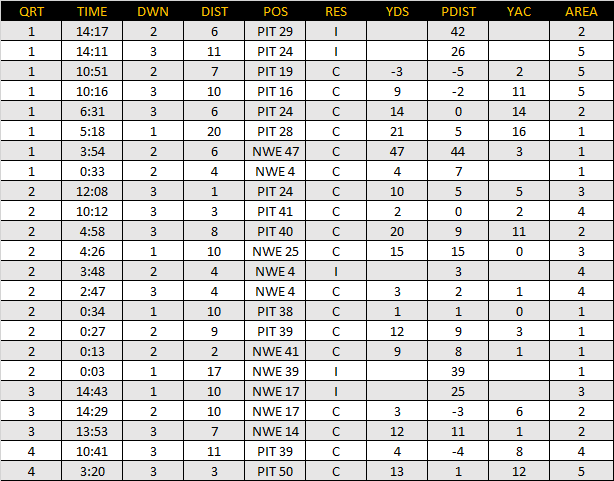 While Roethlisberger essentially had the air taken out of the football in the second halves of these three games, he still pushed the football down the field with regularity and especial in the first 30 minutes of play in each. The Steelers had a good running game in 2004 in addition to a good defense and that made the decision easier to sit on second half leads.
We’ll revisit Rudolph’s passing stats after he plays in a few more games and see if he’s started to push the football down the field with more regularity like Roethlisberger did during his rookie season.