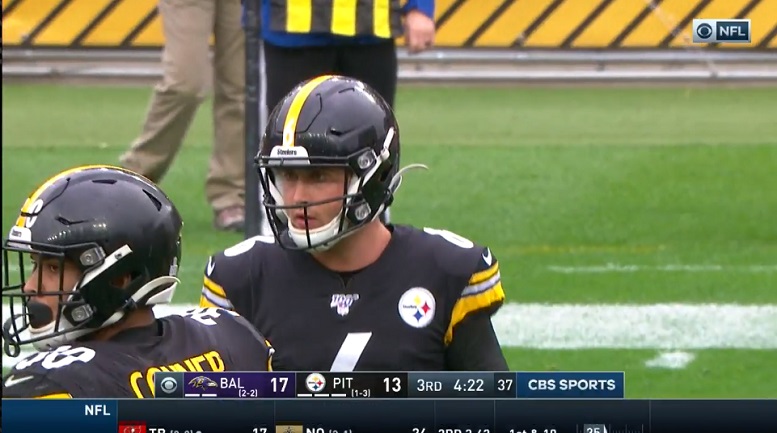 Pittsburgh Steelers backup quarterback Devlin Hodges made his NFL debut in Sundays loss to the Baltimore Ravens as the rookie undrafted free agent out of Samford was forced to relieve starting quarterback Mason Rudolph early in the quarter after he was knocked out of the contest with a concussion.

After entering the game in placer of Rudolph with 7:17 left in the third quarter, Hodges drove the Steelers offense down the field for a touchdown. He completed two passes on that scoring drive for 27 yards.

Hodges led the Steelers offense to one more score in the fourth quarter, a 33-yard field goal by kicker Chris Boswell and he finished the game having completed seven of his nine total pass attempts for 68 yards. One of Hodges passes was intercepted but wiped out by a defensive holding penalty.

After the game, Steelers head coach Mike Tomlin was asked to assess the play of Hodges on Sunday.

“You know, I thought he represented himself well,” Tomlin said. “He gave us a chance and you’ve got to tip your cap to him. You’re talking about a guy that didn’t make our opening 53 [man roster] and all of those things. We know his story. But you’ve also got to acknowledge that he’s done some good things at every step along the way through the team development process when given an opportunity and that’s why he’s in a position that he’s in. That’s probably why he made the positive showing in spots that he did today.”

Hodges was signed to the Steelers 90-man roster after a successful rookie mini camp tryout. He went on to represent himself well during the preseason in limited game action. After being waived ahead of the start of the regular season, Hodges found himself back in Pittsburgh and on the 53-man roster after quarterback Joshua Dobbs was traded away and Ben Roethlisberger was lost for the season in Week 2 to an elbow injury.

Hodges did do a good job of pushing the football down the field after taking over for Rudolph and seemingly had the Steelers driving for a potential game-winning field goal in overtime had wide receiver JuJu Smith-Schuster not fumbled away a catch following a 10-yard pass from Hodges.

We’ll now have to wait and see what transpires with Rudolph and his concussion. The Steelers next play the Los Angles Chargers on the road Sunday night and if Rudolph is not cleared to start that game, Hodges will be forced to make his first NFL start. The Steelers will also likely need to promote one of the two quarterbacks on their practice squad to their 53-man roster next Saturday. Those two quarterbacks are Paxton Lynch and Taryn Christion, who was signed to the practice squad this past week to imitate Ravens quarterback Lamar Jackson.