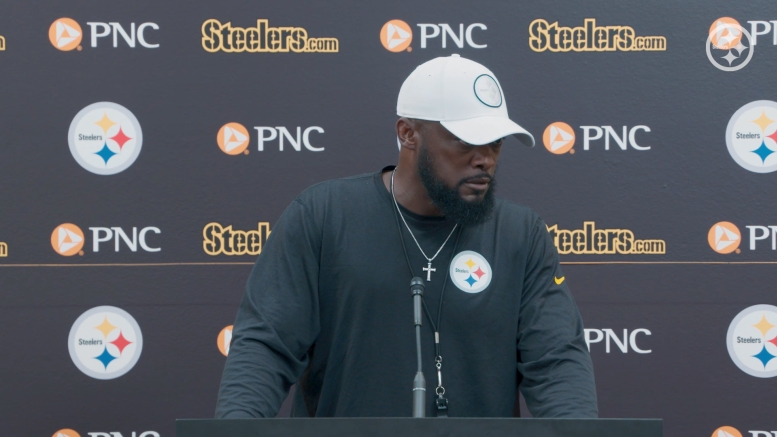 The Pittsburgh Steelers are understaffed in terms of talent on the 53-man roster due to injuries, and at key positions. They are in dire need of some victories, having lost four of their first six games. They have won two of their last three, however, and their success during that time hasn’t necessarily been pretty.

But you don’t have to win pretty to win. You don’t have to follow any type of formula or narrative to walk out of a stadium with you head held high. The only thing that you have to do is what is necessary, and that is a moving target.

Head coach Mike Tomlin was asked yesterday whether or not he anticipated the Steelers returning to a more pass-heavy approach when Mason Rudolph gets back, after they rushed 36 times on 56 offensive plays in their victory over the Los Angeles Chargers.

“I’m not anticipating anything other than us doing what we need to do to get out of stadiums with wins”, he said. “We’re not in the type of state that we can make any type of bold predictions about personality and things of that nature. We’re gonna do whatever’s required for us to secure victory week in and week out”.

It might not be beautiful. It might not even be very fun. But the Steelers are and have been for most of the season in the midst of a war of attrition, both with their opponents and with themselves as well, as they grapple with internal conflagrations both infliction upon them and produced by themselves.

They have major injuries to players like Ben Roethlisberger and now Stephon Tuitt. They traded arguably their best player on the team in Antonio Brown, though he gave them little choice. They spent in free agency and made bold moves in the draft, but that all comes with new faces and new variables, changes that have to be adjusted to, which is a process and takes time.

Part of that is finding contributors. “We don’t care where the plays come from”, Tomlin said. “We’re not in style mode. We’re not even in personality mode. We just need to do what’s required to move the chains, to ring up the scoreboard, to score one more point than our opponent in an effort to win football games”.

No one factor is bigger than that of the quarterback position, of course. Working with Rudolph and Devlin Hodges, two young players who never threw a professional pass before the start of this season, they are naturally going to be limited, at least in the early goings, in what they are able to do with any sense of comfort or confidence offensively.

Especially in light of the fact that they had been losing games in the process. They were 0-3 in their first three games, and half of that time was still spent with Roethlisberger. Then they had the adjustment period to Rudolph, and then Rudolph himself missed a game due to a concussion.

That’s largely why they’re in a 2-4 hole, and why they have no margin for error. That’s why they can’t worry about how anything they do looks, aesthetically. The only thing that matters is if it contributes to their efforts to score one more point than their opponent.

“We’re in a fragile state from a health standpoint, from a depth standpoint. In the midst of that, we’d better find ways to win football games”.