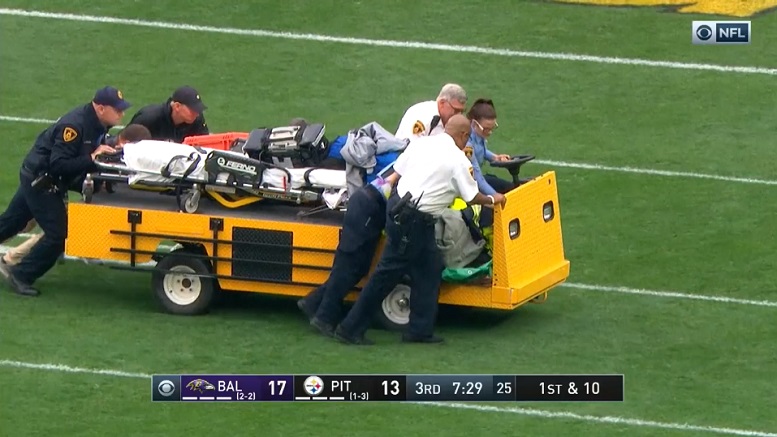 After being knocked out cold in the third quarter of the Pittsburgh Steelers Sunday home loss to the Baltimore Ravens, it appeared as though quarterback Mason Rudolph would be carted off the field to receive additional medical attention. However, that cart ride never happened and it’s been a minor topic of discussion making the rounds ever since.

After first sitting up, Rudolph ultimately walked off the field with some assistance while the cart that had been brought on to the field to carry him off was shown being pushed off by personnel. After the game, head coach Mike Tomlin was asked if he knew why Rudolph had to stand up and kind of walk off the way he did while the cart was still out on the field.

“Ask somebody that’s in charge of that. I don’t drive carts and things of that nature,” Tomlin tersely responded.

Not long after the Sunday game had ended, Gerry Dulac of the Pittsburgh Post-Gazette reported that a Heinz Field source told him that the cart that would have transported Rudolph failed because of operator error, not because it broke down. He also added that the NFL had already been called to investigate. Additionally, Dulac reported that Rudolph wanted to walk off the field, not be carted.

On Tuesday during his weekly press conference, Tomlin was again asked about the Sunday cart incident and if he was annoyed that the vehicle did not function properly and if he’s had a chance to investigate what had happened.

“Whether or not the cart was functioning is irrelevant to the fact that he walked off the field. And to be quite honest with you, I didn’t know that the cart wasn’t functioning until after the football game because I was more concerned with Mason As he got himself together and was able to walk off the field, he was dialoguing with me and others and that’s really kind of where our attention was. I didn’t realize that the cart story was such a story, even when I addressed you guys after the game.”

Tomlin was then immediately asked if he found it unusual the way Rudolph was walking off the field having to be carried off by two people.

“No, because, number one, I’m not a medical expert and the people that we have a great deal of trust in were there with them,” Tomlin said. “They made the decision that it was safe for him to do so. He had a desire to do so and so we didn’t analyze that overly, no.”

As out of it as Rudolph still seemed to be while being helped off the field Sunday, it’s amazing the medical personnel who were tending to him let him avoid a cart ride. Quite honestly, it should have been mandatory for another cart to be summoned if the one out on the field wasn’t operating properly.

Rudolph, by the way, was transported to a local hospital before the game ended for further evaluation after walking off the field with assistance.

It will be interesting now to see if the NFL looks deeper into cart gate if they find anything else.