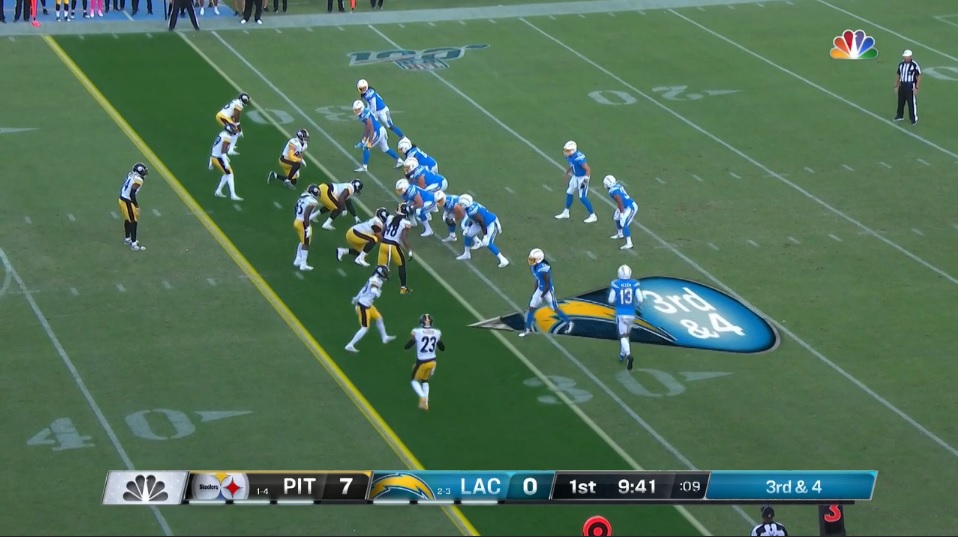 The Pittsburgh Steelers’ defense has taken a monster step forward this year. There’s no doubt about it and it’s good timing because they’ve been – and will need to continue – to be the strength of this team.

However, there is one area I’d tweak. Their dime defense.

Predictably, the Steelers have scaled back their use of dime thanks to more depth at inside linebacker. Last year, they had to role with one ILB and a 6th defensive back. This year, they get to do it when they want to. No question, that’s critical, and they’re better because of it.

Another reason why they’ve used it less is because it isn’t as effective. After failing to use dime at all in their win over the Cincinnati Bengals, here are the results of Pittsburgh’s dime defense the last two weeks.

That’s not terrible but the 13 first downs are an issue. Looking beyond the box score, there have simply been too much miscommunication with 6 DBs on the field. Partly due to them running it less, I’m sure it isn’t repped as much in practice.

Like Josh Gordon’s touchdown in Week 1. Steven Nelson blitzes, no one covers, and it’s pitch and catch with Tom Brady.

Or two weeks ago versus Baltimore. 3rd and 8, safeties don’t rotate correctly (Minkah Fitzpatrick needed to drop down) and Mark Andrews picks up an easy conversion.

There’s also a personnel problem too. The dime defender this year has been Kameron Kelly and flat out, he’s struggled this year. Here are his stats when targeted this season: 4/4 49 yards, 1 TD, 0 INTs

And the numbers don’t tell the entire story. He’s only been on the field for 79 pass plays all year and those numbers don’t include his hilarious lack of awareness against the Seattle Seahawks or blown assignments. Sunday was a particular sore spot. Two plays to highlight it. First, a missed tackle that allowed a 15 yard gain and first down and third down conversion given up to TE Hunter Henry.

Not all the blame goes on Kelly. That’s obvious. Issues can exist at all levels and I’m sure you can blame coaching to some degree too. But his play hasn’t been good enough and that fact was a driving reason in the team acquiring Fitzpatrick after Sean Davis tore his labrum.

Here’s what I would suggest. And it’s a super simple swap. In dime this year, Cam Sutton has come in to replace Mike Hilton at slot corner. It’s a fair decision, Sutton is better in coverage and at the catch point, but they’re comparable players. So don’t make a choice. Leave both on the field, Hilton and Sutton.

Sutton probably can stay in the slot. Let Hilton be the dime piece, the movable defender of the unit. Playing safety isn’t new for him anyway. He did it in college, his position at Ole Miss was literally “Rover,” and he’s worked at safety in training camp and somewhat extensively during the preseason too. He can blitz, tackle with power, cover over the slot, or rotate to the middle of the field. All that’s in his wheelhouse. Plus, he’s more experienced in this defense and makes fewer mistakes.

He’s the better player than Kelly and there’s little downside to the idea. At worst, you’ll have to make sure he gets the reps in practice and yes, he would be shuffled around, but he’s smart and experienced enough to do it. It’s a minor concern.

It’s a simple, obvious concept. Play your best players. Hilton and Sutton are those guys, not Kelly, and you’d use them without altering your scheme one bit. One personnel change is going to make a substantial difference.