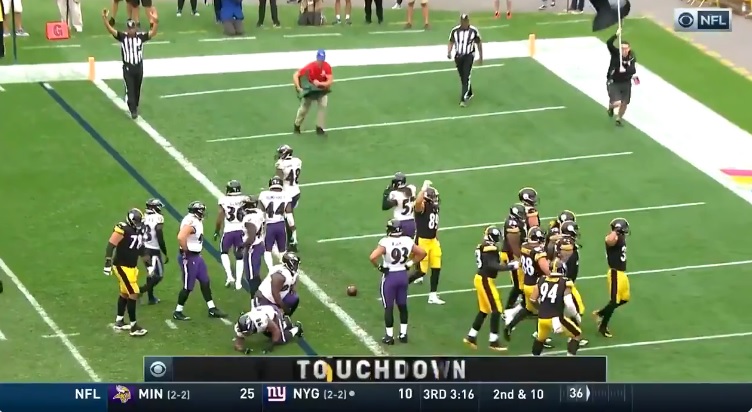 Winners and losers from the Pittsburgh Steelers 26-23 loss to the Baltimore Ravens Sunday afternoon.

Mason Rudolph: Rudolph played a strong game before getting knocked out with one of the most violent collisions I’ve ever seen. The play he was injured on was his best, avoiding a sack, keeping his eyes downfield, and hitting James Washington to move the sticks. Again, he showed overall efficiency and I liked his pocket presence, feeling the rush and showing the ability to slide and buy precious time.

Defensive Playmakers: The defense again stepped up and you can’t point to just one player. Devin Bush redeemed himself for a horrendous 4th down offisdes to intercept a pass down the seam players later. Mike Hilton had a TFL and interception, TJ Watt was disruptive, and Minkah Fitzpatrick tipped a pass that led to a Kam Kelly pick.They’re up to 12 takeaways this season, as many as they had in 12 games last season.

Chris Boswell: Boswell has been as consistent as anyone on this roster. In wet, windy conditions, he was perfect on his field goals and extra points. Have snubbed him from this list before and don’t want to make that same mistake again. Good stuff from #9.

Devlin Hodges: So you’re first NFL action is in a must-win game against the Baltimore Ravens. Hodges was saved from a rookie interception, throwing across his body, negated by a defensive holding call. He wasn’t afraid to sling it, run it, and moved the offense well enough. Big props to him considering the circumstances you’re certainly aware of. What a performance.

Randy Fichtner: Fichtner was in a difficult spot by game’s end without his starting QB and losing WR James Washington but there were too many questionable decisions before it got to that point. Running Wildcat early, which was never going to fool the Ravens, and then attempting a pass with Jaylen Samuels where the payoff, at best, would’ve been a short gain. He turned a 2nd and 1 deep inside the red zone into a 4th and 17 – again, in part thanks to the Wildcat – which was as ugly as it gets.

Johnny Holton: Holton got the party started with a terrible decision to take the ball out of his end zone on the opening kickoff, playing right into the hands of what Baltimore wanted. His return only came out to the 11. The Steelers again targeted him deep and the pass was incomplete, making him 0/4 on the season. It’s fair to question what value he brings to the team.

Refs: Not one to talk about the refs immediately after the game but they were brutal Sunday and honestly, there aren’t a lot of other losers to add here. They reviewed plays that didn’t need to be looked at for so long – James Conner clearly crossed the goal line, for example – took forever to rule a Rudolph incompletion (initially calling it a TD), and the roughing the passer call on Ola Adeniyi was bogus.

JuJu Smith-Schuster: Of course, I wrote the above “aren’t a lot of other losers” prior to what happened to JuJu in OT. Just like the Saints game last year, Smith-Schuster’s late-game fumble changed the course of the game. He played well prior to that and gutted out a toe injury but that was brutal. And may have just ended the Steelers’ season.