Even though the Pittsburgh Steelers are now on their bye week you can probably expect offensive coordinator Randy Fichtner to spend a little extra time on working on pass plays that include the football being pushed down the field more than 15 yards past the line of scrimmage. That’s because the Steelers enter Week 7 of the 2019 NFL regular season as the worst deep passing team in the NFL and it’s not even closely contested. 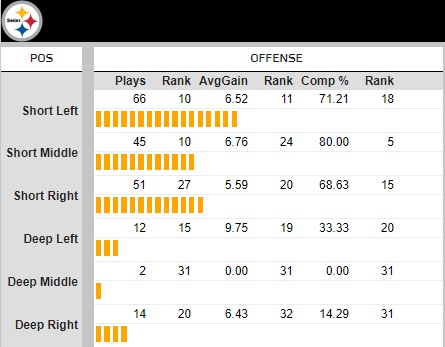 In total, Steelers quarterbacks have attempted 28 deep passes through six games, and they’ve completed just six of them for 207 yards with two going for touchdowns and three others being intercepted. One of those intercepted passes that came on a pass from quarterback Mason Rudolph to wide receiver Donte Moncrief, was technically thrown less than 16 yards but was ultimately intercepted by a Seattle Seahawks defensive player after clanking off the hands of Moncrief.

As far as the deep pass target distribution goes for the Steelers through six games, wide receivers Diontae Johnson and James Washington are tied for the team lead in deep pass targets with six each. Johnson caught two of hi targets for 82 yards and both were touchdowns on passes from Rudolph. Washington’s lone deep reception came way back in Week 1 against the New England Patriots via a pass from Ben Roethlisberger, who was 1-of-11 on his deep pass attempts in the game and a half that he played in before suffering his season-ending elbow injury.

Explosive plays and turnovers play big parts in wins and losses every week and the Steelers offense needs to increase the amount of the former while working harder to have none of the latter. Rudolph completed his fair share of deep pass attempts during his college career at Oklahoma State and so it’s time for him to start delivering a few of those on a weekly basis in the NFL.

The Steelers will host the Miami Dolphins and Indianapolis Colts in their first two post bye games and both of those team’s defenses have been horrible when it comes to defending against deep pass attempts. If the Steelers offense can’t get their deep passing attack on track against those two teams, you must wonder if they’ll ever be able to throw deep much of any during the second half of the regular season.