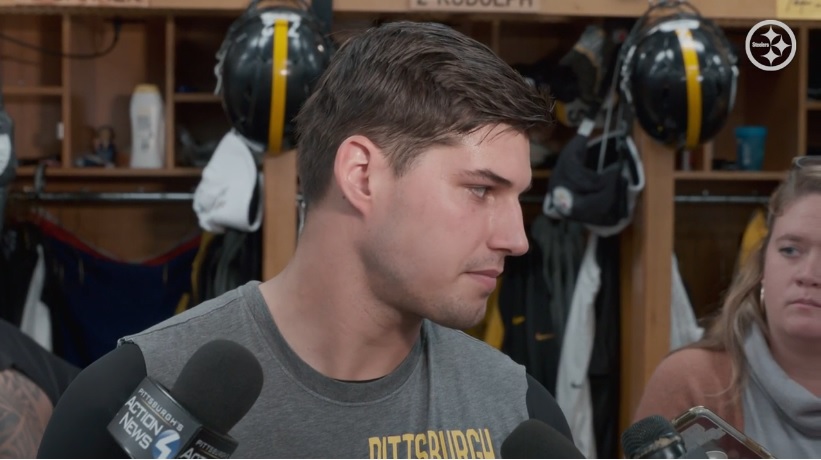 Mason Rudolph’s even admitted how scary the hit he took in Week 5 look. His offensive line knew immediately he was injured, trainers rushed onto the field, JuJu Smith-Schuster practically fainted after he saw Rudolph lying on the ground.

But after fully recovering and being cleared to take the field Monday night against Miami, Rudolph isn’t worried about getting hit again.

“My dad’s a linebacker,” he told reporters via the team website Thursday afternoon. “My brother’s a defensive end. A lot of times I wish I could have more contact in a game. I love it. That’s kinda the backyard player I am. If anything, I’ll be seeking out contact early in the game to [shake the rust off] and know what it feels like to get hit.”

Rudolph may be the only person in the organization who would endorse his “more contact” slogan but his confidence and lack of concern for getting hit again is encouraging. The problem is with the way the Steelers’ line is protecting, Rudolph might not have to wash his jersey by the time Monday night is finished. Through six games, Pittsburgh’s allowed just five sacks, the fewest in the NFL and a franchise record low.

“They’ve done that for a long time. They’ve been somewhere at the top for the best group in the league. Takes a lot of pressure off me knowing I, or whatever quarterback is back there, but especially myself, we’re going to be safe. And they’re going to help our team not only in the run game, whether that’s first, second down, and extend time for me in the pocket to make plays.”

Rudolph’s been sacked just three times this season. His 3.1% sack rate is second-best of QBs with at least 75 pass attempts, trailing only Eli Manning who was benched two games into the year. Ben Roethlisberger sported the same 3.1% sack rate before season-ending elbow surgery and Devlin Hodges wasn’t sacked in his lone start against the Chargers in Week 6.

Miami’s pass rush is far from intimidating either. As a unit, they’ve recorded just seven sacks with only two players – Taco Charlton and Vince Biegel – have more than one. The Steelers are at a clear advantage in this one, especially if they build an early lead and can grind things out with the run game.