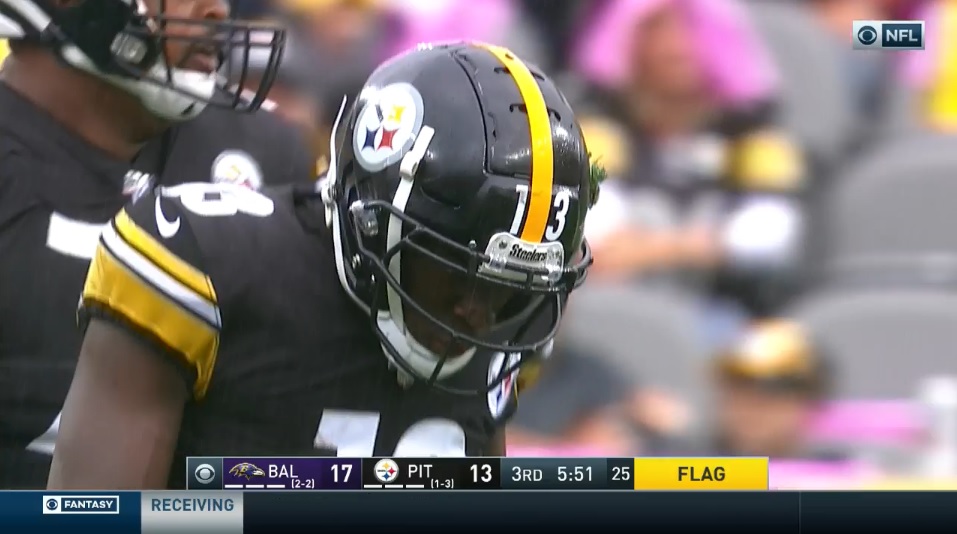 Pittsburgh Steelers WR James Washington is expected to miss “a few weeks” due to his AC sprain in his left shoulder, according to this tweet from NFL Network’s Ian Rapoport.

#Steelers WR James Washington is expected to miss a few weeks with a shoulder injury suffered on Sunday, source said. Another challenge for either Mason Rudolph or Devlin Hodges this week.

Washington suffered the injury attempting to catch a pass on a busted screen play in the second half of Sunday’s loss to the Baltimore Ravens. He was in immediate, obvious pain right away and left the field. Reporters spotted him in a sling yesterday.

At his press conference Tuesday, Mike Tomlin would only say that Washington was being “further evaluated.” Vance McDonald missed one week with a similar injury.

With Washington almost certainly out for at least this Sunday, Donte Moncrief figures to be given the chance to catch the boomerang again. He should be active after sitting down last weekend. It will also mean more snaps for Johnny Holton, who has primarily been a deep threat yet to catch any of his four targets this season. If the team wants to keep JuJu Smith-Schuster at the Z spot even more, Ryan Switzer could log more reps in the slot when the Steelers use three receiver sets. He played only two offensive snaps last week but they were his first since Week 2 against Seattle.

Washington is coming off his best week to date, catching three balls for 52 yards. He has nine receptions for 140 yards in 2019.