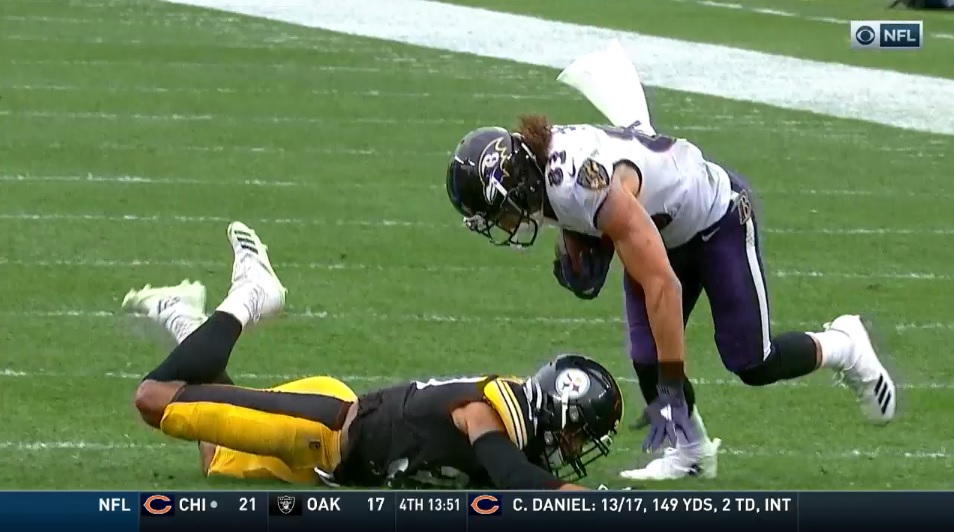 We’re a few days removed from Sunday’s 26-23 loss by the Pittsburgh Steelers to the Baltimore Ravens, and it still stings as much as it did on Sunday afternoon.

That was a winnable game that they let slip away.

Speaking of letting things slip away, the Steelers really struggled to tackle on Sunday, which shouldn’t be much of a surprise. Lamar Jackson is the most elusive quarterback in football, while Mark Ingram and Gus Edwards are physical, punishing runners that thrive after contact.  I have Jackson down for 4 forced missed tackles out of the 10 the Steelers recorded on Sunday.

Fortunately, no misses led to explosive plays for the Ravens.

For the second straight week Terrell Edmunds missed 2 tackles defensively, which is starting to get a bit frustrating. On Baltimore’s first drive he missed a tackle on Ingram, and then in the second half he combined with Vince Williams to overrun an angle on Jackson near the left sideline, allowing the quarterback to slip back inside and get up the field. Bad angles and Edmunds make a great pair right now.

TJ Watt struggled in the tackling department on Sunday, and honestly, both missed tackles came on plays where he looked absolutely gassed. Watt is a star defender that rarely misses tackles, so it was puzzling to see him whiff twice on Sunday.

Minkah Fitzpatrick has been an awesome addition to the Steelers’ defense this season, but he’s struggling to wrap up coming downhill on receivers at the catch point.

Devin Bush’s miss was similar to the one he had against Seattle. He let up near the sideline on Jackson early in the first quarter, thinking the quarterback would slip out of bounds. Jackson stopped on a dime though and let Bush slide past before picking up a few extra yards.  The rookie needs to clean those types of plays up.

With all of that said, let’s take a look at some of the misses from Sunday’s game.

Stephon Tuitt had a monster game yet again for the Steelers, but he missed a shot at sacking Jackson early in the game.

I don’t think I’ve ever seen a defensive lineman beat Marshal Yanda this badly, but Tuitt made it look easy, putting heat on Jackson right away. I’d like to see him take a better angle at Jackson, more so in a straight line, rather than slightly off to his left, giving him an escape lane.

Bush missed later on this play, for what that’s worth.

Edmunds does everything right here…except for finishing the play. That’s key.

I like the way he slides over and fills the lane, albeit off the line of scrimmage. He’s square to Ingram barreling down on him, but then slides off to the Ingram’s left right before the point of contact, ultimately resulting in an arm-tackle attempt, which isn’t going to cut it against a back as powerful as Ingram.

In the second half, Watt had his worst miss of the season. It’s not egregious, which is saying something.

I understand Watt isn’t squeezing down hard here to guard against the bootleg with Jackson, but he needs to cut that distance between himself and right tackle Orlando Brown Jr. in half.

By worrying about the bootleg from Jackson, it slides Watt out of position slightly, which gives Edwards a lane to cut back into. This is a tough one for me because it’s not a bad miss, but I have it down as a miss nonetheless. It’s a tackle we should expect Watt to make, especially at the line of scrimmage.

Then we get to Fitzpatrick’s miss.

Much like he did last week against Auden Tate, Fitzpatrick closes with force, arriving shortly after the ball for a jarring collision. Just like the Tate miss though, Fitzpatrick doesn’t wrap his arms, which allows Willie Snead IV to stay on his feet, shake off the Fitzpatrick hit and gain roughly 7 more yards.

Offensively, the Steelers forced just 2 missed tackles on the afternoon, meaning they lost the tackles battle with a season-worst mark of -8.

On the play in which he was concussed by Earl Thomas, Mason Rudolph avoided a sack by in the pocket by sliding up and to his left, slipping out to his left to find James Washington before taking that awful hit from Thomas as he released the football.

That was Rudolph’s best play of his career.

It looks great now, but it’s tough seeing this play and knowing that Marlon Humphrey won this battle in the biggest spot of the game, punching the football out of Smith-Schuster’s hands when it really counted.