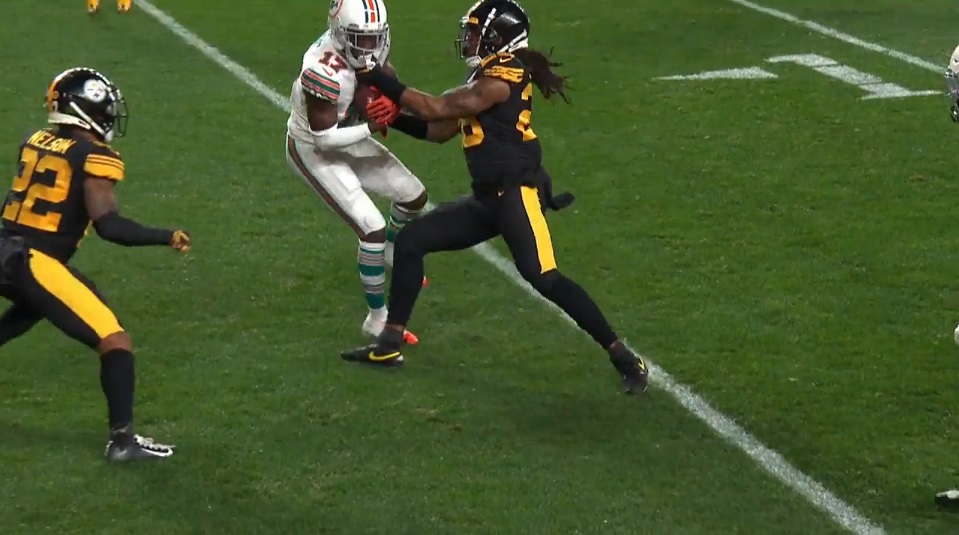 Things started out very rough Monday night for the Pittsburgh Steelers’ defense, leading to 14 first-quarter points by the Miami Dolphins at Heinz Field.

On the second drive of the game, the Steelers saw three defensive starters miss a tackle on one play, which led directly to a touchdown. Later in the first quarter, three special teams players missed a tackle on a punt return, meaning six total tackles were missed on just two plays. After the second quarter errors, the Steelers missed just two tackles the rest of the way, which played a huge role in the Steelers bouncing back from a 14-0 deficit to roll to a 27-14 win.

In total, Pittsburgh missed nine tackles in the win, but just five tackles came on defense, while the other four came on special teams.

The obvious glaring concern is the number of missed tackles on special teams by guys mainly on the roster for their special teams abilities.

I’m not going to fault Jordan Berry at all for missing a tackle, but it needed to be noted. There’s no way I want my punter beating some guys down the field on punt coverage and attempting a tackle, but I appreciate the effort.

Trey Edmunds, Artie Burns, and Johnny Holton need to be better in the tackling department. Edmunds made a great tackle on the opening kickoff and then missed a tackle in punt coverage. He was elevated mainly due to his special teams abilities.

Holton made the team mostly for his special teams prowess, but he’s missed two special teams tackles this year now. Sure, he’s been very good overall, but he has to tackle consistently.

Defensively, five total misses happen on three plays. While three misses on one play resulted in a touchdown, the consistently of the tackling was rather impressive on the night by the Steelers’ defense.

I don’t mind the completion allowed here to Allen Hurns, but what’s absolutely disastrous and unacceptable is the effort by Devin Bush, Mark Barron, and Steven Nelson after the catch.

Bush tries to punch the ball out while attempting the tackle, causing him to not wrap up properly. Then, Barron goes for the strip on the hit, rather than trying to wrap, while Nelson really wants no part of the contact and tries to punch and rip at the football.

All that allows Hurns to fight into the end zone for the Dolphins’ second touchdown of the game. Fans started to boo after this play, and rightfully so; it was disgraceful.

After that though, the trio cleaned it up. Barron was the only one to miss a tackle after that, and it was on Mark Walton on a short run.

Holton missed his tackle on a Preston Williams punt return in the fourth quarter, while Burns, Edmunds, and Berry missed on a punt in the second quarter.

I didn’t give Ola Adeniyi a miss here, simply because he’s not even close to Williams when he dives. He didn’t take the proper angle and pretty much took himself out of the play.

Edmunds misses right away though, allowing Williams to break across the field. Burns then misses, which then leads to Berry’s miss after he bounces off a block.

It was an ugly play overall.

James Conner picked up right where he left off in Los Angeles against the Chargers before the bye week. Conner looked explosive, ran through a number of tackle attempts, and provided the Steelers with a handful of explosive plays against the Dolphins while racking up 145 rushing yards in the game, the second-highest total in his career.

I love the way he sheds this tackler near the line of scrimmage with sheer lower body power. Sure, it’s an arm tackle attempt, but the Miami defender has a good grip on Conner. It doesn’t matter though, as Conner sheds it and rips off a first-down run.

Conner is playing some tremendous football lately. Hopefully he can heal up quickly and get back on the field because he’s rolling right now.