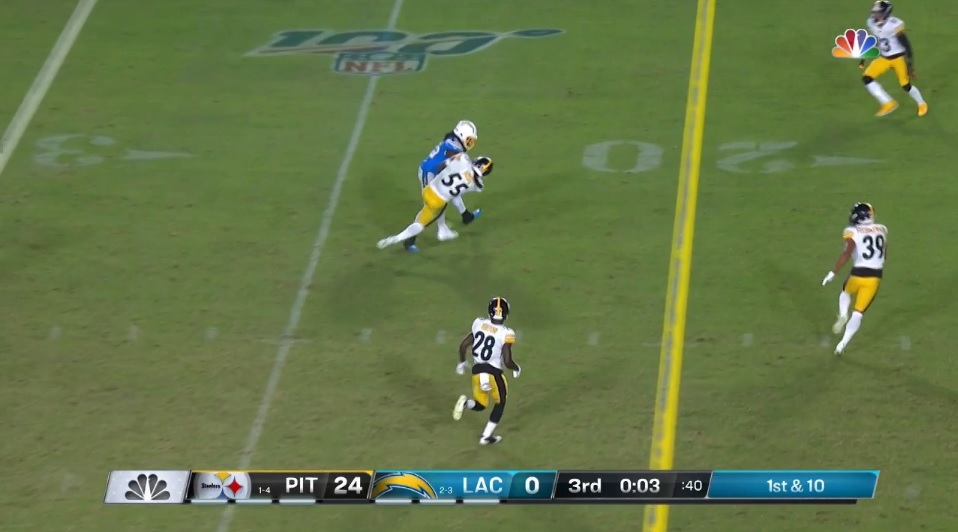 Despite a sloppy fourth quarter Sunday night in Carson City that saw the Los Angeles Chargers turn a blowout into a too-close-for-comfort affair, the Pittsburgh Steelers tackled pretty well, for the most part.

Rookie Devin Bush, the AFC Defensive Player of the Week, fell apart in the fourth quarter, missing all 3 of his tackles in the final 15 minutes. Spoiler alert: it wasn’t pretty.

Aside from that, a total of just 4 players missed tackles on Sunday. That’s a great performance by a defense that continues to get better and better each week.

Let’s start with the obvious: this was Bush’s worst performance in the tackling department in his rookie season. A lot of that has to do with the ankle injury he was dealing with late in the game. He rarely broke down for tackles and was a step slow at times. Here’s hoping he heals up quickly during the bye week.

Mike Hilton’s misses really didn’t come back to hurt the Steelers. He’s been playing great football in the slot. He missed a tackle on a run early in the game by Melvin
Gordon, and then later combined with Bush to miss a tackle on Mike Williams late in the fourth quarter. I’ll have more on that miss in a bit.

Justin Layne missed his tackle on the opening kickoff of the game. PFF had Layne as the special teams player of the week, and that’s just laughable. He was not good on special teams.

As for Kameron Kelly, well, he’s nice depth to have because he knows the defense now, but he shouldn’t be on the field in DIME.  Kelly has a tendency to dip his head, taking his eyes away from what he’s trying to strike.

Let’s take a look at the missed tackles.

Right away, Kelly jumped off the tape in a bad way.

I like the way he’s able to quickly read this dumpoff coming to Austin Ekeler, allowing him to get downhill in a hurry, but right before the point of contact Kelly drops his head, allowing Ekeler to slip out of the arm tackle.

Late in the third quarter, Bush records his first miss of the night.

Bush does a really good job of getting back into his drop after showing blitz. He’s able to read and get downhill in a hurry, arriving for the hit on Ekeler almost as soon as the Chargers’ running back turns around to get upfield.

Bush’s target is off slightly, leading to an arm tackle attempt, which Ekeler slips out of with ease. I’d like to see a little bit more power here from Bush.  I am wondering if he was worried about getting a flag here if he’d have gone for the big hit. Even so, this is a play he has to make.

Again, Bush struggled late in the third quarter against a running back out of the backfield.

I’m really not sure what Bush was doing here, but he’s trying to tackle Gordon’s stiff-arm, which is mind-boggling.

Gordon shrugs this off with ease. Fortunately for Bush, he’s able to recover and get in on the tackle.

Finally, the play I mentioned earlier with Hilton and Bush.

First off, check out the chip block by Williams on Bud Dupree. That’s how it’s taught!

After that though, this should be a simple checkdown that Bush stops for minimal gain. Instead, he’s a step slow getting to the perimeter, forcing him to try and arm tackle Williams. Once he misses, Hilton has to clean it up, but
Williams shakes him along the sideline, picking up an additional 4 years on an eventual touchdown drive.

There’s nothing super concerning here, but you’d like to see the defense, namely key defenders in Bush and Hilton, tackle better inside the final 20 minutes or so.

Against the Chargers, Conner nearly matched his season-total of 9 forced misses. Conner looked healthy and ran pissed off with the ball in his hands. That’s peak Conner we saw as a playmaker, and man was it fun.

It was hard to pick which play to highlight for Conner, but I went with this short catch in the second quarter.

Conner makes Jatavis Brown and Jaylen Watkins miss in a phone booth. This is the play when I knew Conner was in for a huge night with the football in his hands.

Benny Snell forced 2 misses on a night in which he ran the ball well. He forced Drue Tranquill to miss in the backfield, avoiding a tackle for loss, while Diontae Johnson forced a miss cutting back across the field on his little 7-yard touch pass in the backfield from Devlin Hodges.

As for Cameron Sutton, I had to give him a forced miss on his interception. He ran through an arm tackle from Williams.