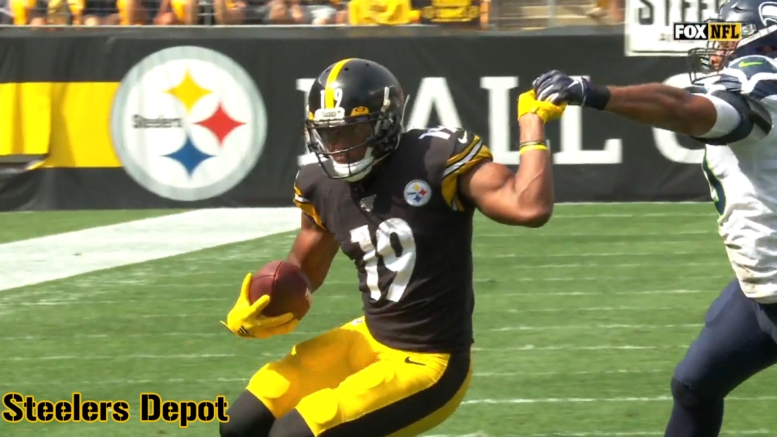 Well, at least Sunday won’t be the first time that JuJu Smith-Schuster ever caught a pass from Devlin Hodges. But the third-year Pittsburgh Steelers wide receiver admitted yesterday that it wasn’t far from it. With Hodges set to start against the Los Angeles Chargers, Smith-Schuster will be his top target, though the last pass they connected on ended in a crushing fumble.

Hodges was originally unsigned after the draft earlier this year, receiving an invitation to participate in the Steelers’ rookie minicamp. He did enough to earn a contract on the 90-man roster, replacing Brogan Roback, who is set to enter the XFL draft now.

He spent the offseason working as the number four quarterback, and that never changed, even though he saw significantly more opportunities—because he earned them—than the usual fourth quarterback does. That includes several dozen snaps in the preseason, a very valuable commodity.

But as the fourth quarterback, Hodges wasn’t working with the starters. After all, the Steelers were working with Mason Rudolph and Joshua Dobbs, who young quarterbacks, trying to develop them and to determine who the backup would be. They needed that work.

But as a consequence, the Steelers are now going into the sixth game of the season starting a quarterback who has barely worked with their top target before. Asked by a reporter if he had ever caught a pass from Hodges in an 11-on-11 setting before, he said, “actually, no. Honestly, no. First time”.

Hodges attempted and completed three passes to Smith-Schuster after replacing Rudolph on Sunday, totaling 38 yards, with two of the connections resulting in first downs and a quarterback rating of 118.8. Of course, that’s an incredibly small sample size.

“It takes time” to build chemistry, Smith-Schuster admitted. “Obviously, it’s not the same as the two years I had with Ben. It’s a process. I’ve been throwing with him last week, in the game, and now this week, constantly trying to build that chemistry. But it’s something that just doesn’t happen overnight”.

“One thing about Hodges”, he allowed, “is that he’s gonna let it go regardless. He trusts us, so if he puts it up—we trust in him that he’s gonna throw it up—so it’s up to us to make that play for him”.

I think many are excited and anxious to see what Hodges can do. He has been a fan favorite for a while now, some even believing that he was the second-best quarterback the Steelers had on the roster this offseason outside of Ben Roethlisberger.

He will get his opportunity to show it on Sunday, an opportunity that was always unlikely. But then, much about Hodges’ path to Pittsburgh has been unlikely.