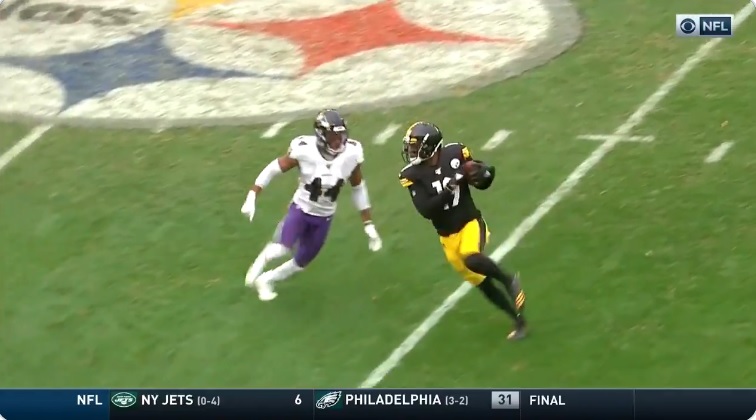 A new chapter of the Pittsburgh Steelers and Baltimore Ravens rivalry was born today as Lamar Jackson did battle with Mason Rudolph and Devlin Hodges. It was a game that went into overtime and the Steelers battled until the very end but a costly fumble by JuJu Smith-Schuster led to a Justin Tucker game winning field goal as the Ravens prevailed 26-23.

With the Steelers down 17-13 in the third quarter, Rudolph was knocked unconscious and out of the game after a helmet to helmet hit from Earl Thomas. Rudolph laid motionless on the field in what was one of the scariest hits delivered in a long while. Fortunately, Rudolph was able to walk off the field with help from teammates but this left the Steelers with their third string quarterback in Hodges.

In a timeline that no one saw coming, Hodges led the Steelers on two go ahead drives against the Ravens. The first was finished by a one-yard touchdown by James Conner while the second finished with a Chris Boswell field goal. Hodges finished 7/9 for 68 yards passing.

Despite just having over two minutes to go, Jackson would march down the field and put the Ravens in position for a game-tying field goal with 10-seconds to go though the drive was aided by a controversial roughing the passer penalty on Ola Adeniyi.

After a questionable decision to defer the overtime kickoff by Mike Tomlin paid off, the Steelers offense gave the football back to the Ravens in excellent field position after Smith-Schuster fumbled near midfield. A few plays later and Tucker knocked through a 46-yard field goal to send the Steelers to 1-4.

The Ravens would take control early as the Steelers offense once again struggled out of the gate. A punt from deep in their own end led to a short field and easy three points for the Ravens. The wildcat made its return on the second drive and while it bore great results last week, it was nothing short of a disaster this week as Jaylen Samuels saw his pass intercepted by Josh Bynes.

Bynes’ interception gave the Ravens another short field to work with as they took over at the Steelers’ 15-yard line. It took only four plays for Mark Ingram to plunge in and give the Ravens a 10-0 lead.

After keeping a leash on Rudolph’s pass attempts over the last two weeks, the quarterback finally got a chance to show off his arm as the Steelers attempted to answer back from a 10-0 deficit. Rudolph first found his old college teammate James Washington for a 21-yard reception before hitting JuJu Smith-Schuster on a crossing route a few players later. Smith-Schuster would do all the rest after the reception, stiff arming Marlon Humphrey and taking the pass 35-yards into the endzone.

That would be Rudolph’s lone touchdown of the afternoon as he would finish 13/20 for 131 yards while Smith-Schuster would add seven receptions for 75 yards and a touchdown.

The Ravens would answer back with a familiar foe as Antonio Brown’s cousin Marquise Brown would catch a 11-yard touchdown pass from Jackson to give the Ravens a 17-7 lead. Brown’s touchdown capped off a 13-play drive in which the Ravens converted three third down attempts. The defense’s inability to get off the field early was certainly a factor early but they would find a way to make it up shortly after.

The Steelers’ defense would make Jackson’s day a nightmare from there on out, starting by recording three sacks and two interceptions in the first half as Kameron Kelly and Mike Hilton would grab their first interceptions of the season. Both turnovers would result in field goals as the Steelers narrowed the Ravens’ lead to 17-13 at halftime.

The defense would pick right back off where it started in the second half as rookie linebacker Devin Bush made an incredible interception to save perhaps three points or even more. Unlike the other drives, the Steelers were able to convert this turnover into seven points.

Jackson would finish the game with just one touchdown pass and three interceptions and was sacked five times but despite the Steelers’ defense rounding into form, it was not enough to boost an offense led by a third string quarterback.

The Steelers will travel to Los Angeles next week to take on the Chargers on Sunday Night Football. The availability of Rudolph for that contest remains questionable as the Steelers sink to 1-4.