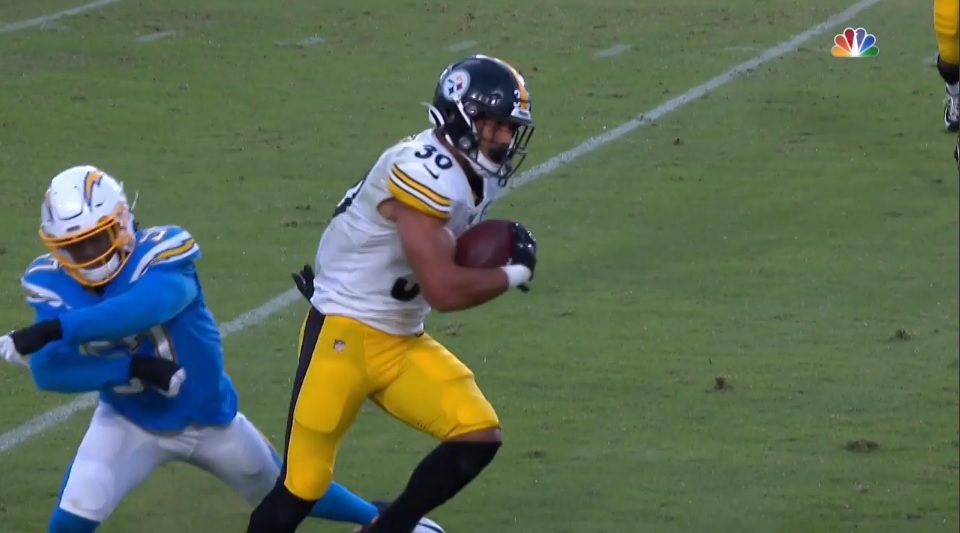 Working on their 4th string quarterback, Mike Tomlin summed up the need to run the ball effectively versus the Los Angeles Chargers.

“We didn’t have any other options,” he would tell reporters after the game.

They didn’t have many options. But they had James Conner. And he broke tackle after tackle en route to the victory. Easily  his best game of the 2019 season and it couldn’t have come in a bigger moment.

This will be more of a highlight reel than it is an in-depth breakdown. Nick Farabaugh is examining the run scheme that helped create big running lanes for him and Benny Snell. This will show Conner’s best traits. His strength, his power, and his contact balance to fight for yards and move the sticks.

His first notable play came on a crucial third down pickup that eventually gave the Steelers a commanding 14-0 first quarter lead. Conner runs through the first arm tackle, shields himself from the next defender, and keeps pumping his feet to just barely get to the sticks.

You can debate if Conner truly made it to the marker or not. But his effort and leg drive is what made it even that close. If he doesn’t do that, the Steelers likely settle for a measly field goal off the turnover, a story we’ve seen written too often before this year. Getting seven was huge.

The next one wasn’t nearly as impactful but a great example of Conner turning an ugly play into a good-enough one. Uchenna Nwosu rightfully ignores Devlin Hodges on the read/option and squeezes Conner downhill. But he’s able to cut it back, make him miss, and turn a short loss into a gain of three, allowing Pittsburgh to stay well-enough on schedule.

Check out Nwosu’s reaction after the play. That just about sums the night up. 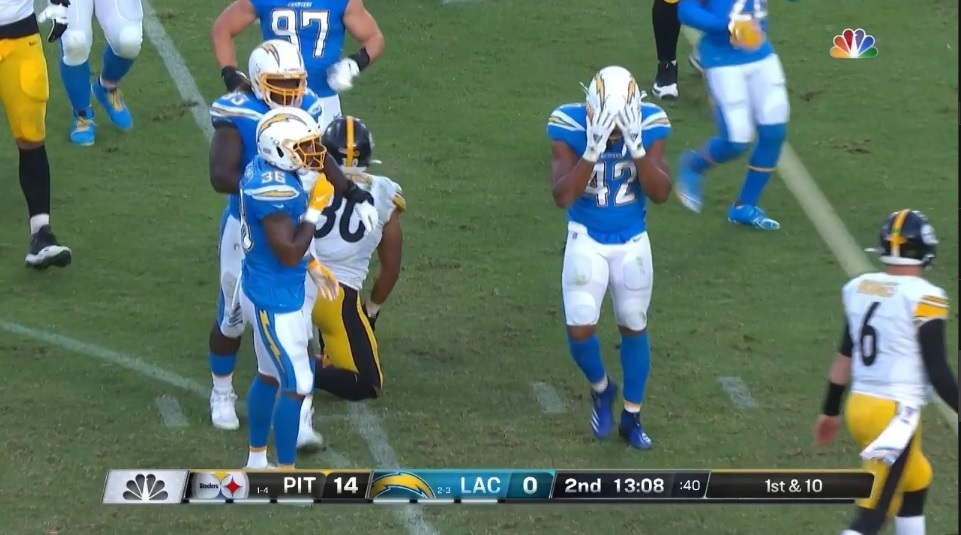 Another third down conversion. Checkdown from Hodges and Conner breaks three tackles to basically throw himself over the sticks. Power and balance to stay on his feet is pretty special and obviously important traits for any good running back to have.

And finally, his 26 yard touchdown. One one one with a DB is a matchup the back’s gotta win. #27 aims too high, Conner brushes him off, and he races down the right sideline for the walk-in touchdown.

There’s no doubt the first month had been tough for Conner. Falling behind in games, an offensive line that didn’t create a push, defenses who stacked the box, and that ugly fumble at the end of the 49ers’ loss. But anyone who’s watched him over the last 18 months knew not to lose faith. He’s a complete back who can run, catch, and block.

As Tomlin described during the week, this was a “pissed off” Steelers’ team. Conner embodied that. The Chargers wanted no part in tackling in him which was good because they simply couldn’t bring him down Sunday night.