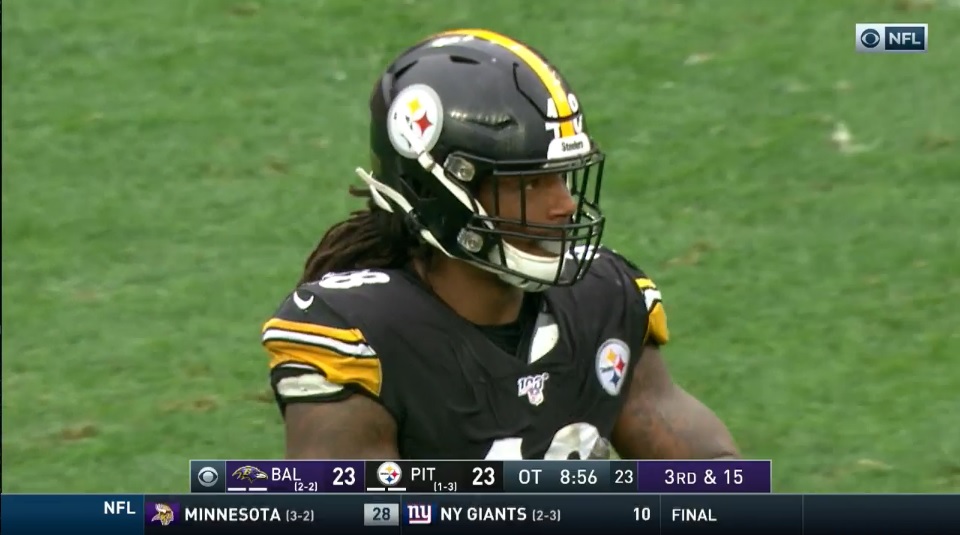 Allow me to clear my throat before I say this but Pittsburgh Steelers outside linebacker Bud Dupree is having a pretty good season even if his stats would make you believe otherwise. Dupree currently has three quarterback sacks, five quarterback hits and five tackles for a loss but he is on pace for eight sacks, 13 quarterback hits and 13 tackles for a loss, all career highs but hardly numbers that are going to blow anyone away. The details can be deceiving though and a lot of Dupree’s good play has been lost in the details and that was fully on display last Sunday night against the Los Angeles Chargers.

Dupree finished that game with two tackles, one tackle for a loss, zero quarterback hits and zero sacks. It was the first game this season that Dupree failed to register a quarterback hit but that does not mean that he did not come close to Chargers’ quarterback Philip Rivers. Quite the opposite as Dupree created a few pass rushing opportunities for others while displaying a few nifty pass rushing moves, all aspects of the game that get lost in the details.

The Steelers’ outside linebacker does not get credited with a sack, quarterback hit or even a pressure on the play above but he very much orchestrates the team’s pass rush. A perfectly executed stunt, Dupree is able to occupy both tackle Trent Scott and guard Forrest Lamp to give Cameron Heyward a free lane to rush Rivers. The pass is completed but for a marginal gain and that is all due to Dupree’s efforts, though he will not be credited with a single thing.

The Chargers’ offensive line had their hands full all night trying to contain Dupree and here is another of many plays that will get lost in the details. Dupree beats Scott inside and has a clear shot at Rivers but Lamp has other ideas. In order to save his quarterback, he holds the Steelers’ linebacker, taking a sack off the board in return for a 10-yard holding penalty.

Now it is time to get into the fun stuff and look at the variety of moves that Dupree utilized on Sunday night. This is one area of his game that has progressed greatly over his five-year career. The Steelers’ linebacker is no longer just a speed guy who will run around the edge and hopefully tackle a quarterback who has been scrambling for over five seconds. Dupree has some serious moves in his arsenal now.

Exhibit A – Dupree takes the Chargers’ left tackle for a ride backwards into his own quarterback. Treating Scott like a sled at training camp, the five-year veteran pass rusher shows off some impressive strength as he collapses the pocket and Rivers is forced to check it down.

Exhibit B – Perhaps the most exciting non sack of Dupree’s career on the play above. He long arms Scott, creating the leverage and separation he needs as he sets him up for a very nice spin move in order to get inside. Dupree does not get a sack or a quarterback hit on the play above but he was a thorn in Scott’s side all night long, so much so that the Chargers actually opted to chip him on more than one occasion.

Dupree is putting together his best season yet and while his numbers do reflect that to a certain degree, a lot of his work is getting lost in the details. Sunday’s game against the Chargers was a prime example of this as the Steelers linebacker put together a great game and was not credited for much of it. This also does not include the two backside run stops he was credited with as well.

While Dupree may never be one the league’s most premier pass rushers, he will always be a very well rounded one as he is capable of getting after the quarterback, stopping the run and dropping into coverage. And there is nothing wrong with that.