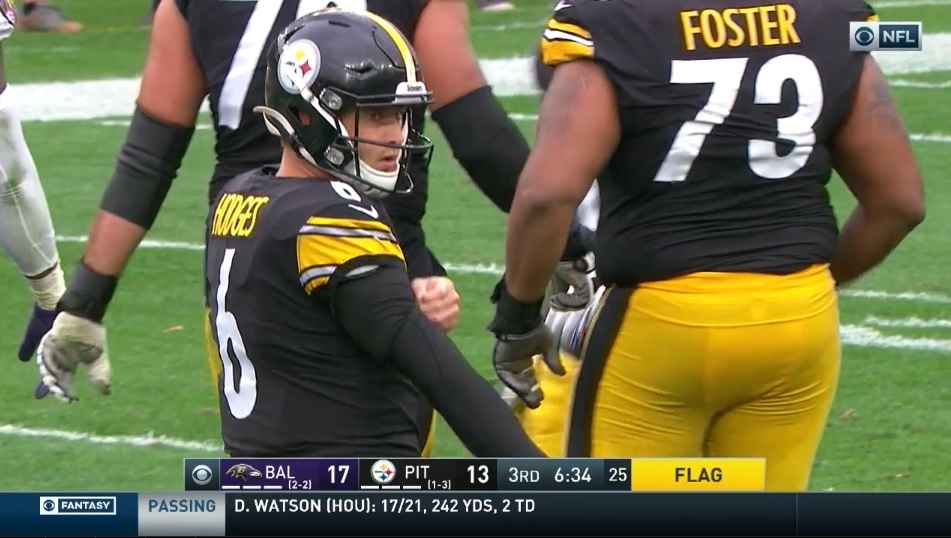 Though Mike Tomlin didn’t offer a timetable for Mason Rudolph’s return, it’s likely Devlin Hodges will make his first NFL start this Sunday. Though starting a third string, rookie UDFA was never part of the Pittsburgh Steelers’ plans, Hodges has impressed everyone. Including his head coach.

“No different than my impressions of him throughout this process,” Tomlin told reporters Tuesday when asked about Hodges’ performance. “Most of which I’ve expressed to you guys. He has an awareness and savvy and moxie about him that’s beyond his experience. It was evident in Latrobe, he carried it into preseason stadiums, and now he’s given us a little insight that he’s capable of carrying it into regular season stadiums. So it’s all positive.”

We outlined Hodges’ NFL journey in an article yesterday where David DeCastro praised the job he did. Hodges had a prolific career at Samford, breaking Steve McNair’s record for passing yards, and nearly upsetting Florida State as a senior. Undrafted, he made it into Steelers’ rookie minicamp on a tryout basis, earned a contract, and turned heads throughout the summer. Pittsburgh brought him back to the practice squad after trading Josh Dobbs and then elevated him to the 53 once Ben Roethlisberger was lost for the season.

Sunday, he went 7/9 for 68 yards in relief of Rudolph. Tomlin cited an obvious lack of experience but circled back to Hodges’ consistency and even-keeled nature as uncommon traits for a player at his position.

“Obviously, he lacks a lot of experience and the things that go with experience. But I like his demeanor, I like his Steady Eddie attitude and approach to it. I think it’s an asset to him and to us in our present circumstance.”

“Fearlessness is good. Particularly at that position.”

Hopefully Hodges’ play this Sunday is as good as Tomlin’s talked him up. Since 2008, only two rookie UDFA quarterbacks have won a game on the road. The Carolina Panthers’ Kyle Allen, who beat the Saints last season, and former Oakland Raiders’ QB Matt McGloin, who did so in 2013.