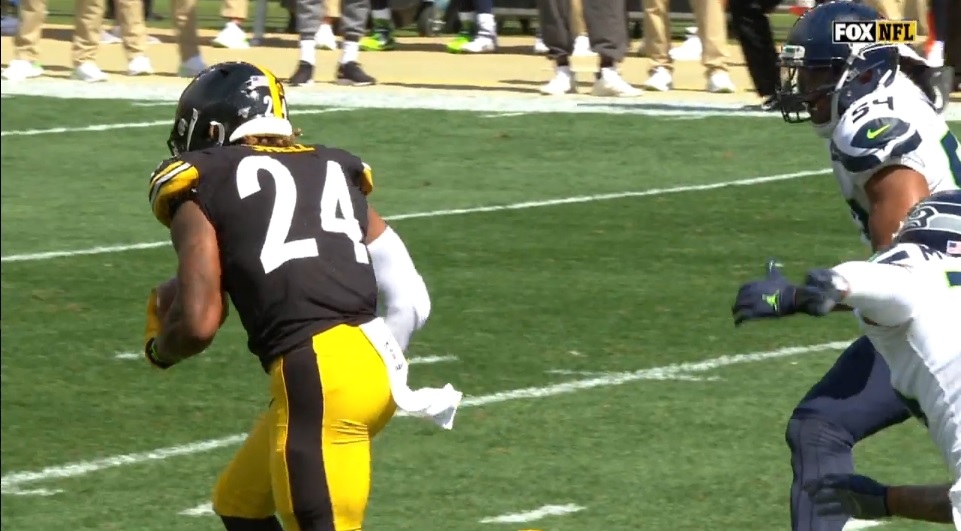 Get ready for Benny Snell football.

Snell will be James Conner’s backup for roughly the next month while Jaylen Samuels sits out after undergoing a knee scope. And that means an expanded role for Snell, who as Mike Tomlin indicated, is excited to see regular playing time.

“I believe that he is,” Tomlin said when asked if Snell is ready for more snaps. “I know that he’s chomping at the bit to be a contributor. He’s a high-energy young guy. He’s been highly productive on special teams and usually production on special teams is an indication of offensive and defensive readiness. This guy is making tackles on coverage units and stuff. It’s been really impressive.”

Through five weeks, Snell has six carries for 30 yards. His best run came on his very first, a 23 yard burst up the middle on 3rd and 1 against the Seattle Seahawks. He’s played just 11 offensive snaps all season but with Samuels’ injury, he could surpass that total Sunday night versus the Los Angeles Chargers.

As Tomlin noted, he’s played a ton on special teams. After being somewhat limited in the opener against New England, he’s logged at least 16 ST snaps each week since. The injury to Roosevelt Nix has opened the door for more reps on the kick return and kick coverage team. Snell is also the right wing on the punt coverage unit.

The NFL’s game log has him credited for a pair of tackles this season – one on a punt, one on a kickoff. He’s done well to embrace that side of football after being the big man on campus at Kentucky, helping to turn the program from lovable loser into a bowl game winner.

Now, he has the chance to show up on offense too.

“Obviously, we drafted him to play running back,” Tomlin said. “Hell probably get an opportunity to get more exposure there because of the injury to Jaylen and I’m sure he’s excited about it.”

While Snell still will likely lose weight this offseason in order to become more explosive, just as Samuels did this summer, he’s done well to show his power and leg drive to move the pile forward. Getting him downhill is his strength which will be a departure from how the team used Samuels, letting him work the perimeter more often, and will make him a thunder and thunder compliment with Conner.

Though Snell showed reliable hands in the preseason, he isn’t the receiving threat Samuels is either and will limit the offense – now working on its 3rd quarterback of the season – all the more.