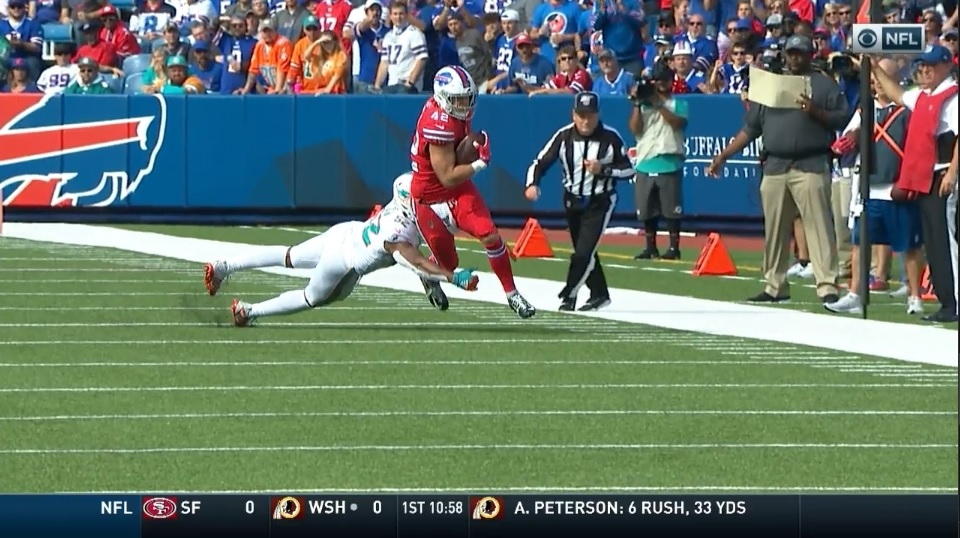 Buffalo has QB Josh Allen (17) under center with FB Patrick DiMarco (42) offset to the strong side of the formation with Frank Gore (20) as the RB. Tyler Kroft (81) is the TE lined up inline to the left with John Brown (15) in a tight split left and Duke Williams (82) split to the right.

Miami is in Cover 1 with Man coverage underneath and a single high safety over the top.  The key defenders on this play are DB Eric Rowe (21) and LB Raekwon McMillan (52).

At the snap, the Bills are going work to get two legal picks on one player, McMillan.  Kroft, being covered by Rowe, is going to release straight up field and drives Rowe back just a yard but it’s a useful yard.  Outside, Brown is going to release to the inside of his defender cutting just in front of the linebacker and is going to run a Corner route. These two routes are going to slow down McMillan enough to let his man, DiMarco, get wide open in the flat. After the catch DiMarco is able to make McMillan miss and has an open field. He’s able to take a pass he caught at the line of scrimmage and make it a 27 yard gain.

Steelers Scenario – FB Rosie Nix has been out of commission for most of the year but he is practicing this week.  Wouldn’t it be nice to welcome him back with a play like this? I wouldn’t want to be the DB in the open field trying to make that tackle. If he isn’t the option I can see Nick Vannett filling this role. It’s all about the pick/rub routes to slow down the linebacker.

Again Allen is under center with Devin Singletary (26) the lone RB. Dawson Knox (88) is on the right with Williams in a tight split to his right. To the left they have Cole Beasley (10) in the slot and Brown wide left.

Miami is going to bring pressure sending the linebacker Jerome Baker (55) and slot corner to attack the left side of the offense but Buffalo handles it well including a nice pickup by Singletary on the left side.

Brown and Beasley are going to run double posts clearing out the DB and safety.  DB Ken Webster (31) is shaded to the outside of Williams who is going to run a drive route across the field. Nothing fancy on his release he just uses quickness to the inside. Webster gets a small jam on him but not enough to be effective. Allen makes a nice throw that Williams tracks over his shoulder for a 23 yard gain.

Steelers Scenario – This could probably be run with several Steelers receivers but to me this one has JuJu Smith-Schuster written all over it and that’s probably because his two touchdowns this year have come on similar routes.  I put James Washington (if he can play, Johnny Holton if he can’t) and Diontae Johnson on the left to run the double post routes and run JuJu underneath that. After the two post routes clear out space this boils down to winning the one on one match up.

Buffalo comes out with heavy personnel using three TE’s all to the right side.  A reserve lineman is lined up as TE1, Kroft is to his right and will stay in and block with rookie Knox as the last man on the line. Brown is the lone WR lined up wide left.

Miami is their base defense and is playing a Cover 1 defense with the single high safety and Man coverage underneath.

It’s a 3 man pattern with the Bills keeping seven men in to block. Allen will run a play action fake to hold the linebackers. Knox will run a deep curl at about 15 yards but he’s well covered by Webster. Brown is one on one with rookie Nick Needham (40) and will release to the inside and run a deep In route.  Browns speed is too much for Needham and he opens up space quickly. The throw is slightly behind limiting the yards after catch but it’s still good for a 24 yard gain.

Steelers Scenario – Steelers can run their heavy personnel with Zach Banner, Vance McDonald and Vannett in the TE roles. When the Steelers have gone to sets with one wide receiver it has often been Washington so that’s my guess here but again they could use several WR’s here.  The two keys are to sell the fake to get the linebackers to read run and move forward and the WR has to sell the deep route to keep the safety from jumping the crossing route.