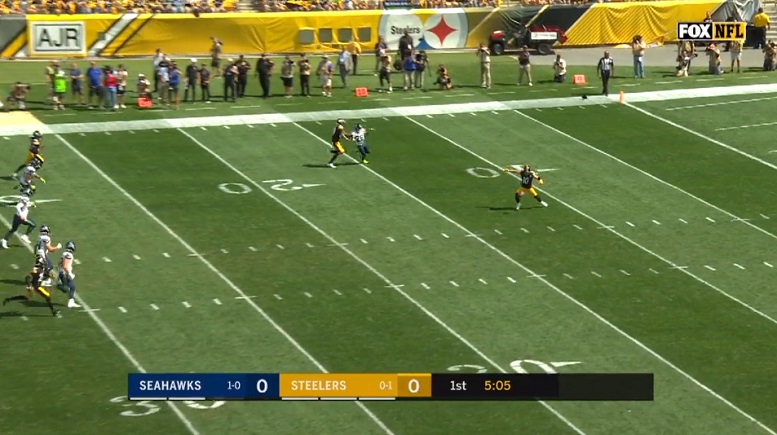 A lot went wrong in the Pittsburgh Steelers 28-26 Week 2 home loss to the Seattle Seahawks and with the team now winless entering Week 3 of the 2019 regular season, there are likely to be a few lineup changes and possibly even a roster of move or two in the coming week. While inures suffered Sunday might be at the root of one lineup change or roster move or two, others might another one or two might be a result of poor play. In fact, we saw one minor move made during Sunday’s game that might just become permanent.

After muffing a first quarter punt  and then returning it for all of one yard, wide receiver Ryan Switzer was replaced on punt returning duties by rookie wide receiver Diontae Johnson. While Jonson received two punt return opportunities he remainder of the game, he only was able to return one as one other went out of bounds. Johnson’s lone punt return was good for 11 yards, by the way.

Johnson, in case you forget, returned both punts and kickoffs during his college career at Toledo.

Should Johnson indeed take over all return next weekend, Switzer’s roster spot becomes even harder to justify. While Switzer has caught seven passes so far through the team’s first two games, they’ve amounted to all of 29 yards. His lone catch on Sunday against the Seahawks went for no gain.

Switzer’s career average depth of target and yards after the catch stats aren’t great at all and with 49 career receptions now on tape, that’s enough to start drawing some conclusions from. Additionally, Switzers 8.5 career punt return average and 22.3 yard kickoff return average are both average at best.

The Steelers need more production out of their wide receivers not named JuJu Smith-Schuster moving forward and that consistent production won’t be coming from Switzer any time in the near future. If he’s no longer going to be the Steelers returner moving forward, the team should consider parting ways with him and possibly re-sign former wide receiver Eli Rogers to take his place on the roster.