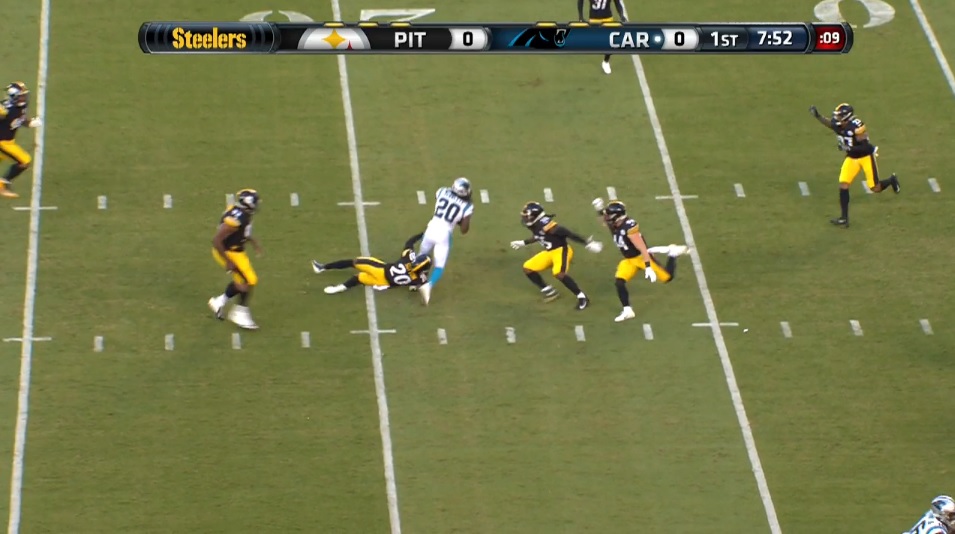 Thursday’s preseason finale against the Carolina Panthers was the final showing for members of the Pittsburgh Steelers trying to make the roster.

Unfortunately for some of those players, Thursday’s showing was a rough one, which led to a number of roster cuts down to the final 53-man roster.

Due to the general sloppiness of the game, the missed tackles report is an ugly one for the Black and Gold.

Let’s jump right into it so that we can all move on to the New England Patriots.

Against the Panthers, Cameron Sutton stands out in the missed tackles department with two early ones. It wasn’t egregious by any means, but he needs to clean up the tackling issues heading into Week 1 against the Patriots.

Here in open space against Panthers running back Jordan Scarlett, Sutton doesn’t quite finish the play.

Following the short dump off to Scarlett from Kyle Allen, Sutton is in great position to wrestle the powerful back to the ground. However, he doesn’t have the needed play strength to finish off the tackle. That said, Sutton slowed down Scarlett well enough to let help arrive. If you can’t finish off the play yourself, hold on long enough for friends to arrive.

Earlier in the game, Tuzar Skipper cracked the missed tackles report after an incredible camp and preseason. Skipper, much like Ola Adeniyi earlier in the preseason, missed his tackle on a sack attempt, this time missing Allen around the ankles after dipping under and around the Panthers’ left tackle.

Skipper’s missed sack led to Allen rushing for 13 yards and a first down to the drive that ended in points.

Late in the game, fellow standout rookie linebacker Ulysses Gilbert III cracked the missed tackles report as well, this time against Scarlett on a running play.

Rookie Sutton Smith did a nice job of setting the edge to force Scarlett back inside to help, but Gilbert comes in a bit high, allowing Scarlett to shoot out a stiff arm to ward off the Akron rookie.

Much like Sutton’s missed tackle on Scarlett earlier in the game, Gilbert III does just enough to slow down Scarlett, allowing rookie PJ Locke to fly in like a missile to send Scarlett to the turf.

Offensively, Pittsburgh really struggled to create much of anything in the forced missed tackles department. While Devlin Hodges seemingly ran for his life all night long, he didn’t force a single miss.

Diontae Johnson forced his one missed tackle of the preseason on a punt return against the Panthers, forcing the first guy to miss on a short return. Joshua Dobbs did his usual thing against the Panthers, stepping out of a tackle attempt of a would-be sack to scramble for short yards, turning a negative into a positive.

Many seem to be down on Benny Snell right now, and rightfully so: his preseason tape as a runner was mostly dreadful. However, he showed great hands all preseason and had a little wiggle out of the backfield.

On a short out route here, Snell catches the ball cleanly from Mason Rudolph and then quickly shrugs off a tackle attempt in the open field, showing off great balance. He’ll definitely need to shed some weight to try and get more explosive after this season, but he can contribute right away this year as a pass protector and receiver out of the backfield.

Eli Rogers, who unfortunately saw his time with the Steelers come to an end, forced a missed tackle as well, shrugging off a defensive back on a short stop route before picking up the first down.

It was a quiet exit for Rogers, who was mostly non-existent all preseason. At least he put together a decent clip against the Panthers.