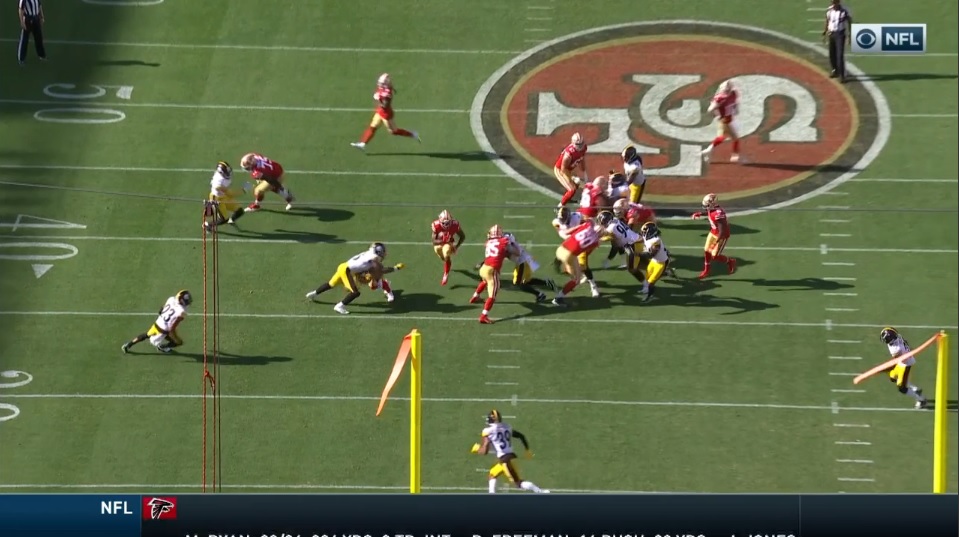 Even in recent years when the Pittsburgh Steelers’ defense was a far cry from being the elite version it was from 2000 to 2010, their run defense had remained stout.

Over the last two weeks, that area has looked anything but.

It was no secret what the Seattle Seahawks and San Francisco 49ers needed to do to win the game. Run the ball. The identity of each offense and the Steelers knew it.

Seattle and San Fran controlled the line of scrimmage with the run game. The Seahawks’ top two running backs, Chris Carson and Rashaad Penny, combined for 25 carries and 122 yards, an average of 4.9 yards per carry. They gashed the Steelers’ front with big plays, led by Penny’s 37 yard touchdown on 3rd and 2. Anthony Chickillo’s missed tackle was bad enough; the inability to get Penny on the ground after that made it all the worse.

San Fran had similar success in slightly different fashion. Their top two runners, Matt Breida and Raheem Mostert, carried the ball 26 times for 147 yards, an even better average of 5.7 per carry. But unlike in Week 2, they consistently churned out successful runs without needing the game-breaking play. Mostert’s long was just 19 yards, Breida only ten, but they rarely had a negative play.

All told? The past two weeks, the opposition’ primary backs have carried the ball 51 times for 269 yards and a touchdown. That’s 5.3 yards per carry. They’ve given up another two rushing scores to the 49ers’ Jeff Wilson, who functioned as their short yardage back and dove in twice yesterday.

That’s not Steelers’ football. In any era. It wears a defense down that’s already on the field more than it needs to be, keeps the opposing offense on script, and puts them in manageable, short-yard situations. Stopping the run won’t get any easier as Pittsburgh begins AFC North football, especially when they take on Baltimore in took weeks, or when the weather turns cold and running the ball – and stopping it – become even more important.