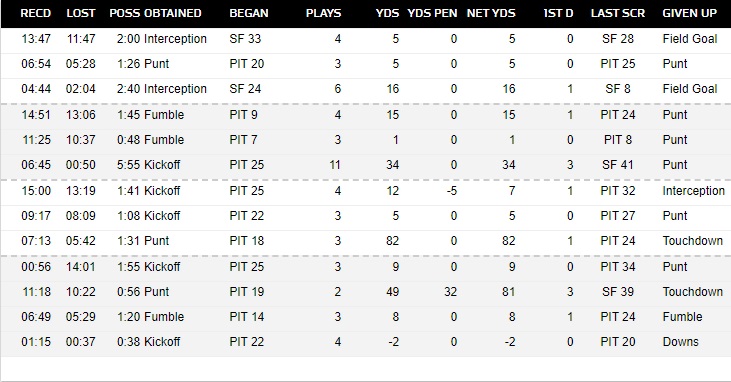 The Pittsburgh Steelers defense did almost everything they could to help first year quarterback Mason Rudolph win his first career start. If there was a recipe book for victory, the defense must have surely gotten their hands on it and studied it well before Sunday’s contest. The defense recorded five takeaways, with two interceptions and three fumble recoveries but yet with just over five minutes to go, the San Francisco 49ers were in prime position to take the lead.

How is that possible?

When taking a look at the actual numbers, it’s easy to pin this one on the defense. Over 400 total yards allowed, 168 yards rushing allowed and the 49ers converted over 50-percent of their third downs. So, case closed right? Not quite.

As you would expect, the Steelers have not won the time of possession battle yet this season, meaning that their defense has been out on the field more than their offense. That has never been part of a winning strategy, especially in today’s NFL where offenses are more high powered than they have ever been.

Here are the Steelers’ time of possession numbers this season:

Not only have the Steelers failed to exceed over 28 minutes in time of possession this season, they have especially struggled in this department since Ben Roethlisberger went down. The Steelers are not going to win many games when their defense is on the field for almost 40 minutes, like they were in San Francisco.

Since 1983, the Steelers are just 6-34 when their time of possession is 24 minutes or less. That’s a winning percentage of .150, which may be where the Steelers are headed unless their offense becomes more sustainable.

Less time of possession also means more plays being run on the defense which translates into more opportunities for the opposing offense to score and more opportunities for the defense to break. Football is a game of percentages and when you give an opposing offense 70 plays or more, which the Steelers have in back to back weeks, eventually the offense is going to find a way into the endzone, unless you are running the Steel Curtain out there, which the Steelers are most certainly not.

The Steelers are 71-70-2 when on the field for 70 plays or more throughout their team’s history. Just like the time of possession figures, what the Steelers’ offense is doing right now is simply not sustainable or a recipe for success, especially with a quarterback getting his first taste of the big leagues.

Cameron Heyward told ESPN’s Brooke Pryor yesterday that “Good defenses get the hell off the field. We didn’t in the second half.”

Here’s a counterpoint – good offenses keep their defenses the hell off the field. The Steelers have not consistently done that yet this season.