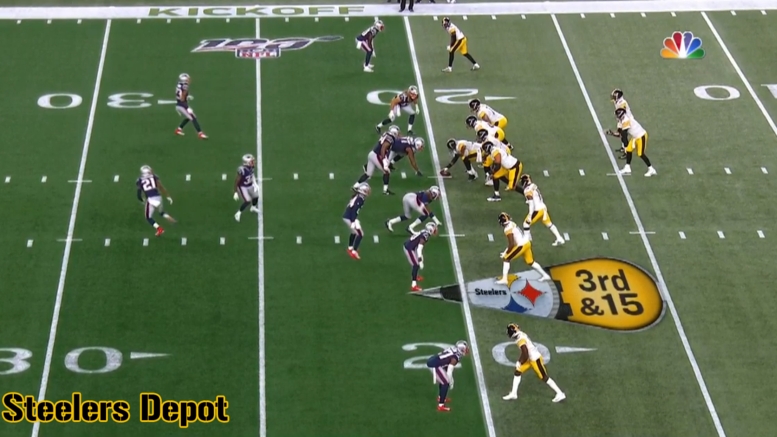 As was the case last season, the Pittsburgh Steelers showed that they are an offense that understands the concentration of their talent lies at the wide receiver position—even in the absence of Antonio Brown—and that they are not afraid to utilize that talent to the full extent of their capabilities.

The Steelers already ran out of four- and five-wide receiver packages more than anybody last season, and the season opener against the New England Patriots was no different. Out of a total of 69 offensive plays run—including no-plays—they lined up with four or more receivers on the field on 19 occasions. 15 of those were with five receivers on the field.

But I want to talk about the other four occasions, because that is where we see them differ from last season.

A year ago, Randy Fichtner began employing the four-receiver sets early on, and he later acknowledged this offseason that part of the purpose of that was to give James Conner, in his first year in a starting role, with no experienced or valued backup following Le’Veon Bell’s no-show, a breather.

In other words, when they went to the four-receiver set, they did it out of an 01 personnel package. That is, four receivers, one tight end. This year, they’re not doing that. At least not as much. It’s the running back staying on the field, the tight end coming off: the 10 personnel package.

While this is a small sample size of just four plays, I expect this to continue to be the preferred look out of this grouping, because retaining a running back on the field makes your play options much more versatile. Not having a running back on the field essentially eliminates any traditional running options, though the team has even run out of five-receiver sets with Ryan Switzer. Three of the four plays were run with the 10 grouping over the 01.

Of the three plays they ran from the 10 grouping last Sunday, one was a false start, but the other two were all completed passes. The first was a completed pass to Diontae Johnson for nine yards, but this came on a third and 20 following an offensive holding call and, if I recall correctly, at least one drop.

The one time that they used the 01 look was on the opening drive of the third quarter, Ben Roethlisberger finding James Washington for 45 yards down the right sideline.

Speaking of Samuels, perhaps it’s worth noting that he was the running back on the field for three of these four plays. From the 01 grouping, Vance McDonald lineup up in the backfield. The personnel for the 10 look consisted of Johnny Holton on the field for these snaps along with Johnson in addition to the two starters. Switzer and Washington were together with the starters for the 10 snaps.

The common denominator separating the bulk of them from the four-receiver set from a year ago, however, has been the presence of a running back. The question is whether or not the five-receiver set will be the more prominent look, as it was Sunday, or if that will be opponent- and situationally-dictated.