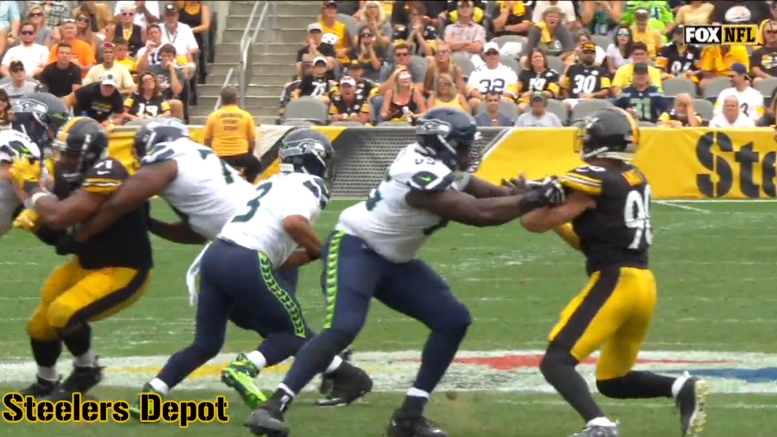 The Pittsburgh Steelers were ready and raring to go for a fantastic bounceback performance. At least that’s how it looked in the first half. They held the Seattle Seahawks to just seven points, and the pass rush was getting home early and often.

They had four sacks by the time the first half was over, far more than they had in the opener. Stephon Tuitt was the lynchpin of that effort, responsible for two and a half sacks on his own, with T.J. Watt the other possessor of a full sack. Mark Barron split one with the sixth-year defensive end.

Things were going well. And then they got tired. Or at least that’s the story Seahawks left tackle Duane Brown is telling, according to Chris Adamski of the Pittsburgh Tribune-Review. “You could feel them kind of start to get tired and wear down, and that helped us out in the second half”, he told the reporter.

That’s not what you want to hear, obviously. We’ll have to take a closer look, and also see what kind of rotations they were using, but it’s possible that they were getting more players in and out of the game in the first half.

Especially in the fourth quarter, though the Seahawks did have some longer drives, including two out of three possessions in that final frame that spanned four minutes or more. They kept the ball for the final 5:34 minutes of the game, which prevented the Steelers’ offense from ever having a chance to take the lead.

Four of their final five drives spanned at least 40 yards, and three of them—including the 40-yard drive—concluded in the end zone, while the other one ended with three kneeldowns to put the game to bed.

“We just took over”, Brown said, noting that quarterback Russell Wilson was really working the short passing game, and that was burning the pass-rushers’ fuel. If it’s true that the Steelers really got as winded as Brown and Seattle are indicating, then that is a concern about endurance, and perhaps about depth as well.

That depth took a blow yesterday as well with the injury to Anthony Chickillo. If he misses time, that means Olasunkanmi Adeniyi is going to play, and obviously we’re going to quickly find out how good he is. Jayrone Elliott, who was a healthy scratch, will certainly dress as well, and possibly play.