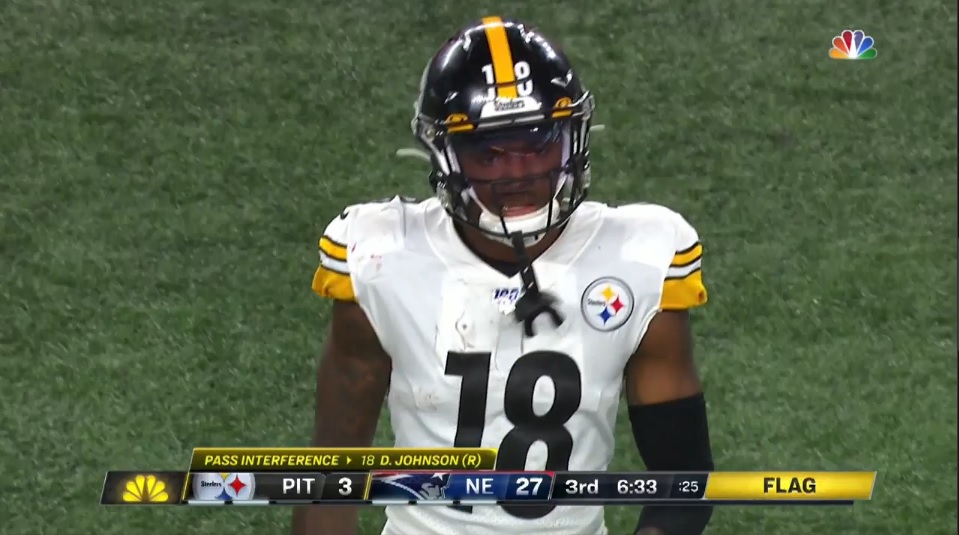 Devin Bush/ILB – Like the majority of the team this week Devin Bush did not play well.  I felt you could see some nerves early in the game. He looked a bit hesitant on his reads but that got a little better as the game went on. He had 11 total tackles but there weren’t many near the line of scrimmage.

Against the run, and this was something we knew going in, but he was ineffective getting off one on one block with offensive lineman. New England often had a lineman come out to him and I don’t think there was a play where he was able to disengage and make a tackle going forward or near the LOS.  If you can keep him clean and let him attack, he’ll make a lot of plays but disengaging from bigger stronger players will be an issue all year.

Against the pass, he had a better day. There were at least 3 plays were he came up on play action and the pass was completed in the area behind him and he bit on a few others as well. He wasn’t alone. The defense as a whole was biting on the play action all game.  He did well versus Rex Burkhead in the slot and out of the backfield. Covering a wheel in the first half and on two way go routes and was also solid covering the tight end. When Burkhead was split out wide he struggled while chasing crossing routes. He got rubbed on one play where they could have called offensive pass interference and then they came back on the next play with a similar route and it did get called. He was asked to cover a savvy veteran and will learn from this experience.

This looks like a run blitz and he takes on the pulling lineman in the hole but he uses the wrong shoulder. You want to use the inside shoulder and keep the outside free and force the runner inside. Just another thing he can improve upon.

Diontae Johnson/WR – He had the best day out of the rookies. Johnson finished with 3 catches for 25 yards and showed some of the positives we saw in the preseason. He was used mostly in 4 and 5 receiver sets in the slot and outside often lined up on the same side as Ryan Switzer.

His first catch was a short cross that he got his head around a tad late but was able to make a one handed catch. He made a nice adjustment on a WR screen, made one guy miss and used a block to get eight yards. He too looked more comfortable as the game when on and probably earned a few more plays going forward.

It wasn’t all positives. He did have a drop on a short in route early in the fourth quarter and was called for offensive pass interference on crossing routes with JuJu Smith-Schuster.

Here was pretty route that went incomplete. He’s split wide left to the top of the screen. He’s going to sell a short in route to burn the DB but he had safety help over the top.

Benny Snell Jr./RB – Snell was limited to special teams duties and it wasn’t very special. He was not in on any tackles kick coverage. On kick return, he was one of the up backs and on the 2 kick returns he blocked as many guys as I did. Not a good debut on special teams and if he wants to stay there he better start doing something.

Ulysses Gilbert III/ILB – It wasn’t very special for Gilbert either unfortunately. I believe he was on all four phases of kickoff and punt and he also recorded no tackles. On kickoffs I didn’t see much from him as a blocker or in coverage. On punt coverage he was on the end of the line on the left and he gave up some ground as a blocker. It didn’t cause any negative plays but if I’m an opposing special teams coach I’m taking notice. One positive was he did get some penetration on field goal block. He had one block in the preseason and wouldn’t be shocked to see him get another this year.

It was the first game for these guys and it was a terrible game for the team.  They got their feet wet and got the butterflies out. So I’d expect improvement across the board in week 2.