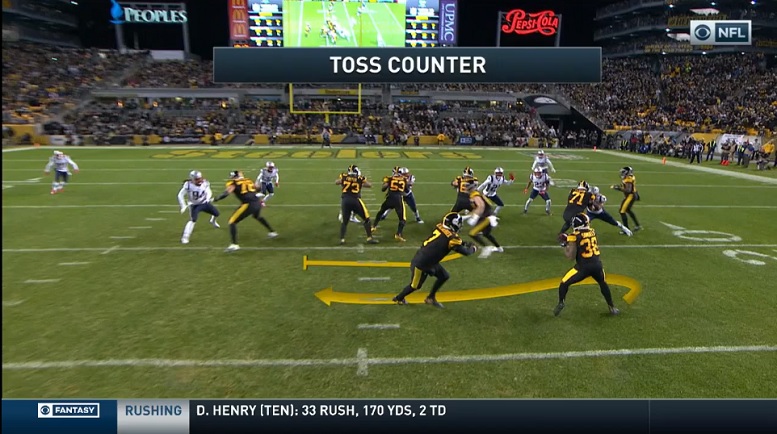 The Pittsburgh Steelers will open their 2019 regular season Sunday night against the New England Patriots, the defending Super Bowl Champions. While the Patriots did win it all last season, the Steelers were the last team to beat them and they did so in Week 15 at home.

Not only did the Steelers win that home game, they did so with then-rookie running back Jaylen Samuels as their starter as James Conner sat that contest out with an ankle injury. Samuels played extremely well in that game as he registered 142 rushing yards on 19 carries and caught two passes for another 30 yards. Because of that strong performance on the ground that Samuels had in that week 15 win over the Patriots last season, Steelers quarterback Ben Roethlisberger was asked Wednesday during his media session if the Patriots defense essentially gave the Steelers offense the run in that game so that the unit could concentrate on taking away then number-one wide receiver Antonio Brown.

“Yeah, I mean I think it was a little bit of, you know, James [Conner] didn’t play in that game, it was Jaylen, so I think it was also I don’t think they really knew what we were going to do in terms of you don’t have your number one running back in there, either,” Roethlisberger said. “So, you know, they always do a good job of kind of comboing your top two guys, whether that’s a receiver or running back, or tight end. I mean whoever they deem as your top two, they’re going to double and that’s what we anticipate this year. The key is going to be early on, figuring out who they deem as your top two.”

So, when the Patriots do combination cover the Steelers top two receiving threats like that does it indeed open up the running game more?

“Well, I think that the way that they had DBs on the field, you know, they wanted to stop the passing game,” Roethlisberger said regarding a similarly phrased question. “So, you add extra DBs. You go dime and nickel packages and that makes smaller guys that are in for coverage, not necessarily for stopping the run game. So, that’s why you try and take advantage of those situations depending on who’s on the field defensively.”

Roethlisberger was then asked if he thought the Steelers surprised the Patriots last season with Samuels, the team’s fifth-round draft pick out of North Carolina State who didn’t play much until later in the season when Conner went down injured.

“I thought Jaylen played a great game,” Roethlisberger said. “You know, he did a little bit of everything and you’re not going to surprise the Patriots twice, I promise you that.”

Will the Steelers be inclined to use Samuels more in Sunday night’s road opener against the Patriots along with Conner?

“We’ll see,” said Roethlisberger. “Like I said, you’re not going to get over on the Patriots twice. That coaching staff’s pretty good and their players are pretty darn good, too. So, we’ll have to, you know, figure some new things out.”

It’s hard to tell right now how exactly the Steelers defense will ultimately try to attack the Patriots defense Sunday night. Additionally, you can bet that several offensive adjustments will need to be made throughout the game as Roethlisberger admitted on Wednesday that the Patriots defense is challenging in more ways than one and especially due to all of the looks they like to utilize in an effort to confuse opposing quarterbacks and offensive coordinators.

“Yeah, they will,” Roethlisberger said. “Like I said, they’ll, they’ll usually double your top two guys, which always makes it tough and you’re just not sure which plays they’re going to do it on, and which plays they’re going to double one guy, not the other. So, it’s going to be trying to get a grasp on it on the sidelines of what’s going on. And then being ready to adjust while you’re on the field, kind of almost mid snap. You know, that’s why they’re successful and they make it tough.”