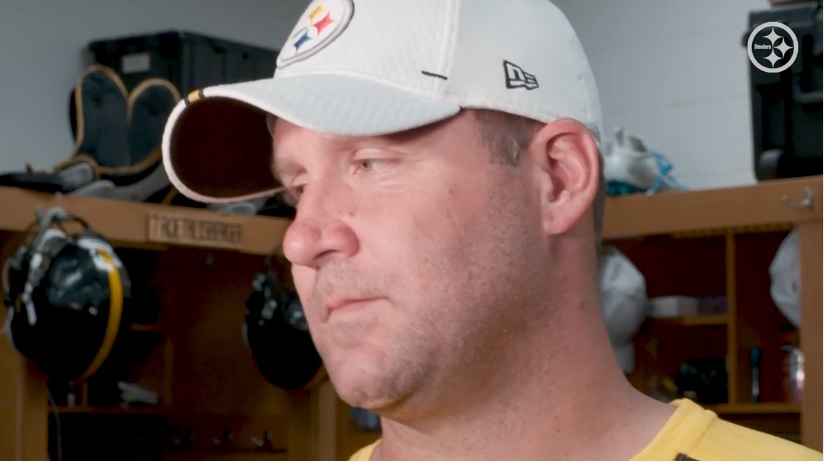 For Steelers fans, you might want to hold off watching the pre-game coverage until right at Sunday’s 8:20 kickoff. Anything shown before hand is going to make you wince. The New England Patriots will unveil their most recent banner and ceremony to celebrate last year’s Super Bowl victory, one that ties them with the Steelers for most Super Bowl victories.

But for Ben Roethlisberger, he’ll actually try to enjoy the moment.

“I think it’s cool be to be apart of,” Roethlisberger told reporters Wednesday afternoon. “Honestly. You go out there and you watch it and you sit there and you try to channel it to say, ‘ok, that needs to be us next year.’ That’s the way I look at it.”

This, unfortunately, isn’t the first time Roethlisberger has been part of a banner ceremony for a Lombardi he didn’t win. The same happened in 2015 when the Pats were coming off their 28-24 victory over the Seattle Seahawks, the infamous “Why Didn’t Pete Carroll Run It?” game. The Steelers lost that ’15 game, 28-21. Brady picked apart the defense, tossing four touchdowns, three of which came in the first half.

Roethlisberger’s response surprised be but it does make sense. He is entering the final years of his NFL career and by this point, even though he’s been to three of them, knows how hard it is to get to the Super Bowl. He’s the only player in that room with a ring and still has fallen short multiple times, including two defeats to the Patriots in the AFC Championship Game.

Heck, even New England knows how hard it is. Their path to the Super Bowl last year was razor thin, saved by a Dee Ford offisdes call that negated a game-winning interception by the Chiefs.

If Ford lines up two feet behind where he did, the Pats aren’t in the Super Bowl, much less winning it. So at this point in his career, it’s fair for Roethlisberger to appreciate all those moments. Especially in the scope of a motivational tactic. The Steelers have the pieces to make a Super Bowl run in part thanks to a – on paper – better defense that will hopefully create some much-needed turnovers.

Everyone’s motivation is different and if Roethlisberger can use those few minutes in a positive light, then the Steelers are better off because of it. Of course, simply winning in Foxborough, they’re 1-4 there in the Roethlisberger era, is a different matter.