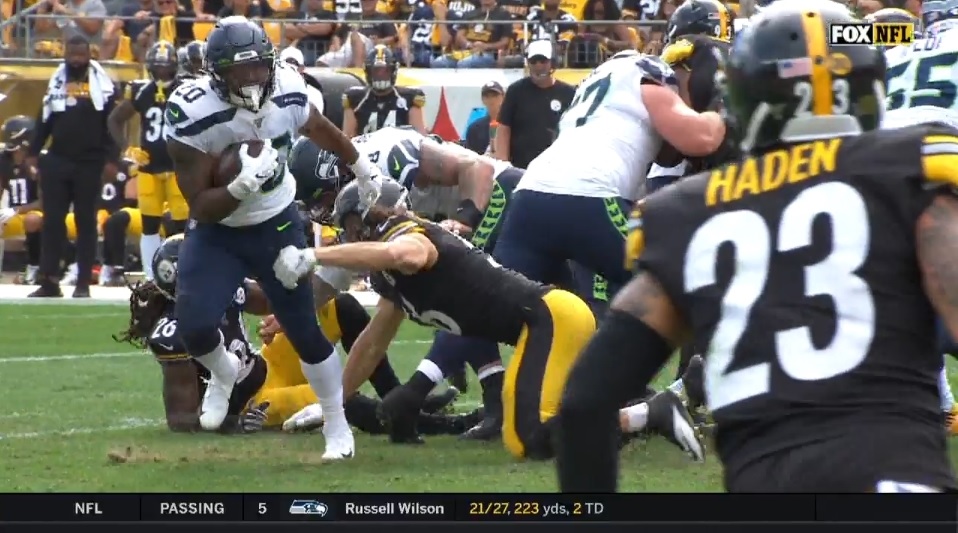 Once again, the Pittsburgh Steelers dropped a tough game, falling to 0-2 on the season, and just like in Week 1 against New England, the loss came down to a few plays here and there.

Despite turning in a strong tackling performance in Week 1, the Steelers reverted back to their old ways in Week 2, struggling to consistently get guys on the ground in big spots (looking at you, Anthony Chickillo and Bud Dupree).

Let’s get into the Week 2 missed tackles report so we can fully move on to San Francisco.

Let’s start with the obvious: Anthony Chickillo should catch a lot of heat this week for his dreadful missed tackle on Rashaad Penny’s 37-yard touchdown in the third quarter (more on that later), but if he’s mostly on this team for his special teams prowess, he can’t be missing tackles in that area of the game.

Terrell Edmunds had a strong game, aside from the missed tackle and the touchdown given up to DK Metcalf. I’m excusing him for the PI call because the new rule is dreadful.

Bud Dupree had one job on 3rd and 16, and he failed at it, while Devin Bush recorded his first missed tackle of his career.

Early in the game, the Steelers got off to a bad start in the missed tackles department as Edmunds whiffed in space against the explosive Tyler Lockett.

This is a quick hot route for Russell Wilson and Lockett as Mike Hilton blitzes. Edmunds has a clean look at Lockett, but he ducks his head at the last second, losing sight of his target, who makes a subtle move to his left after the catch, taking away the angle for Edmunds.

After that, Lockett scampers for another 15 yards or so, moving the chains.

Opening up the second half, the Steelers’ kick coverage team got off to a slow start out of the locker room.

Chris Boswell does a great job of placing this kick into the left corner to try and hem in Penny, but Benny Snell and Ola Adeniyi miss early with arm tackles before Tyler Matakevich is clearly dragged to the ground without a call. Chickillo then misses before a host of Steelers can get the Seattle running back on the ground.

I love that Snell is one of the guys to get back into the mix and finish off the play. It’s obvious he just wants to play football and is will to do whatever it takes to do his job.

Finally, we get to the biggest game-changing play from Sunday’s loss, at least in my eyes.

TJ Watt had to leave the game briefly due to an unknown injury on a previous tackle, so Chickillo had to come into the game as the left outside linebacker.

The Seahawks went right at him, leaving him unblocked on this play. He does everything right after the snap, including sinking into the line to close off the inside line. However, he doesn’t have an answer for Penny’s juke in the backfield, completely whiffing in horrendous fashion, allowing Penny to get off to the races, giving the Seahawks a 21-13 lead.

Side note: shout out to Wilson on this play. He lays a block on Sean Davis and then a block on Edmunds downfield, helping spring Penny to the end zone. What a player.

The Steelers got Vance McDonald involved early and often Sunday, one week after being nearly invisible against the Patriots.

On Pittsburgh’s second drive of the game, McDonald forced his first missed tackle of the game.

This is a simple tight end screen that the Steelers utilize a lot. Seattle linebacker Mychal Kendricks knew what was coming and was in great position to make the stop, but McDonald is too strong, running right through the arm tackle.

Later on in the same drive, Snell got in on the action.

Bradley McDougald looked silly in the open field. So much for Snell not having any juice as a runner. That’s a terrific open-field juke, allowing him to pick up additional yardage on a great 3rd and 1 run.