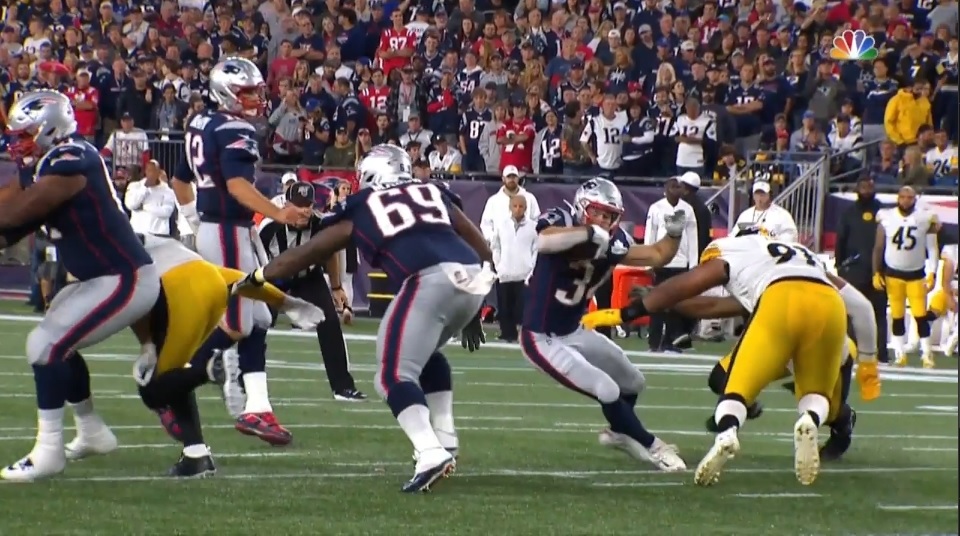 Pretty much everything went wrong for the Pittsburgh Steelers Sunday night against the New England Patriots in Foxborough on Sunday Night Football.

Fortunately for the Black and Gold, tackling wasn’t really an issue Sunday night.  Yes, two misses occurred on a Patriots touchdown, so the Steelers didn’t give themselves a chance to defend blades of grass after the mistake. However, tackling overall was solid. Some of New England’s big plays were coverage busts and boneheaded decisions to not play the ball, not missed tackles. That’s at least a positive start to the season.

Let’s get to the Week 1 missed tackles report so we can put an end to a dreadful first week and fully focus on Seattle.

You hate to see some of these names on this list, especially the likes of Joe Haden and Terrell Edmunds. They’re part of the last line of defense out there, so they can’t have tackling issues.

The pair combined to miss on Josh Gordon’s 20-yard touchdown Sunday night, but more on that later, because I think there was a more egregious miss Sunday night that was really tough to watch.

Stephon Tuitt had a decent game when watching the All-22 film. He was in the backfield on a number of snaps and was tough to block when playing the run. But this miss here against Rex Burkhead in the fourth quarter that led to an 11-yard gain simply can’t happen.

I slowed this down just so you can see it a bit better.

Tuitt and Bud Dupree are in the backfield almost immediately, and yet Burkhead wiggles out for a first down. Watch the cut by Burkhead. My goodness! Tuitt is left grasping at air, while also taking out Dupree in the process.

This was a tough one for me; I went back and forth on giving Dupree a miss or not, and I obviously ultimately settled on a miss. He had more than enough time to get his hands on Burkhead before Tuitt arrived, and yet he hesitated and ultimately dove for his legs, whiffing and getting pummeled by his own teammate.

Tuitt though, he makes Ted Karras look silly, but then drops his head going towards Burkhead, can’t see his target and gets juked out of his mind. Yuck.

Jumping back to earlier in the game, Haden and Edmunds appear.

These two misses might not happen if there wasn’t a communication breakdown with coverage assignments on a play in which cornerback Steven Nelson blitzes, leaving Gordon wide open on crossing route. However, the miscommunication unfortunately happened, leaving Gordon running free.

Haden has to make this take, but it would be nice to see Edmunds help his fellow defensive back by cleaning Gordon up. Instead, he runs right past Gordon, allowing the Pats receiver to pretty much waltz into the end zone with a little bit of a push from Anthony Chickillo that accomplishes nothing.

This was a weird return by Bolden. He appeared hesitant and unsure of where to go, which allowed Nix all the time in the world to break down and try to make the stop. He does just about everything right, except the most important part: getting him onto the ground.

Offensively, it was a quiet night in the forced missed tackles department as the Steelers forced just 4 misses, meaning they lost the missed tackles battle by a mark of -2.

James Conner had a really quiet night, playing just 42 percent of the offensive snaps, but he was effective as a receiver.

Lined up in the slot here, Conner runs a simple quick out against Pats linebacker Jamie Collins. After that, Conner does his job of winning 1-on-1.

That’s a sharp, quick cut inside of Collins after the catch. A small portion of the fan base continues to put down because he’s someone unexplosive and not very good in his or her eyes, but the film doesn’t lie. He does things like this often.

Ryan Switzer forced his lone miss on the kick return following Phillip Dorsett’s 58-yard touchdown in the third quarter, while Vance McDonald ran over Collins late in the fourth quarter on the final play of the game. He should have been used much, much more.