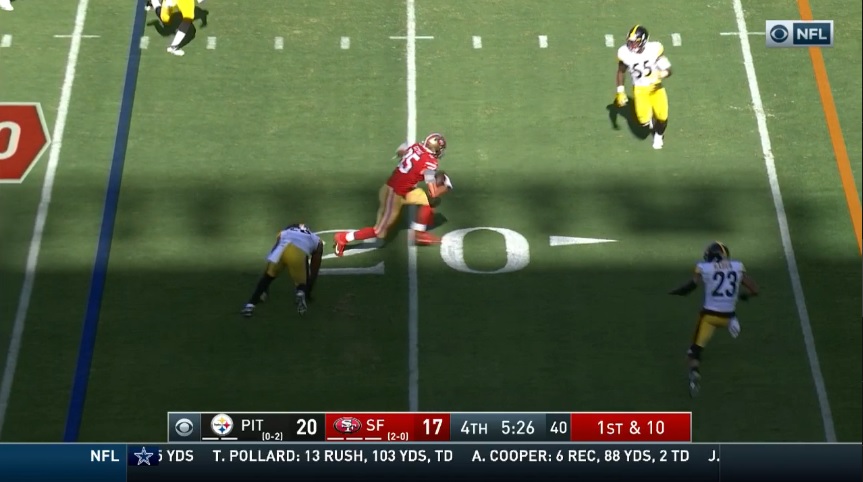 Another week, another loss for the Pittsburgh Steelers, this time in similar fashion to Week 2’s debacle.

It’s been a frustrating start to the season for the Black and Gold, and Sunday’s loss to the San Francisco 49ers was a microcosm of all that has gone wrong through 3 weeks. What reared its ugly head though in Week 3 was tackling issues.

Against the 49ers, Pittsburgh had a tough time getting guys on the ground, while also failing to make guys miss when in possession of the football. To me, that screams the Steelers don’t have anyone right now that can consistently make a play with the ball in their hands.

That’s a huge problem moving forward, especially when you can’t get stops in the second half, or sustain drives offensively.

Let’s get to this week’s missed tackles report so that we can move on to Cincinnati.

What obviously jumps out right away from Sunday’s report is the 4 combined missed tackles from the starting inside linebacker duo of Mark Barron and Devin Bush.

Barron was about as bad as it gets on Sunday, while Bush had his ups and downs, but mostly ups. Aside from the struggles by the inside linebackers, the real glaring issue from Sunday is the inability of coverage units to get guys on the ground consistently, led by Artie Burns, who may find himself tied to the bench this week after the lack of effort displayed on 3 straight punts.

Through 3 games, 35 percent of the Steelers’ missed tackles have come on special teams. That’s…not great!

Anyway, let’s get into the breakdowns.

Special teams coverage – namely punt coverage – was a disaster for the Steelers on Sunday.

Now, Richie James Jr. is a shifty player with the ball in his hands, but this display of effort and all-around tackling is inexcusable.

Ola Adeniyi is the first miss, largely because he ducks his head. Then, Burns doesn’t even try; he’s just jogging. That’s a miss due to poor effort; he should have been the one to make the stop if he was locked in.

Later on, Jaylen Samuels misses after fighting around a block. I’m not going to fault a running back trying to tackle someone on special teams. Good news is, Burns fights back into the play to make the stop.

I’m not sure why Fitzpatrick decided to jump on this one, but Juszyzck is an animal, throwing the second-year safety off of him with ease before then battling for a few extra yards.

Not the way you want to make the missed tackles report there, Minkah.

Finally, late in the game, Barron and Bush had their worst showing in the tackling department, as the duo looked absolutely silly in space against George Kittle.

First off, Barron can’t stay in coverage with Barron, so there’s that. After that though, that’s two straight ankle-breaking moves by Kittle in space. Barron looked disinterested all game long, which is a major concern. I can’t figure out what Bush is doing here. He needs to be more aggressive to make sure plays like this don’t happen again.

The great news is young receivers Diontae Johnson and JuJu Smith-Schuster made plays after the catch on Sunday. The bad news? They struggled to consistently create separation against the 49ers.

Smith-Schuster’s 2 forced missed tackles came on his 76-yard catch and run, while Johnson’s came on an all-out effort play.

On the crossing route here, Johnson catches the ball short of the sticks, but watch that move on Richard Sherman right after the catch, getting himself free of a tackle short of the sticks before then powering through the next San Francisco defender for the first down.

I love the effort from Johnson there; that’s a really positive play to build off of.

Once again, James Conner isn’t the problem with the run game right now. He has very little time and space to even think about finding a running lane. The offensive line has been pretty bad in front of him from a run blocking perspective; so before you go and bury him for his numbers, rewatch the game.

This play right here is a microcosm of what Conner faced all game on Sunday. He’s contacted almost as soon as the ball gets to him. However, on this play he’s able to make Ronald Blair III miss in the backfield before then picking up 10 yards.