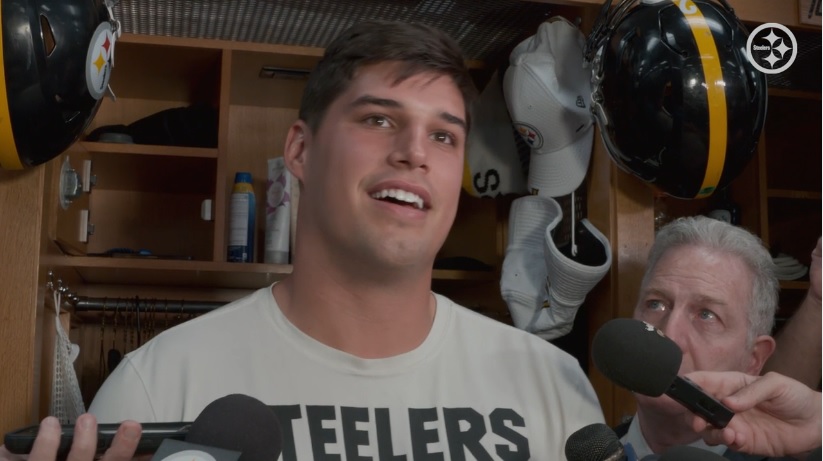 Ready or not, Mason Rudolph is next man up. The good news? He sure sounds like he’s ready to roll. The new Steelers’ starting QB spoke to reporters for the first time since the news Ben Roethlisberger’s season is over due to his upcoming elbow surgery. Rudolph made his NFL debut in yesterday’s loss to Seattle and will make his first start next Sunday against the San Francisco 49ers. He said he’s ready to step up.

“I worked for this and I wanted to be in this position,” he said via the team website. “That was always the plan…I just enjoy playing with all my teammates man and coming to work and playing professional football for a living. It’s a joy and what other things happen, that’s out of my control.”

Rudolph played reasonably well for a debut, showing poise and the ability to improvise. His first career TD came on a semi-busted screen pass to Vance McDonald, one where Rudolph had to change his arm angle to avoid the rush and complete the pass.

And though he’s taking Roethlisberger’s place, Rudolph said he’s learned all he can from #7 since being drafted last year.

“When you’re the backup you never want to overburden the starter with questions. But he’s been great with answering them. Our relationship definitely has seemed to grow this year. Just like anything. When I was the starter at Oklahoma State, you’re not going to be best buddies with the freshman. You’re just not. He’s younger. But he’s done a great job of opening up to myself and the rest of the guys in the room.”

Talk is just that, it doesn’t mean much if you can’t back it up, but listening to Rudolph today, the moment doesn’t seem too big for him. Throughout the interview, he was candid and honest, admitting he thought about what the future held when he got home last night. His poise and confidence in discussing his role translates onto the field. Even as a rookie, we noted that while he struggled with taking care of the football, he never seemed overwhelmed.

Here’s what we wrote in our 2018 training camp recap.

“Hard not to be impressed by Rudolph, even understanding at times he looked like a rookie and he didn’t light the world on fire. Love his command and – I keep going back to this word – poise for a rookie.”

Though this will be the first time he’s prepared as the literal starter, his approach isn’t going to change.

“You never know,” he said. “You gotta attack every day like it’s your last. Pour everything into it and prepare like you are the starter. That’s what I tried to do last year even though I was the #3 guy. As tough as that was, I still tried to wake up, accomplish goals in practice, and get the reps that I could and make the most of them.”

Neither is the complexion of the offense.

“Every quarterback has their favorites out of the gameplan. I always star my stuff and listen to what Ben likes in meetings Saturday night. I just made sure I communicated that stuff to Randy and I was ready to roll with my favorites. But I don’t think [the offense] going to change. I’m a prototypical guy and that’s kinda our offense, what they ask us to do, and I don’t see that changing at all.”

One thing that could be a little different? The amount of playaction. Sharp Football’s Rich Hribar noted the Steelers used a lot more of it with Rudolph than they have with Roethlisberger.

If PIT has to turn Mason Rudolph, silver lining could mean more O versatility. Rudolph used play action on 30% of his dropbacks yesterday while Ben has regularly been at the bottom of the league since he sits in shotgun/spread so often. Ben hasn't had a 15% PA rate since 2014.

And conventionally, that’s how you would expect to prepare a young quarterback. Even in a different era, that’s how Roethlisberger got his start. A run-first offense balanced by playaction and boots. Though Rudolph’s arm is just average, his placement and accuracy downfield is very good, which should allow for this offense to still take shots and keep that critical vertical component.

But we’ll all find out starting Sunday afternoon.