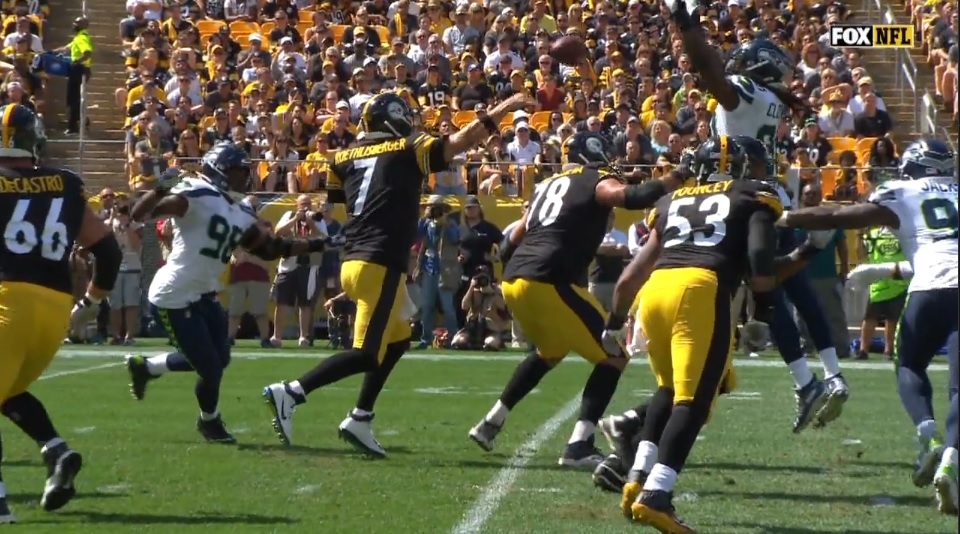 Think about the great, or heck, even good, Pittsburgh Steelers’ teams over the years. The dynasty of the 70s. A ball controlling running attack and a defense that made quarterbacks wish they played baseball instead. The 2005 Super Bowl winning team. Hefty offensive line, attacking outside linebackers. The 2009 champs. An offense led by a hard-nosed QB who could hit you over the top and a vaunted defense with a physical, intense secondary.

Even in years where the Steelers didn’t come away with the ultimate prize, you knew who they were. Two years ago, their last playoff appearance, they had a big play offense with a power run game and a defense, that yes, struggled, could at least generate consistent pressure.

The point is this. For as long as I could remember, you could sum up this team’s identity in a sentence or two.

The big play offense they had? Gone. Root canals are less painful than watching this unit flail around the field, relying on the defense giving them short fields or penalties by the opposition to set up scoring drives, both of which happened Sunday. The run game hasn’t been allowed to get going, JuJu Smith-Schuster taken away by defenses for long stretches of the game, and there’s no vertical component to the group. That’s something that’s existed since virtually the late 1970s and today, at a time where passing the ball has never been easier, the Steelers have gone into a shell.

Defensively? At least they’re forcing a couple turnovers. But it’s not a unit that’s going to carry this team. Put it this way. If the strength of your team is this defense, and right now, it may very well be, you’re in trouble. Special teams are charitably average and wholly unremarkable.

What does this team do well? What identity do they have? Bueller?

Sure, it’s early in the year and lots of teams and trying to find themselves. But how long is that going to take? Similar to 2013, by the time the Steelers find their stride, the season might already be over. Fall to San Fran six days from now, drop to 0-3, and you have Lloyd Christmas’ ‘so you’re saying there’s a chance’ odds of making the playoffs.

Wanna know the craziest part? It shouldn’t be so hard for this team to find itself. The front office is as stable as any in the NFL. Their competency is fair to question but team-building isn’t foreign to Mike Tomlin or Kevin Colbert. The coaching staff is long-tenured and in-house so it isn’t an issue of an outsider trying to gel with the group. There’s a franchise, Hall of Fame quarterback, a Pro Bowl receiver, running back, and excellent tight end bolstered by a strong offensive line. Defensively, they’re experienced enough, only two of the regulars are in their rookie or sophomore seasons, and it’s littered with top draft picks.

So why is this so hard? That, above all, might be the most baffling part.

The Steelers feel unrecognizable. They’re like walking into your 25 year high school reunion. The star receiver of your high school team? Now he’s a balding, litigation attorney. The weird dude who asked for extra homework? CEO in the tech field with a bank account that’d make the cast of Shark Tank blush. Everything with this team is upside down.

If they don’t figure it out – fast – the only constant from last year will be the end result.