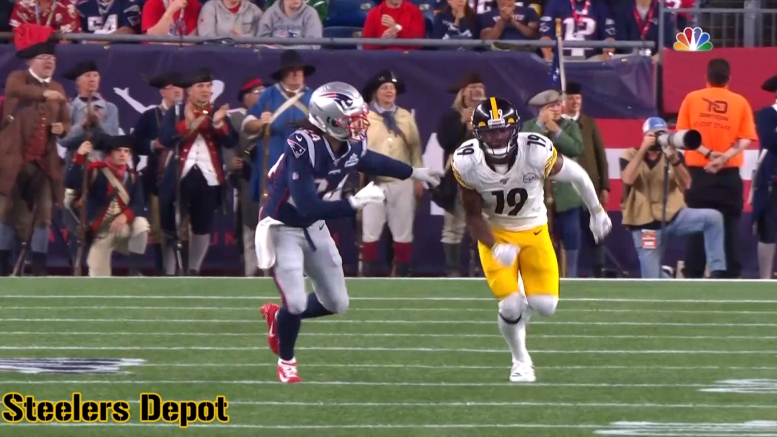 Sunday’s game against the New England Patriots was the first opportunity for third-year wide receiver JuJu Smith-Schuster to step into the number one role on a full-time basis since the Pittsburgh Steelers traded wide receiver Antonio Brown back in March. While he caught six passes for 78 yards, his performance and that of the entire offense—the entire team—left much to be desired in the commanding 33-3 loss in the opener.

Smith-Schuster even finished the game hobbling on the sideline after he was tackled awkwardly by the ankle on the final drive. It looked as though he might have suffered an ankle injury, but the team has always maintained it was a toe.

But that appears to be behind him. “Toe felt great”, he told reporters in the locker room recently, via a video of a pool interview on the team’s website. “Just running around the house, chasing Boujee, making cuts left and right, so I’ll be ready to play”. Boujee, of course, is his dog. And yes, he has his own Instagram profile.

The loss to the Patriots also appears to be behind him, though he said it wasn’t easy. It simply is what must be done. “It’s tough, man”, he said. “You start with your opener away and you lose, tremendously, and you’ve just got to keep moving forward. It’s part of the NFL”.

The Steelers are preparing for their home opener tomorrow against the Seattle Seahawks, who are coming off a narrow victory over the Cincinnati Bengals while they were playing on their home turf. The Bengals’ offense certainly looked much better against Seattle than the Steelers’ did against New England.

“On the offensive side, we’ll take the accountability” for the performance, Smith-Schuster said. They scored only three points, failing in two trips inside the red zone. They had a drive stall on the one-yard line, where they settled for a field goal, and Ben Roethlisberger also threw an interception on another occasion, though that was from outside of the 20-yard line.

When asked if he felt the remarks judging the Steelers’ offense harshly without Brown were premature, he said, “there’s 15 more games to be played. We just keep moving forward and go from there”. There are a lot of new or relatively new components still being worked in, on both sides of the ball, and that could take some growing pains.

And nobody has won in New England in a while. They’re on something like a 17-game home winning streak, so it doesn’t happen too often. While the scoreboard was ugly, losing to the Patriots in Foxboro is kind of just what happens. Tom Brady is 116-19 at home over the course of his career. He’s literally averaged one loss at home per season over the course of his career. They went 10-0 in Foxboro in 2018.