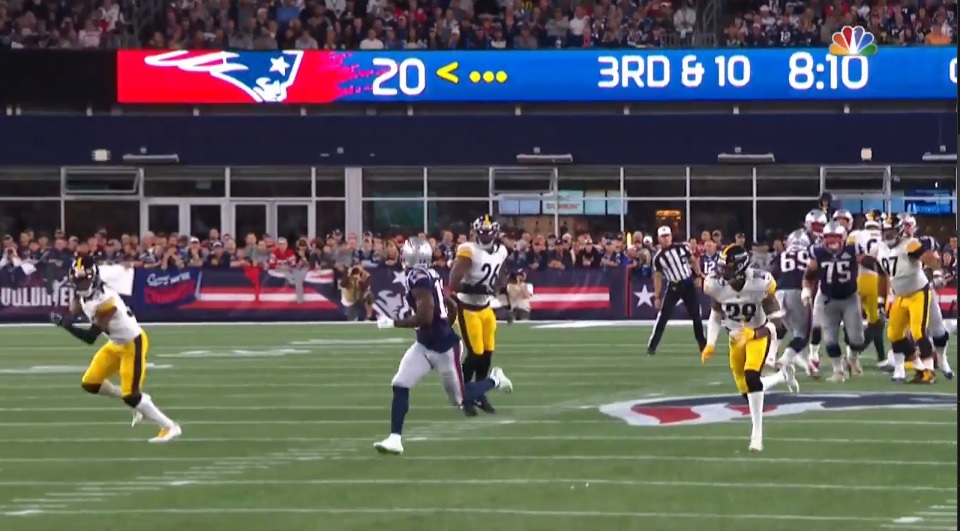 If Sunday’s game wasn’t over before this play, it definitely was after. On 3rd and 10 from their own 42, Tom Brady dropped back and hit a wide – and do I mean wide – open Phillip Dorsett for a 58 yard score. That made it 27-3, salting the game away from a lifeless Pittsburgh Steelers’ offense.

So what the heck happened? Here’s what Mike Tomlin said after the game.

Matter-of-fact enough, I suppose. But “we busted it” is obvious to anyone who has even a vague idea of how football works.

So again I ask. What the heck happened?

Looking at any individual play can make it difficult to know the coverage. Especially ones where things go wrong. It’s easy to breakdown when everything is running smoothly. Trying to find the reason for failure? A lot tougher. One thing we can do is look at playcalls in similar down and distances to see if they can give us any clues. And lucky enough, they do.

The coverage the Steelers ran – well, attempted to run – on Dorsett’s game-clinching touchdown was the third time Keith Butler called it Sunday night. The safety rotation you’ll see in the clips below may look like Cover 3 but it’s not. It’s an inverted Cover 2. Remember, to beat Brady, you have to show him a lot of looks. Disguise not only your safeties but your whole coverages. That’s why Pittsburgh’s defense was so effective last year. And what Butler, in these moments anyway, attempted to do.

So before we get to the coverage bust, let’s see how it functions when it works as intended. This coverage was called on 3rd and long situations with the Patriots in their own territory. Here are the three down/distances when Butler called it.

Let’s break each of them down.

Pre-snap, it looks like a two deep coverage. Possibly Cover 2, possibly 2 Man. Patriots are in a 3×2 formation, strength to the field. 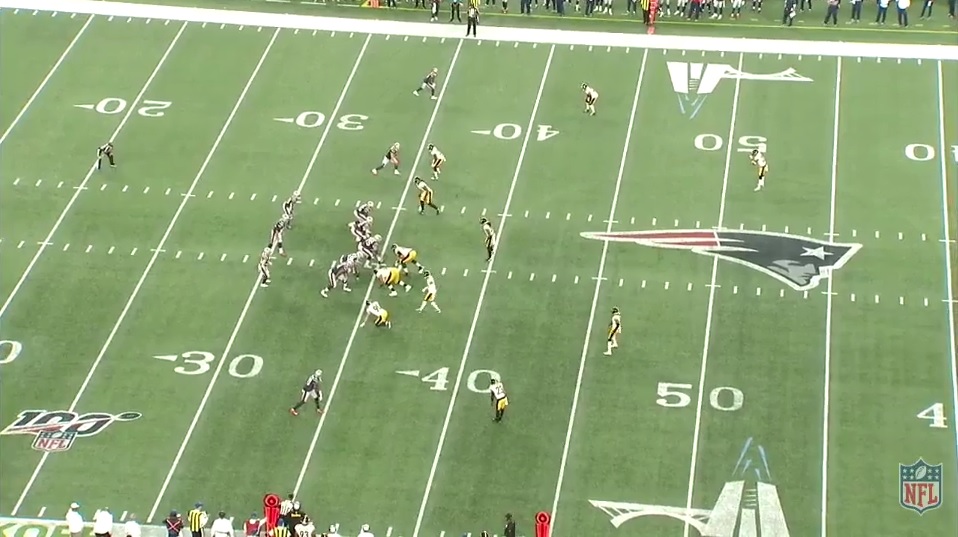 But on the snap, the safeties rotate. The safety to the strength of the formation spins down into an underneath zone. The weakside safety drops to the deep half in a Cover 2 technique (landmark on the numbers). The cornerback to the strength of the formation, and this is why it’s Cover 2, not Cover 3, also rotates into the deep half. The weakside corner plays a Cover 2 technique, sinking on anything vertical by #1 and driving on anything thrown to the flat. It’s 3rd and long so if the QB wants to hit the checkdown, get downhill, make the tackle, and you’re getting off the field. The strongside nickel defender works to the flat.

Here’s how it looks on paper. 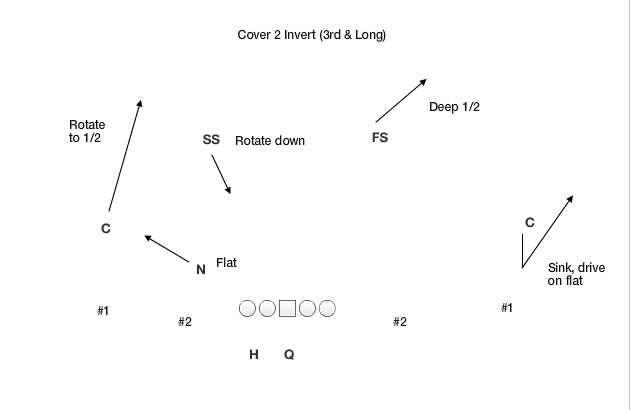 And here’s how it looks on this play. 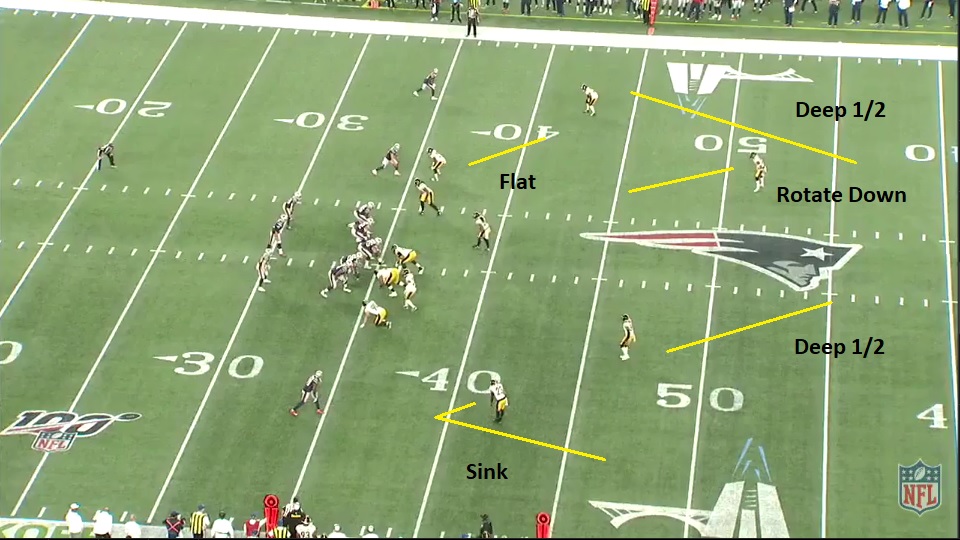 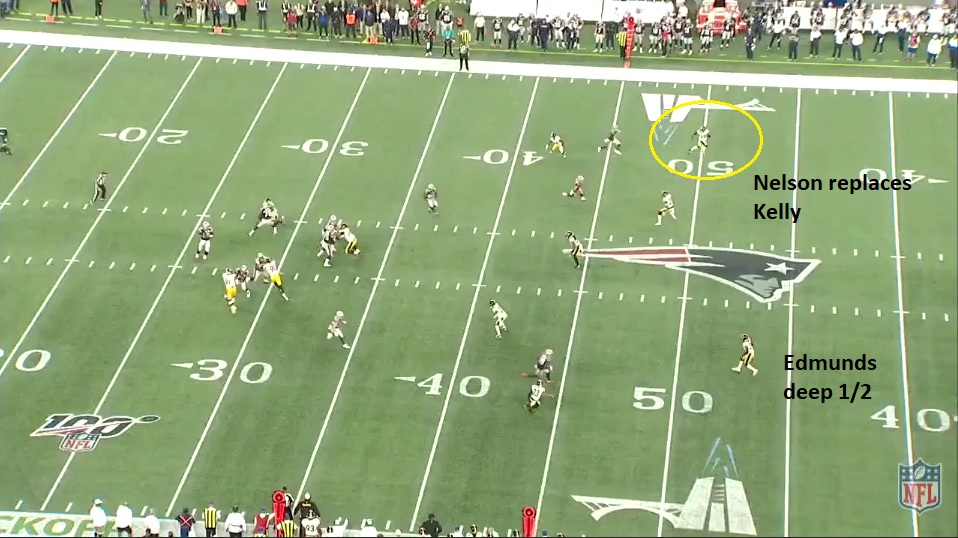 There are some issues on this play, Kameron Kelly is driving on a route he probably shouldn’t, and this should’ve been completed on the dig behind him. Ball came out of Brady’s hand weird and it fell incomplete. But that’s how the coverage works. 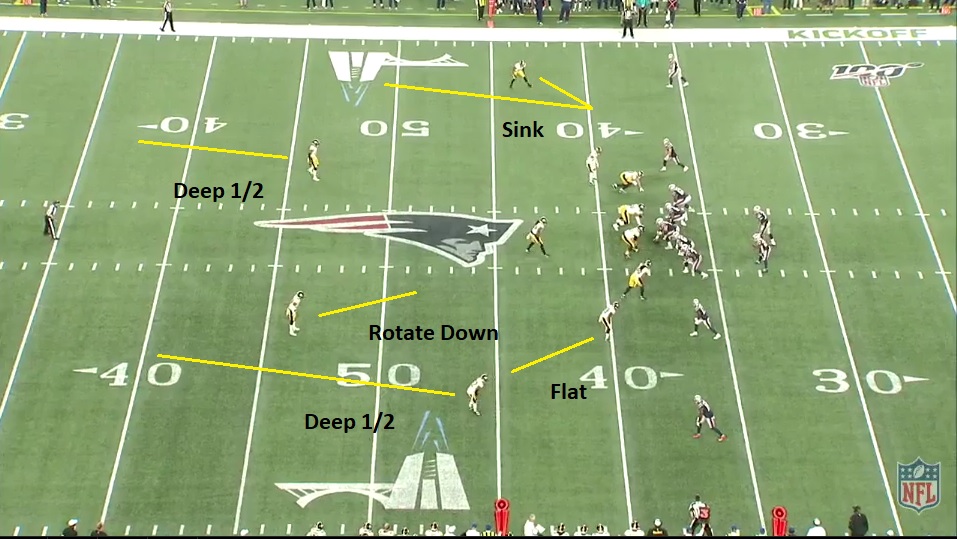 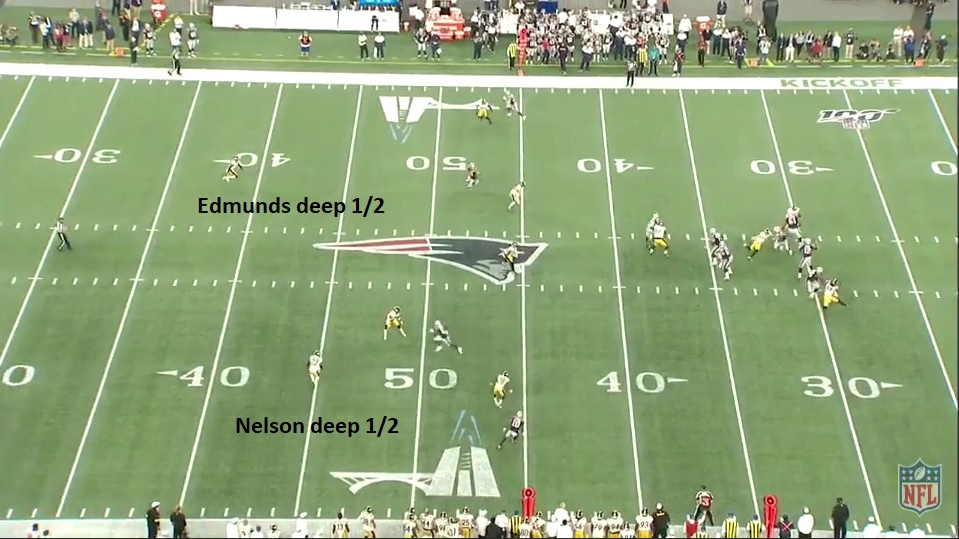 A stunt up front creates pressure and Brady is forced to throw incomplete hurriedly hitting his checkdown. Defense off the field. Really well done by everyone involved. Gold stickers all around.

Ok, this is where it all goes a bit sideaways. Understanding why is a bit more difficult. After all, the defense ran this without issue the first two times. Third time should be the charm, right?

I think the issue is the small wrinkle the Patriots had at the start of the play. Instead of initially lining up 3×2 like they had before (yes, they used motion earlier but the formation never changed), they line up 4×1 with Julian Edelman as the #3 slot left. 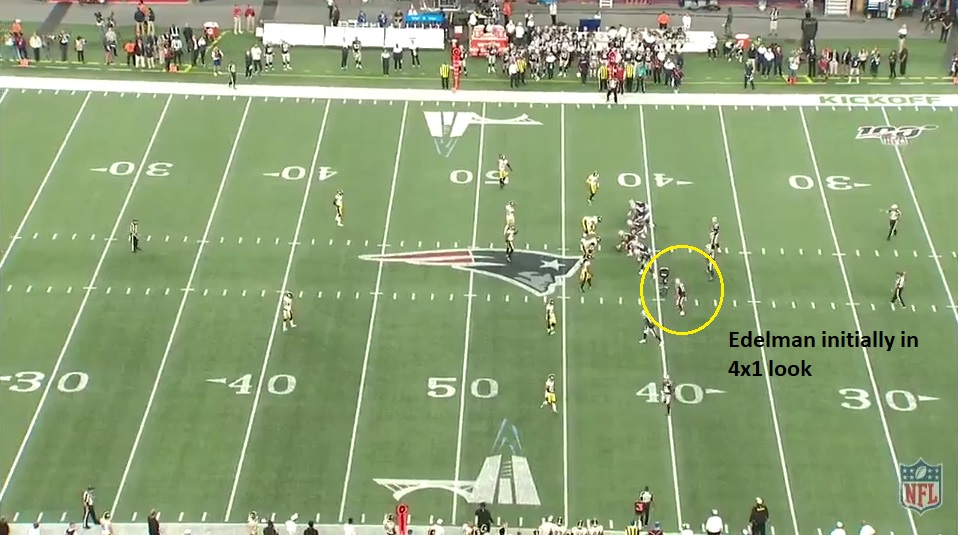 He then gets motioned across the field, returning them to 3×2, like you see above. 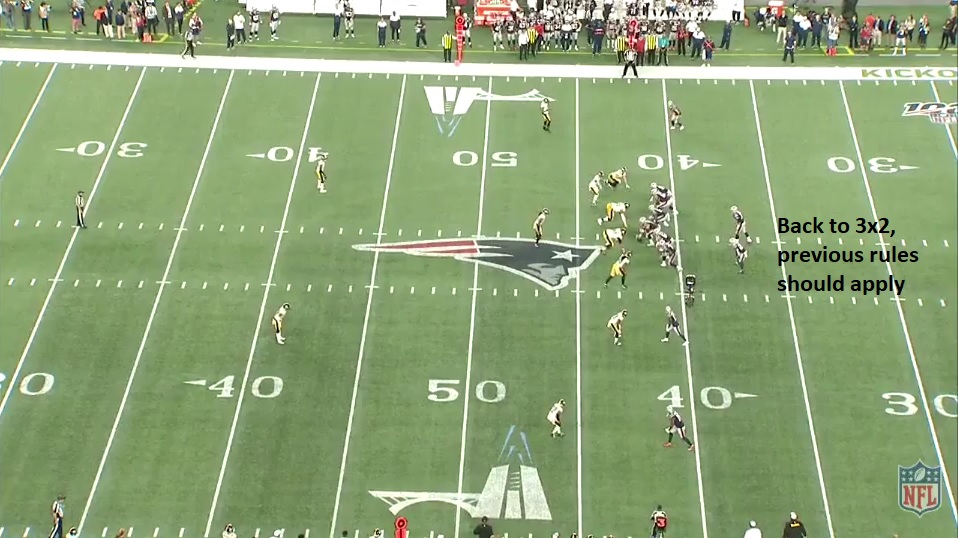 But I’m sure the Steelers have a different coverage for 4×1 as they do 3×2. You can’t play it the same way. You’re outnumbered if you get three verts to that four receiver side. So the defense never appeared to check out of whatever their coverage/check was from 4×1 to get them to how it should be played in 3×2.

The right side of the defense, Kameron Kelly, Steven Nelson, and Mike Hilton, all make the adjustment and play it correctly. But the left side doesn’t do the same. That’s where the miscommunication happened. Terrell Edmunds and Joe Haden are playing it the wrong way. Edmunds spins down even though he should be rotating to the deep half as the weakside defender. Haden is now playing the deep third when he should be playing the deep 1/2. With just one receiver to his side in the initial 4×1, him matching #1 vertical and Edmunds spinning down makes sense. Not in 3×2.

And that’s where the problem happens. 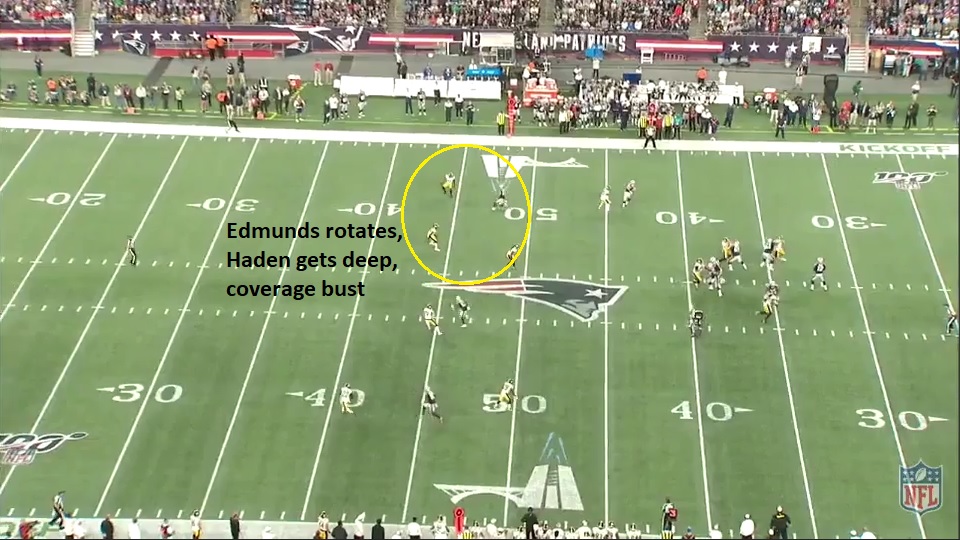 As Dorsett bends to the middle of the field to split the safeties (they’re expecting Cover 2 again so they’re stressing the open MOF), Edmunds never carries the route. Kelly points, Edmunds doesn’t see it, and even if he did, it’s too late anyway. Dorsett is long gone, blowing by the last line of defense, and it’s pitch and catch for the score.

One minor point to make is I don’t like the body language of the two young safeties, Edmunds and Kelly. To be fair, there wasn’t much obvious communication on the previous two plays but when you get the Pats shifting like they did, you’d like there to be some acknowledgment. Both players are static, rigid, with eyes solely on the QB. Overcommunicating is never a bad thing.

So bottom line? Kelly was right to work down. Edmunds didn’t play it right. Who exactly screwed it up? Did no one give Edmunds/Haden that check or did they get it and just not respond correctly? I don’t know. But I’m betting that is also on Edmunds, a young, still promising safety, working things out and having to take charge in the secondary instead of pairing next to a vet like Sean Davis. These are the woes of having two green safeties against a GOAT like Brady.

One last thing. I actually really dig this design by Butler. It isn’t brand new, to him or the league, but it’s a nice fakeout. Cover 2 pre-snap? But wait, the safeties are rotating so I must be getting Cover 1? Nope. It’s still Cover 2 with the corner taking the deep half. So you end up getting the pre-snap look, just dressed up a little differently. It’s a shame the defense messed this one up.

Add that to the numerous issues this team needs to fix for Sunday’s game against Seattle.