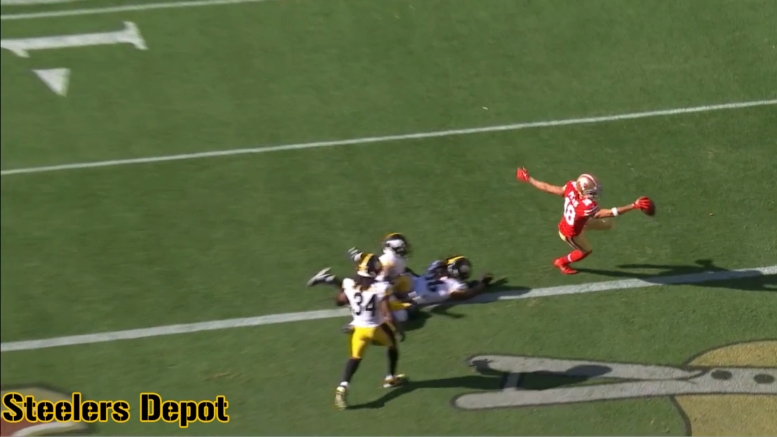 Though the Pittsburgh Steelers defense was able to record five turnovers—some of which were gifts from the San Francisco 49ers by virtue of a pair of botched exchanges and a dropped pass popped up in the air—captain Cameron Heyward takes no solace in that in the team’s 24-20 loss.

He knows his group had a chance to close the door in the fourth quarter, having multiple different leads in the second half, including a 20-17 lead heading into the 49ers’ final meaningful possession of the game. Jimmy Garoppolo led a 4:14 minute drive that ended up in the end zone for the game-winning score.

“We’ve just got to finish games”, Heyward told reporters in the locker room, via the team’s website. “The defense has just got to make a stop, and we didn’t. I don’t even know the down and distance on that last one we just had. Third and something. We didn’t get off the field”.

Sustained drives from San Francisco was a common theme. Half of their meaningful possessions during the game spanned over three minutes in length, and half of those went on for at least four minutes, with five possessions of eight plays or more.

“We didn’t get off the field enough. Sometimes we’ve just got to complement our offense. We started off so good. All we needed was one more stop”, he said, adding that the most they could have afforded to give up on that final drive was a field goal, which would have brought the game to a tie and given the offense a chance to respond.

They did make a stop on third and 11, but it was negated by a defensive holding penalty on Mark Barron. About 45 seconds later, they were in the end zone. That was also 45 seconds fewer for the offense to come back and try to score a touchdown. Instead, they turned the ball over on downs without reaching the first-down marker once.

Make no mistake, there are plenty of problems with the offense. But this loss continues a theme that plagued the defense last season, in which they entered the fourth quarter with the lead, or a share of the lead, and were unable to hold off their opponents in the final frame. This was the case in all but two of the seven games in which they failed to record a victory.

Especially now with the offense severely hindered without Ben Roethlisberger under center, this simply needs to be a defense that is able to slam the door shut in those critical moments. Yesterday, they were not able to do that. It feels as though it has been a while since they’ve done it at all, let alone on a consistent basis, though they did against none other than the New England Patriots last season—before giving it up to the New Orleans Saints a week later.