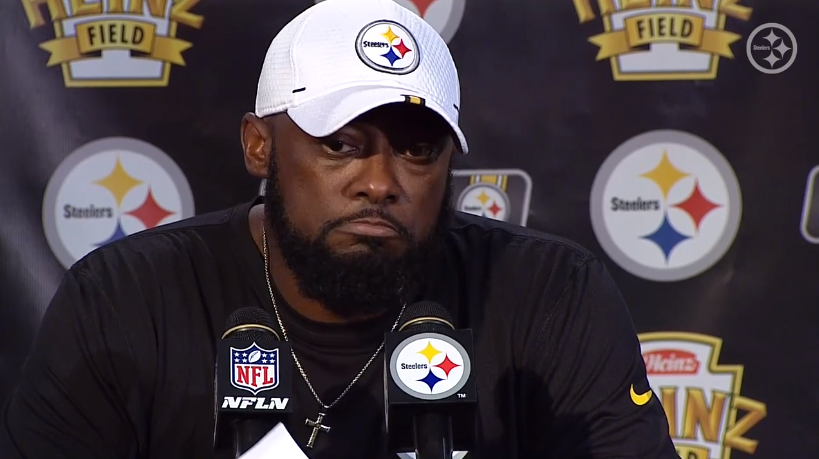 Just as they did last Friday in their preseason opener the Pittsburgh Steelers played their three backup quarterbacks Friday night in their second preseason game of 2019 at Heinz Field. This timer, however, the trio of Mason Rudolph, Joshua Dobbs and Devlin Hodges didn’t combine to put on as good of a performance against the Kansas City Chiefs as they did against the Tampa Bay Buccaneers.

As for Rudolph, who started Saturday night, he began the game just 3-of-7 for 15 yards in the Steelers first four offensive series. In the fifth series, however, he completed 7 of his 8 attempts for 65 yards. That final drive that he played also culminated in a 14-yard touchdown run by running back Jaylen Samuels.

At halftime, Steelers head coach Mike Tomlin was asked to recap Rudolph’s play in the first half.

“I thought he did some good things,” Tomlin said. “I thought he communicated well. I thought that the receivers didn’t necessarily help him. I thought we had some drops early on that affected his ability to get within rhythm. So, we’ll take a look at the tape. I like his demeanor; we’ll look at the minutia later.”

At least one of Rudolph’s early incompletions was indeed as a result of dropped passes. That drop belonged to tight end Xavier Grimble. Additionally. Rudolph had two other passes to wide receivers JuJu Smith-Schuster and Eli Rogers that probably should have been contested catches. The one to Rogers was Rudolph’s lone incompletion on that scoring drive.

After the game was over, Rudolph talked about his play Saturday night against the Chiefs.

“We hurt ourselves. There were some miscues and we weren’t as sharp, but I thought we finished well,” Rudolph said. “We kind of fought and came back and played the next play, played the next series and that’s all you can do in those situations. So, I was pleased.”

After Dobbs relieved Rudolph, it looked like he was initially on course to have the better game of the two quarterbacks as his first pass attempt was a deep completion to wide receiver James Washington for 40 yards. However, that first drive of his ultimately stalled and the next one, which followed a turnover created by the Steelers defense, ended with Dobbs throwing an interception deep in the Chiefs end of the field. Dobbs overthrew rookie wide receiver Diontae Johnson on a short underneath drag route on that play and he talked about the miscue after the game.

“You know, we just had a drag route and I just missed him,” Dobbs said. “If I put it on him, he probably scores. So, I missed the big play. Could have been a big momentum builder to go into the half, but that’s when you just got to hit him and allow him to score a touchdown.”

Tomlin addressed the media after the game, and he was asked if he thought that Rudolph separated himself any from the other backup quarterback Saturday night with his play.

“Not as we sit here right now,” Tomlin said.

It will now be interesting to see what quarterback rotation that Tomlin decides to go with next Sunday night in the team’s third preseason game against the Tennessee Titans. Starter Ben Roethlisberger is expected to open that game and play his first snaps of the preseason. He might play a full half as well. Will Rudolph succeed Roethlisberger, or will Dobbs? Also, will Hodges, who has represented himself well so far during the preseason, play at all against the Titans? We might get a few of those questions answered when Tomlin addresses the media later next week.