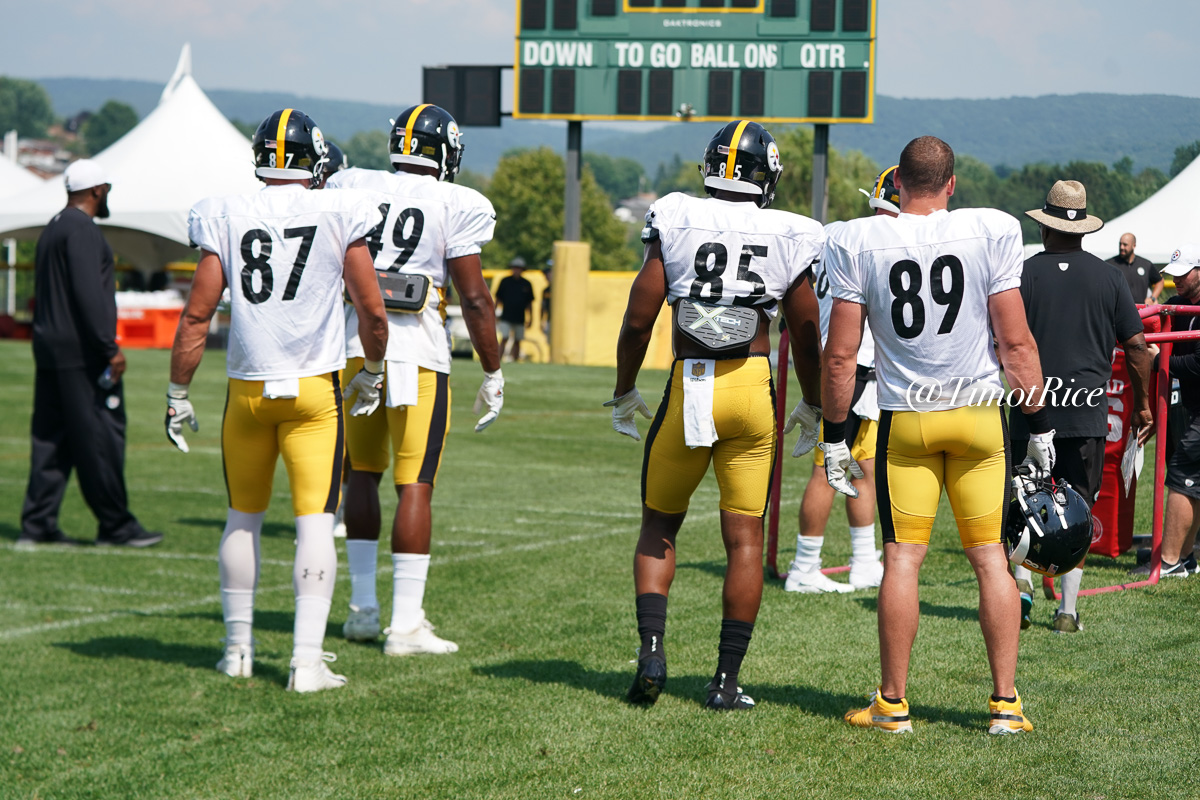 The Pittsburgh Steelers have a peculiar issue at the tight end position. After Jesse James got paid and left for the Detroit Lions, the Steelers tight end room was washed of a key depth cog in a room headed by an unfortunately often injured Vance McDonald. James’ departure represented a new need opening up for this team at the tight end position and they had to address it either in free agency or the draft.

The issue was that the draft brought on many other concerns, including wide receiver, inside linebacker, cornerback, and other positions that had to be filled out with depth. The Steelers decided to trade up and gave away their second round pick, which even further narrowed what they could cover in the draft as a whole. Thus, tight end never even got addressed until the fifth round of the draft in Zach Gentry.

That left Xavier Grimble as the default TE2 coming into the season, and frankly, that is just not acceptable. McDonald has never been the model of health, although he luckily had a full season last year, and if he were to get injured, Grimble wouldn’t be an adequate starter.

A big point to showcase that would be the boneheaded fumble in Denver last year. His inability to switch the ball to his outside arm or even try to avoid Will Parks caused the Steelers an easy touchdown. That is a football IQ issue, and while Grimble does have the athleticism to stretch the field, in 37 targets, he has three drops already. Last year he was targeted only seven times and had zero drops. Grimble’s an unremarkable player in nearly every category. He has worked to improve his blocking and looks like a lot better in that area. His hands and footwork are much better than they were when he arrived in Pittsburgh, but he has to make an impact in the passing game in order to be that strong TE2 that the Steelers need, and he has not shown any ability to do that at all.

Gentry, meanwhile, is not much of an athletic marvel at all. He is a mammoth 6’7” TE, but is incredibly stiff and lacks any real speed or explosiveness that could allow him to become a good route runner or great downfield threat. He is exclusively a seam buster at this point who can be a contested catch guy. That is fine for a TE3, but could you do better? Sure. His 13.5% drop rate during his time at Michigan is not exactly encouraging either. The blocking aspect of Gentry is his weakness. His natural leverage is terrible and he plays with that high pad level. He is too stiff to reach into the second level. He does have some good violent hands and actually not terrible feet, but that is why he is much better as a stalk blocker than an inline guy. That will be his role.

As for the rest of the roster, Christian Scotland-Williamson is really intriguing. He has been working his tail off at camp by all reports and it seems to be really paying off big time. He has made some big time catches and looks to be improving as a blocker, but is ready right now? I think he needs one more year to truly get there. Trevor Wood has been inconsistent at best with drops mixed in, and now with him being injured, any roster hopes seem to be fading. Kevin Rader has had some very obvious standout catches and moments, and could push a little bit, but there is not enough upside there to push him onto the roster.

Thus, there seems to be a black hole devoid of the true TE2 that the Steelers need. They cannot go into the season with this depth chart right now. They must look around the league for either a trade or perhaps any free agents they like to hit the market. Tight end needs addressed and it needs addressed badly.