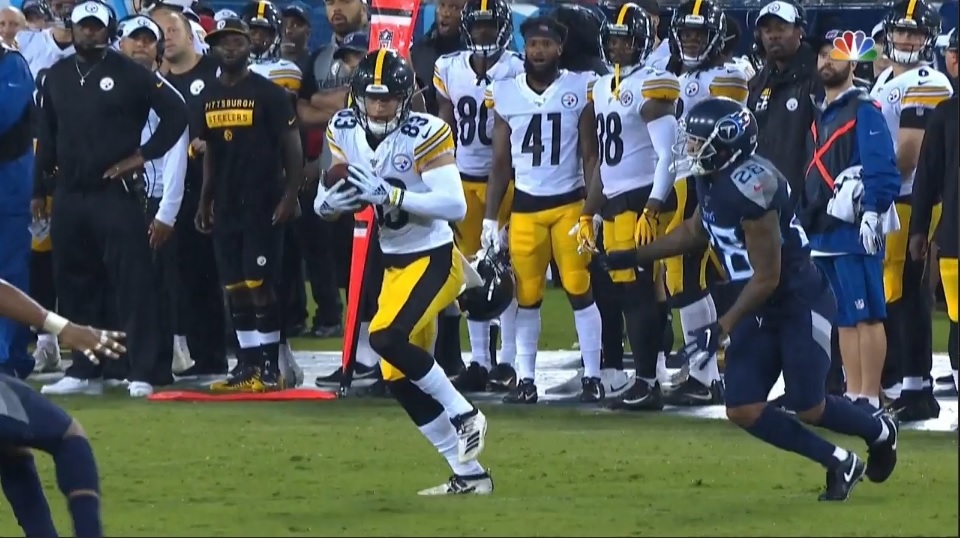 Conditions were less than ideal Sunday night in Nashville, but the Pittsburgh Steelers got a good look at the starters against the Tennessee Titans in the only real tune-up they’ll get for the regular season.

Offensively, the starters were a bit underwhelming, but defensively the Steelers’ unit looks fast, physical, and primed for a big year in 2019.

Aside from the starters, the backups looked really strong throughout the night as the Steelers cruised to an 18-6 win over the Titans, thanks to a dominant defensive performance.

Like I do after every game, I’ll take a shot at grading each position group on their performances in the game.

Ben Roethlisberger is the first to admit that he missed some throws Sunday night, but that was to be expected in his first real action of the season.

The Steelers kept it simple for Roethlisberger, utilizing a number of short, quick throws on screens and crossing routes to let him get into rhythm. Unfortunately, Roethlisberger struggled to hit some of those throws, firing behind Ryan Switzer on a bubble screen, and throwing late across the middle to Vance McDonald a few times.

Fortunately for Roethlisberger and the Steelers, the veteran quarterback delivered a strike to JuJu Smith-Schuster for a touchdown on a post route in his final throw of the night.

Mason Rudolph came in after Roethlisberger and played really well, throwing a dime to James Washington for a 43-yard touchdown on a post route, finishing 6-for-9 on the night for 75 yards, one touchdown and one interception. The interception appeared to be a miscommunication with Washington as Rudolph through an out-route to the sideline, while Washington didn’t break out, instead running a deep curl, leading to the pick from rookie Amani Hooker.

Joshua Dobbs looked strong in his performance as well, evading rushes left and right, utilizing his legs to extend plays. His best throw was a scramble to his left, hitting Trey Griffey on the left sideline for a gain of 23 yards. Dobbs did turn the ball over though, throwing an interception to Mike Jordan in the second half.

Overall, it wasn’t a great performance for the quarterbacks group, but it wasn’t a bad one either.

James Conner had a great day with the starters, rushing for 41 yards on just five carries, including a long 21-yard romp around right end that seemed to spark the Steelers’ offense.

Once again, Conner looks really good after contact and avoids tackles with the best of them, adding two catches for 15 yards in the win.

Jaylen Samuels was mostly quiet as a rusher, but did finish with four carries for 16 yards, including a long of 11 yards on the night.

In place of the injured Benny Snell, Trey Edmunds received most of the short-yardage carries and looked powerful, albeit without explosion on the night. Edmunds carried the ball six times for 12 yards and was targeted once out of the backfield. If he’s going to make this team, it won’t be because of his abilities as a running back.

Closing out the night, Malik Williams and Trevon McMillian underwhelmed. I was especially disappointed with Williams, who flashed last week but fizzled out this week on a wet field.

This group really, really impressed me, and it had nothing to do with the starters.

Sure, JuJu finished with a team-high four catches for 37 yards and a touchdown, and Washington added the 41-yard touchdown from Rudolph, but I came away really impressed with guys like Brandon Reilly and Trey Griffey.

Reilly showed some physicality late in the game, shrugging off a defender to get back inside for a 30-yard catch, while Griffey worked himself open on Dobbs’ scramble and got three feet down for his 23-yard catch that officials inexplicably said he didn’t get two feet in before changing the call after a successful Mike Tomlin challenge.

I liked the usage of Johnny Holton on the night too, letting him use his speed on crossing routes across the formation designed to get him the ball in space and let him work after the catch. He struggled to shake loose, but I liked the plan there.

The Steelers’ tight ends didn’t have much of an impact in the win as they received just five total targets (Zach Gentry with three, Vance McDonald with two) and hauled in just one catch, which was a 15-yard catch through contact by Gentry.

On that lone catch we saw what Gentry can be down the field, which is a possession receiver that knows how to use his size to his advantage to box defenders out.

Aside from that though, it was hard to really tell how the group did as blockers due to the weird camera angle and the general pace of a preseason game with all of the changing parts. That’s why they get an average grade of C, rather than a lazy “incomplete” grade.

The starting offensive line looked pretty darn solid, as expected, while the backups performed well for the most part. As a whole, the Steelers’ offensive line didn’t allow a single sack on the night, and allowed just two quarterback hits in the win.

Sure, some of that credit should go to Dobbs avoiding at least two sacks in the second half thanks to pressures allowed by Derwin Gray and JC Hassenauer, but as a complete unit the offensive line played very well.

Gray did struggle through the first two watches that I did. He was beaten once by speed on the failed double-reverse to Diontae Spencer that was wiped out due to penalty, and then was pushed back by a bull rush to flush Dobbs.

I really like what I’m seeing from Zach Banner right now. He’s a hulking presence that moves really well since he dropped so much weight, and has a mean streak to his game that is fun to watch.

The starting trio of Cam Heyward, Javon Hargrave, and Stephon Tuitt was as dominant as it gets on Sunday night.

Tuitt and Heyward stunted off of each other, leading to Tuitt’s sack for a safety on Marcus Mariota, before Tuitt then added another sack later in the first half. Combined, the two defensive ends finished with six total tackles and three sacks on the night. Good luck blocking these guys together when both are healthy.

Daniel McCullers had a really strong game against the run, finishing with four tackles on the night, really anchoring against the run. If he can lock that performance in the rest of the season, look out. There’s few who can block him when he’s playing possessed like he did in Nashville.

I didn’t see much to write home about from the backups, aside from a fumble recovery by Tyson Alualu, but that performance by the starters was simply spectacular.

Tuzar Skipper is really making a case to crack the 53-man roster over a guy like Anthony Chickillo. I know Chickillo has the special teams experience, but Skipper is the better pass rusher and run defender and needs to grab that spot.

Skipper really dominated on Sunday night and was arguably the best player on the field, finishing with four tackles, a sack, a quarterback hit, and a forced fumble. I also saw him dump the right tackle with speed into power at least twice in the second half.

Backups Robert Spillane and Ulysses Gilbert III played very well on the night, combining for nine tackles and a sack in the win. Spillane got revenge on his former team late in the game, blitzing up the middle to sack Logan Woodside.

Tyler Matakevich and Vince Williams also played really well on the night, especially Williams, who showed off some serious burst on a delayed blitz to track down Ryan Tannehill for a sack.

There’s just so much depth here at this point that it seems unfair at times.

Thanks to a terrific pass rush and some strong coverage, the defensive backs had a good night in Nashville, holding the Titans to just 179 yards through the air, including just three 20+ yard receptions.

Terrell Edmunds continues to look darn good. Edmunds broke up a pass across the middle right before Tuitt’s sack for a safety, showcasing the click and close ability he has coming downhill.

Justin Layne was picked on quite a bit by Tennessee, but he held up well, finishing with four stops and a pass breakup. After that rough first NFL game, he’s looked comfortable defensively.

Kameron Kelly is making this team and is going to have a big role on the defense. Kelly finished with four stops and forced a fumble on Corey Davis in the first half that Davis jumped on. Kelly’s forced fumble helped keep Davis from converting the third down reception into a first down.

Steven Nelson broke up a pass and looked very comfortable on the night in his second action of the preseason, while Artie Burns was up and down on the night.

Jordan Berry shook off a rough first punt to dominate on the night, finishing with an average of 50 yards per punt, downing one at the 20-yard line. He has this job locked up folks. Arguing against that is wasting time and energy.

Ian Berryman had a nice night, dropping both of his punts inside the 20-yard line, but the directional kicking and the overall touch just don’t appear to be there right now.

On kick returns, Ryan Switzer and the Steelers’ return unit continues to really, really struggle. Switzer is a good returner historically, but he’s struggling to find any type of space on kick returns.

Switzer did break off a 20-yard punt return on the night, showing some burst and shake in the open field,

The Steelers’ field goal block unit had a blunder late in the game, placing 12 men on the field, resulting in a second try for the Titans. That’s a mistake that needs to get cleaned up.

The one issue I really had on the night was the kick coverage unit that allowed a 46-yard return to Khalif Raymond that forced Chris Boswell to make the tackle. Let’s not do that again.