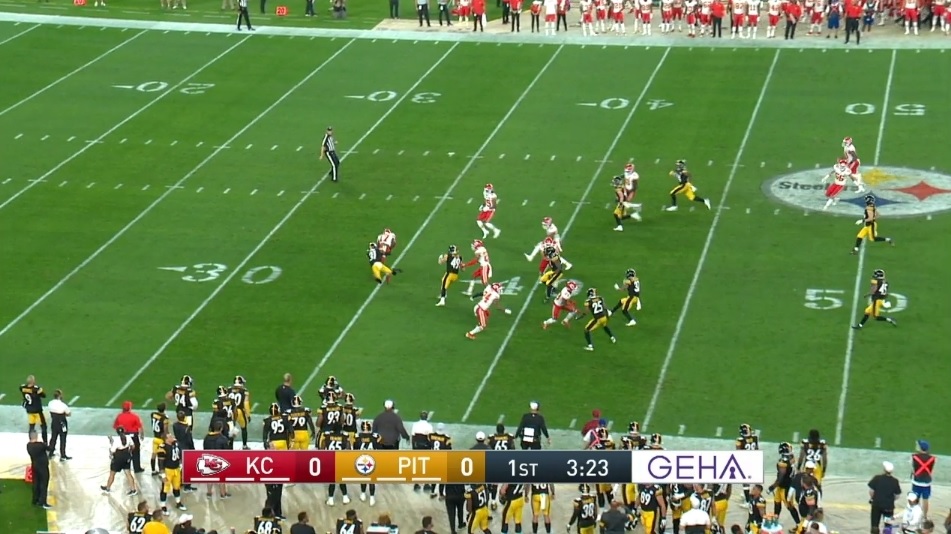 After a rough first showing in the tackling department in the first week of the preseason against the Tampa Bay Buccaneers, the Pittsburgh Steelers really cleaned it up in Week 2 against the Kansas City Chiefs.

Pittsburgh’s starting defensive unit missed just one tackle, and that came when Bud Dupree shot into the backfield off of the edge and just missed bringing down rookie Darwin Thompson for a tackle for loss.

Aside from Dupree’s miss, no player projected to be a starter missed a tackle in extended action, which is a great sign of things to come moving forward.

Let’s take a look at the Week 2 missed tackles report.

Against the Chiefs, Allen looked like a guy fighting desperately for a roster spot. Allen played out of control at times and tried to make a play on the ball in some odd situations, rather than playing the man and wrapping up for the stop.

Same for Locke, who is an absolute hammer from the safety position, but generally struggles in the open field to hit the nail on the head, so to speak.

I already mentioned Dupree’s miss, while Robert Spillane’s miss came on a punt early in the game when he missed grabbing De’Anthony Thomas’s legs right after the punt was caught.

I wanted to highlight Justin Layne’s miss, not only because he has a lot riding on him in the future, but because he had such a rough game in Week 1 before really bouncing back in Week 2.

Layne’s miss came in the first quarter on a punt from Jordan Berry. Layne did a good job of getting downfield quickly to line up a shot on fellow rookie Mecole Hardman.

Layne gets his arms around Hardman’s waist but can’t quite twist him to the ground. While it goes as a miss, it’s a great job by Layne to slow down the speedy returner, which allows rookie Benny Snell Jr. to make a strong tackle in the open field, negating a possible long return.

Layne’s confidence was way up in Week 2, especially defensively. He looked very solid besides recording a missed tackle.

Offensively, the Steelers had a good day in the forced missed tackles department, forcing 13 missed to win the matchup with a +7 advantage.

Diontae Spencer is a freakshow on punt returns. Along with his game-breaking speed, Spencer has some serious shiftiness to his game, allowing him to make the first defender miss, setting himself up for a chance to record a long gain on the return.

Here in the third quarter, Spencer absolutely undresses this Chiefs defender in the open field shortly after fielding the punt.

I’m a really big fan of what Spencer brings in the return game. I’d like to see him get a chance at returning kicks, but we can clearly see how dynamic he is returning punts.

Then, late in the game, I got my first look at running back Malik Williams, and man was I impressed.

Look, he’s probably not making the 53-man roster, and might not even make the practice squad, but Williams has some serious juice as a runner.

Watch the footwork on both forced misses here. That’s a thing of beauty right there from a guy who doesn’t get much burn in games.

I love the patience and the quick feet to make the blitzing defender miss initially. After he forces the first miss, he doesn’t panic and instead picks his way through the hole before undressing a second defender in space, resulting in a solid gain on the ground.

We know Williams is an athletic specimen for the position, but I didn’t think he had this type of juice to his game. I’m hoping to see more of him moving forward, simply because he’s an intriguing option for RB4.