The Pittsburgh Steelers will play their first of four 2019 preseason games Friday night at Heinz Field against the Tampa Bay Buccaneers and ahead of that contest taking place the team released their first depth chart Tuesday after their training camp practice ended. As usual, it’s important not to read very much at all into these preseason depth charts as even head coach Mike Tomlin says as much. That disclaimer aside, there are just a few things worth pointing out.

Backup quarterback: Joshua Dobbs, as expected, will enter the first preseason game of 2019 as the backup behind starter Ben Roethlisberger. He is followed by Mason Rudolph and Devlin Hodges. Tomlin will probably say during his Wednesday press conference that Dobbs will start Friday night against the Buccaneers and that he’ll be followed by Rudolph and then possibly by Hodges.

Right tackle: Matt Feiler is the current starter at right tackle now that Marcus Gilbert has been jettisoned. That’s not surprising, however, as Feiler started 10 games last season in place of an injured Gilbert. Don’t read too much into second-year tackle Chukwuma Okorafor not being listed right behind Feiler as he’s likely considered to be the top swing tackle right now. Should starting left tackle Alejandro Villanueva not play Friday night against the Buccaneers, there’s a good chance that Okorafor starts in his place and opposite Feiler. We’ll see.

Wide receiver: Maybe the most interesting thing when it comes to the listings at this position is the fact that Ryan Switzer is listed one spot ahead of Eli Rogers. Both are primarily slot wide receivers, however, so don’t get caught up in that observation.

Inside linebackers: Nobody should be surprised to see rookie Devin Bush listed as a second-teamer. With Vince Williams currently dealing with a hamstring injury, Bush might get the start alongside Barron Friday night in the preseason opener.

Free safety: Is Marcus Allen really considered the backup free safety behind Sean Davis? It’s kind of doubtful, but once again, we’ll see. With Davis likely to sit out Friday night with a finger injury, it will be interesting to see if Kameron Kelly gets the start in his place as he’s seemingly played a lot with the starters so far during training camp with Davis sidelined.

Returners: Not surprisingly, Switzer is listed as the top punt and kickoff returner. Fellow wide receiver Diontae Spencer, however, is likely to get a chance to do both Friday night against the Buccaneers

If you decided to read this far, congratulations. Once again, these depth charts are relatively meaningless and pretty much provided for media consumption. I’m sure it might produce some discussion in the comments below as well.

Tomlin will hold his pre-game press conference prior to the team’s Wednesday practice and during it he might let us know the players that will definitely sit out Friday night against the Buccaneers. It’s a good bet that Roethlisberger, wide receiver Donte Moncrief (finger), Davis (finger), outside linebacker T.J. Watt will be just a few of several players who will not see action Friday night. 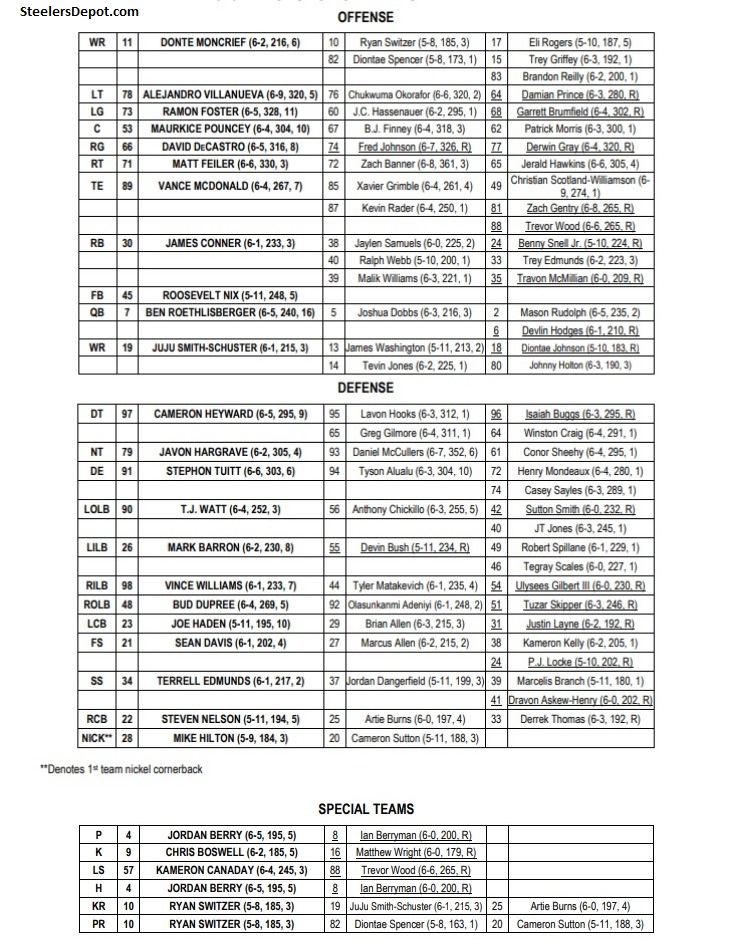