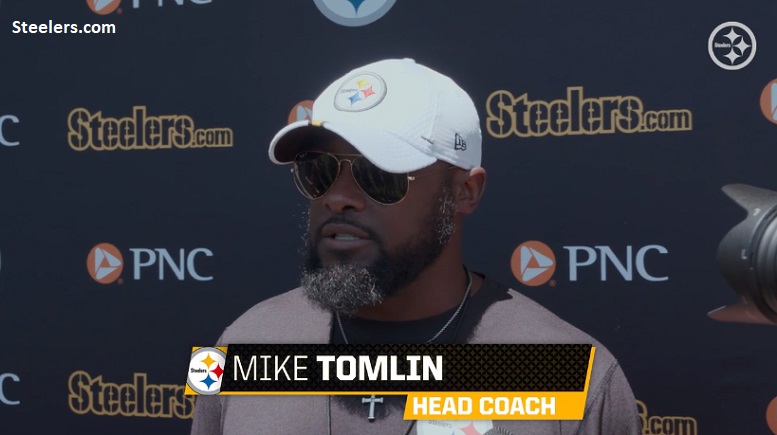 The Pittsburgh Steelers will open their 2019 regular season 20 days from tonight with a Sunday night road game against the New England Patriots. With their upcoming third preseason game also being a road game that will take place on a Sunday night, the Steelers are using this week as essentially a dry run for the team so that those that ultimately wind up being part of the team that will play against the Patriots in Week 1 know exactly what to expect a few weeks from now.

“Man, it’s good to be back here at the South Side and continue with the team development process,” Tomlin said at the conclusion of Monday’s practice at the UPMC Rooney Sports Complex. “To get back in the comforts of home and allow the guys to familiarize themselves with the services and the facility provided here for them in terms of staying available in preparation. We’re going through a simulation week this week like a lot of teams this week in the preseason. It’s good because we have a Sunday game, so Wednesday can be Wednesday, Thursday can be Thursday.

“We as a staff can develop plans here over the next day and a half relative to the schematics. So, it’ll be a good exercise for all of us coaches and players as we prepare to travel to Tennessee. We are also faced with an opportunity to play in a road setting for the first time this year. And we got a lot of respect for that and the National Football League. So, we’ll be doing some things in preparation to highlight that in an effort to prepare the guys for what it’s like to be in a hostile environment.”

The Steelers will certainly play their Week 1 game in a hostile environment as that Sunday night contest against the Patriots at Gillette Stadium in Foxboro will include the home team raising their championship banner as part of the pregame festivities. The Steelers played in similar circumstances to open the 2015 season as that year they played the Patriots on the road in a Week 1 Thursday night game that included New England raising a Super Bowl champion banner as part of those pregame festivities.

Including one playoff meeting, the Steelers are 1-4 against the Patriots on the road since Tomlin became the team’s head coach in 2007. That one win included the Patriots being without the services of Tom Brady due to injury. The Steelers, however, did beat the Patriots last season at Heinz Field and should have beaten them in the same venue in 2017. That 2017 loss included the late touchdown by tight end Jesse James being overturned via the review process. Currently, the Steelers are 6-point road underdogs to the Patriots in Week 1 at most sportsbooks.

While it might not seem like a huge deal, the Steelers being able to exactly mimic this week what will happen a few weeks from now can’t be totally discarded. With Monday essentially being treated by the Steelers as if it were a bonus day due to them last playing Saturday night, Tomlin indicated on Monday that the players will be given Tuesday off as if it were a normal week in the NFL.

“This morning we watched the game tape, reviewed the game tape with them and made some necessary corrections and we’ll get centered and focused as we start game planning about rotations and who’s doing what,” Tomlin said. “That’ll be a part of this evening and tomorrow’s preparation stuff from the coach’s perspective. We’ll ask the guys to get rested, to enjoy their day off and come in Wednesday ready to work.”

We don’t yet  know which starters will ultimately play this coming Sunday night against the Tennessee Titans but with this upcoming contest being the annual tuneup game for the regular season, odds are good that all starters healthy enough to play will do so. Quarterback Ben Roethlisberger is expected to make his 2019 preseason debut Sunday night against the Titans. Last year in the team’s third preseason game, which was also against the Titans, Roethlisberger played the first three offensive series, a total of 26 plays. That’s exactly how many plays that center Maurkice Pouncey played. Pouncey, like Roethlisberger, has yet to play so far this preseason.

If Tomlin were to make this week a true practice run for Week 1, he would hold a Tuesday press conference at noon to discuss the upcoming Sunday game. It won’t happen that way, however, as Tomlin won’t be conducting his next pregame press conference until Friday afternoon at around 12:45 p.m. EST. Tomlin, however, will next address the media at the conclusion of Wednesday’s practice and the same goes for Thursday, according to the team.