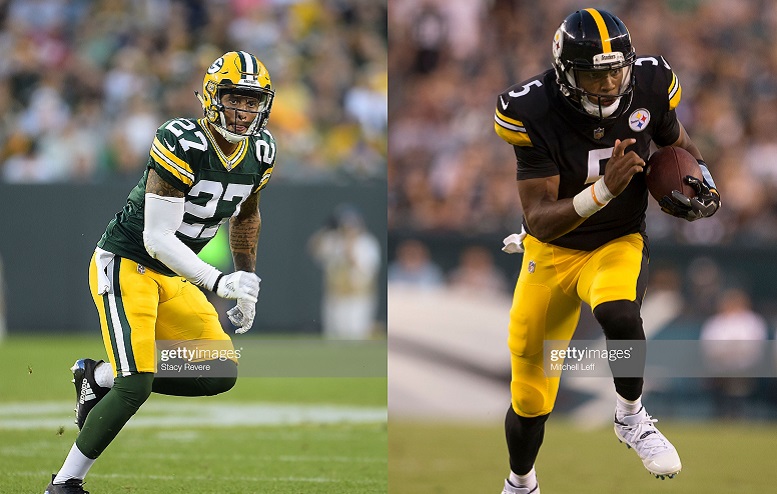 It’s been an interesting last 18 hours in the NFL to say the least. The main most-recent NFL news story still making the heavy rounds is the abrupt retirement Saturday night of Indianapolis Colts quarterback Andrew Luck at the age of 29. A secondary story and not as surprising one that’s making the rounds Sunday morning is the Green Bay Packers moving on from safety Josh Jones, a former second-round draft pick of theirs, after just two seasons. Curiously enough, both recent headlines have fans of the Pittsburgh Steelers wondering if either will have an immediate impact on their team, and here’s why.

With Luck’s sudden retirement, the Colts are left with a quarterback depth chart that includes Jacoby Brissett, Chad Kelly and Phillip Walker. While Brissett is now set to be the Colts starter moving forward, both Kelly and Walker aren’t ideal No. 2 quarterbacks and thus Indianapolis will likely look to add a better option in the coming days and weeks. Would the Colts be interested in trading for Steelers backup quarterback Joshua Dobbs? Do the Colts view Dobbs as a legitimate No. 2 and a perfect complement to Brissett? I suppose it’s possible.

Would the Steelers even be willing to part ways with Dobbs after just two seasons for a sixth or seventh-round selection? I guess it all depends on what they could get in return and if they would indeed be comfortable with quarterback Devlin Hodges, who has represented himself fine this offseason, as their No. 3 behind starter Ben Roethlisberger and Mason Rudolph.

As for the Packers moving on from Jones Sunday morning, that move is not overly surprising. Jones hasn’t been happy with how the Packers have used him to date and even sat out the team’s 2019 OTA practices and he even reportedly requested that Green Bay trade him. So far during the 2019 preseason Jones has not played a single snap and the media outlets have listed him as being sidelined with an illness. That’s a little bit of a red flag in and of itself.

While the Steelers seemingly had interest in Jones prior to the 2017 NFL Draft, as evidenced by them reportedly bringing him to Pittsburgh for a visit that year, there is another dot that somewhat connects the young safety to the organization. The Steelers new running backs coach, Eddie Faulkner, probably knows all about Jones and what makes him tick due to time spent together at North Carolina State. In fact, Faulkner is listed as the one being responsible for recruiting Jones to North Carolina State.

Those links to the Steelers aside, the fact that the Packers couldn’t even get as much as a seventh-round draft pick for Jones and his lowly 2019 base salary of $849,856 is quite a red flag. With him now set to show up on the NFL transaction sheet as waived, one would still think that there will be at least one team out there willing to claim him and maybe one ahead of the Steelers in the order.

Jones’ first two seasons in the NFL with the Packers included him playing all over the place in their defense. He played both safety spots, some slot cornerback, a little bit of outside cornerback, some linebacker and of course on special teams. The jack of all trades Jones, however, has been a master of none of them in the NFL to date. The Steelers do like those SPARQy, position flexible defensive players with draft pedigree, however, and Jones does come with a low investment cost.

If the Steelers did put in a winning waiver claim on Jones, they would then have less than a week to decide if he’s worth keeping on their 53-man roster for 2019. In short, Jones would need to show in the Steelers preseason finale that he can be a special teams contributor right out of the chute and that assumes whatever illness he’s currently dealing with magically disappears in the next few days.

So, will the Steelers be doing any Josh-ing around in the next few days? While it’s not unthinkable, I would bet against both Dobbs being traded, and Jones being claimed by the Steelers as we sit here Sunday afternoon. That said, I think I have outlined enough reasons above as to why none of us should be shocked if some Josh-ing around does wind up taking place in the next few days. Just don’t get your hopes up and am not joshing you when it comes to me telling all of you that.